“Skin Of My Teeth”  is the first song and video from Lovato’s forthcoming eighth studio album, HOLY FVCK, which arrives August 19. And they’re holding nothing back: “Demi leaves rehab again/ When is this shit gonna end?” they snarl in the first verse over a Hole guitar riff.

The song vividly references Lovato’s tumultuous battle with addiction. In July 2018, Lovato suffered from a near-fatal drug overdose, which took their months to recover from. After releasing an album and a docu-series about their journey to recovery called “Dancing With the Devil,” Lovato said that they relapsed and had to return to a treatment center for a second time. All of which makes lines such as “The reaper knocks on my door/ because I’m addicted to more” and  “I don’t need you to keep score/ When I’m the one who’s at war” all the more brazen. 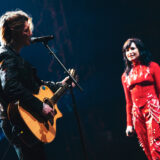 Earlier this week, Lovato performed their new single first the time live on the Tonight Show with Jimmy Fallon. Lovato ripped through the song in skintight leather with a gleeming black guitar in hand (one of four axes on the stage that night.)

“It’s really going back to my roots and the sound of my first and second album,” Lovato said to Jimmy Fallon. “I’ve definitely bee nthrough a ton — that’s no secret to the world — and I actually, you know, after going through even more stuff last year. I came out of treatment again and I realized I really want to do this for myself. And I want to make the best album possible, something that really represents who I am, and I think the best way to do that … is clean and sober.”