Just as they intended, and never once doubted, 5 Seconds of Summer has lasted significantly longer than five seconds.

In the over-300 million seconds since they formed in 2011, the Australian pop-rock quartet’s output has left fans with four albums, two live records, seven EPs, and enough tour dates to see this world from top to bottom. They’ve been on one hell of an impressive run ever since their self-titled 2014 debut that made them global superstars, and now they’re just months from launching their fifth LP as a band.

But when you’re running like 5SOS has for the last decade, you need a breather. Thankfully, they were able to catch their breath on the way to creating 5SOS5, an opportunity that bassist Calum Hood could’ve used when guitarist Michael Clifford smoked him in the 800-meter dash in Beijing 2008 on the Xbox 360 that entertained them during their creative retreat in Joshua Tree.

“Being able to not make music sometimes on this record was just as important as making the actual music was,” Clifford tells SPIN. “I think when we are out there — when we commit to doing something — we just will do nothing but that. When we first got out on the trip [in 2020], every single day, we were just slamming in there. We were just making sure that we’re getting every single idea that we can. It gets to a point where you need to take a second. Us all being in the same house together — being able to just do nothing together — was really therapeutic.” 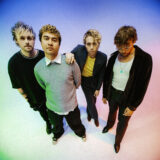 5SOS5 came to the band during the relatively stress-free and creatively refreshing timeout in California. It allowed Hood, Clifford, lead vocalist Luke Hemmings and drummer Ashton Irwin time to unwind, reflect on the many changes in their lives since 2020’s Calm and take in some welcomed motivation from a groundskeeper named Byron they were housing with.

Those moments of serenity are responsible for recent singles like the of pop-rock punch “Me Myself & I” and stadium anthem “Complete Mess.” Ahead of the album’s September release date, SPIN spoke with the guys to put it all in perspective.

SPIN: You’ve all talked about the groundskeeper Byron, and what he meant to you, on the road to this album. Do you think this record as a whole would’ve sounded the same if it hadn’t been for a groundskeeper being a bit of a motivator for you guys in Joshua Tree?
Ashton Irwin: Every guy has a different perspective on this, obviously. But Byron, for me, was on his own journey. And it’s easy to think that us meeting him was all about the band’s journey. But in many ways, I feel like Byron’s journey was affected deeply by us as well. And I know it’s crazy. But everything that was happening in his life seemingly had synchronicities with what was happening in our lives. Whether it be a healing process, and at that time, were just healing the band’s DNA and attempting to reconnect and hang out and take it slow and work out what was what we were doing, what we were trying to produce, what kind of music and impact we were trying to have. But he taught us a lot. He brought us into his home, you know, so this guy, he was a legend, and we learned to respect him. But obviously, we shared a lot of synchronicities in our journey. So we were both meant to be there at that time, I reckon.

Michael, you said you were playing Xbox 360 games while writing this album, too. What specifically? Do you ever find inspiration even within something like a video game during recording time?
Michael Clifford: I think video games offer the opposite of inspiration, which is just being able to just completely shut off for a little bit. And I think sometimes that’s really important. We were playing Left 4 Dead on the projector, it’s pretty fun. And then we played the 2008 [Summer] Olympics, I forget which one it was. You remember, Calum?

Calum Hood: I was robbed of that gold medal in the 800.

I was looking at the title 5SOS5, it is a palindrome. I’d imagine this was intentional, but besides this being the fifth record, is there a deeper meaning behind something reading the same thing forward as it does reversed?
Irwin: Yeah, we thought about it. But sometimes in life, there are things that are naturally occurring, that require less effort. And it doesn’t mean that it’s worse. It’s more the conscious awareness of allowing things to be what they just are. And that is also a practice of patience, and discipline, and all these things from inside the process. And for a long time, during the process, we were trying to bend the name elsewhere. But universally, what we were perceiving is our fan base, there had already been literally hundreds of thousands of messages and tweets about 5SOS5, and it existed way before we created 5SOS5. But sometimes with songwriting, and the philosophy that goes behind that, the truth is always right in front of you. It’s just sitting there. And you just have to build the awareness inside the process to work out what is best for this project. And we, at the end, were like, ‘Oh my God, it is 5SOS5, it’s beautiful. It’s a really important step statement for us to name an album 5SOS as well. Because in many ways, we haven’t used that in the title. But we always refer to the band as 5SOS instead of Five Seconds of Summer. And in many ways, it’s a debut album for 5SOS.

Clifford: That’s such a good point that Ash said where just because it’s right in front of you, and it feels easy, doesn’t mean it’s not as good. That kind of was our thesis going into making this album. The music was coming so easily. And it was just fun and enjoyable and a fucking amazing experience. And I think that just calling it 5SOS5 kind of represents this idea of everything just coming to us as it’s meant to, you know what I mean? Instead of having to go to war with ourselves musically and fighting these battles, it was just happening, and we were just allowing it to come.

Irwin: Also, in terms of pop-rock bands, in terms of bands. We wanted the most memorable title possible. And that doesn’t mean complicated. It probably means simplified. So we went with this because we think it sticks to the brain.

You’ve called this the best album you’ve ever made as a band. Is there ever a certain point in creating when you realize you’re making a body of work that will be your best, or is that not something you come across until after?
Hood: I think it should be a constant feeling. As you’re creating the album, you shouldn’t be thinking about what the album is going to be at the end, you should be thinking about what you’re doing at that moment. But there’s times we step out of that bubble and you’re looking in. Like, I’ve had many realizations throughout writing this album where I step outside, and you see the guys working on music. And you kind of just take in how amazing it is of a situation to be in to be even there creating with guys you’ve known for your whole life, with people that will take the music in and relate to in all different walks of life.

And to be able to be in that moment, and know it is the most true representation of who you are collectively as a band, is such a special thing. So I selfishly think that every album that we’ve made has, at that moment, been the best album that we’ve made. And I think it’ll remain like that. Just because it’s relative to who you are at that point of time. But I think this album is definitely one that will live with a lot of people for a long time.

Now I’d like to congratulate you on the band’s ten-year anniversary. We’ve seen great bands that last a couple years, and then we have some bands that last a lifetime, like the Rolling Stones, still out there touring. You’ve said longevity was always your intention. Is there pride in knowing you were right, even when you said people used to doubt 5SOS would last?
Irwin: It really doesn’t matter what other people think. It doesn’t. Because if you put your intentions in a truthful place, the manifestations are more aligned with your actions. And our actions have only ever been based on the philosophy of longevity. So we make hundreds of decisions, micro-decisions, every day based on the cornerstone of “Will this help us have a long career? Will this help us water our garden and our fans? Will this help us grow as artists and lyricists? Are we comparing ourselves?” That answer should be “No.” And if we are, let’s work out how to just be us. Because that’s what this kind of record is, it’s surrendering to the real nature of the group, and the real tonality, and the real songwriting. And it’s just being us and it’s taking ownership of it.

We’ve always been brave enough to speak our intentions into the world, for instance, saying, “I want to be in this band for a long time.” But it is up to us to understand why. Why would you say a thing like that? And it often comes back to really pure intentions. And the minute you lose those pure intentions…Like I love playing live music. I love being in a creative environment. I love being able to release music, simple things. If you lose touch with them, you probably lost touch with your true goals like longevity. We just try to maintain good philosophies and we talk about it and we make our decisions based on the things that we think will make us a legendary band.

And what is it that you feel you’ve learned most about yourself as a band through creating this record?
Luke Hemmings: I think the main thing I’ve learned about this band is that we have something very special and unique in what we do, and how we make music, and the feeling that we can evoke from people that listen to us and come see us live. That has been tremendously important for me to understand and to realize in making this album. We just sort of backed ourselves. We’ve written all of the albums, but I think this one, we just took it into our own hands and sort of didn’t try to make it something it wasn’t. We just did what came naturally to us. I think it’s the most the band sounded like ourselves.