Home » New Music » Reviews » One Nation Under a Stylus

Vinyl Nation, a new documentary from directors Kevin Smokler and Christopher Boone, is, as the title may suggest, as much a chronicle about a growing community than it is about the medium of vinyl records. To be clear, the history of vinyl pressing, from its early market dominance to its later decline due to the advent of the compact disc, to its glorious return over the past decade — nearly 42 million records were sold in 2021(outselling CDs for the first time since 1986!) — is thoroughly covered (occasionally bordering on repetitive) by the filmmakers. The focus, however, is more on the collectors.

The film opens outside the Mills Record Company in Kansas City. It’s Record Store Day, an annual celebration of independent record stores across the country, and a long line of collectors, obsessives, and enthusiasts have arrived at dawn for a chance to buy freshly pressed, RSD-only releases from their favorite bands. These are the members of the resurgence, of vinyl nation.

The portrait of the collector painted in the film is multifaceted: as touched upon throughout its 92-minute run time, a vinyl collector is not only the stereotypical overweight, stringy-haired honkey male. They are millennial black women; excitable boys in David Bowie T-shirts, rocking along to music older than their parents; green-haired ladies who tear up over the thought of their collection outliving them (not shown are boyfriends tasked with taking in said collection). Subjects are presented as surrounded by their cherished holdings. They speak of their paraphernalia as if it might possibly be listening. Nobody behaves like this around their DVD collection. Books, maybe. 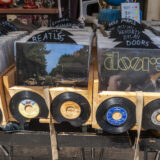 They speak of the superiority of the vinyl sound. It’s “warmth” — something that still isn’t quite defined or, frankly, even believable (and I say this as somebody who owns hundreds of records) — is something a compact disc could never emulate. More to that point, even Superchunk bassist and co-founder of Merge Records admits that, “…colored vinyl doesn’t sound as good.”

None of this really matters. Like religion, the beliefs expressed by the cast of the movie are the sort that have been repeated enough times by enough disciples that they become dogma. What matters, again, like religion, is that they believe it. Because you have to believe in something. It’s human nature and whatnot.

There are multiple trips to a record pressing plant (one was probably enough) where we see how the sausages are made. What might surprise the uninitiated is that most of these factory jobs are occupied by women. Perhaps a holdover of WWII days? Maybe there was a missed opportunity to get to know a few of these Rosie the Record Pressers? Perhaps. I would have most been interested to know if the line workers are themselves collectors. Most likely so for those working at Jack White’s Third Man Records (the Post-Empire bluesman is not featured, but looms heavily in the section filmed at his Nashville reliquary).

What does the future hold for the vinyl record? Will sales continue to trend upward? Or is a bubble about to burst? Vinyl Nation gives us no answers…because how could it? Like a fighter on the ropes, bloodied and wobbly-legged, but able to summon enough strength to land a decisive blow, nobody saw the comeback of vinyl. Which, of course, is a testament to those believers; a congregation whose faith never wavered and was rewarded with a resurrection of a once-dormant product.

Maybe that “warmth” is the conviction of the collector, accepting communion in the form of a needle drop. Theirs is a conviction that nothing truly ever dies (records can last for hundreds of years). Only the collector leaves this mortal coil. And their boyfriends, of course, but not before moving a bunch of crates into their apartment.