Rainsford Is Over the ‘Sad Girl’ Era

Rainsford seems like the L.A. girl who has it all: the perfect family (her mother is Andie MacDowell), the perfect Instagram (she’s a model), and even the perfect soul (she adopts stray kittens.) But as she explores a future in pop music, her lyrics about life’s imperfections are, oddly enough, her best feature.

Take “Brutal,” the 31-year-old’s hard-charging duet with the Norwegian pop singer Anna From the North. “I’m crying to a song that I used to dance to,” Rainsford intones in her bruising lower register. The song is reminiscent of Dua Lipa, Robyn, and Usher. She implores a lover to cut through the ambiguity and give her a straight answer (“brutal is better than confused,” they sing in unison.)

Musically, “Brutal” is a no-brainer for an album single, but Rainsford isn’t so sure. “A lot of the music that I have put out so far has been very ‘sad girl,’” Rainsford tells SPIN. “I wrote a lot of songs in heartache and that felt really important—and it was at the time—but I want to write stuff that comes from a more joyful place. I’m also just happier now.” A lot of the sunnier material comes from her pandemic boyfriend, who inspired her 2020 song “Oh My God” (“I think that I could be your Aphrodite/ Kissin’ me is sweeter than an ice cream.”)

Between acting and modeling gigs, the rising singer also has over 80 unreleased demos sitting in a folder on her laptop. A lot of the songs, like “Brutal” and “2 Cents,” rehash the gaslighting and paranoia of previous relationships. They may be great songs. But is that the energy she wants to put out in 2022? 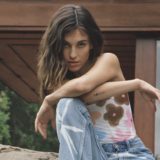 Rainsford, born Rainey Qualley, grew up in Montana with her younger sister, actress Margaret Qualley. She loved Broadway musicals, films, and their soundtracks, including The Wizard of Oz, Grease, and Annie. As she got older, those tastes turned to Kate Bush, Prince, Etta James, and Charli XCX. “I’ve always found solace in listening to music, dancing, and sharing my experiences, thoughts, feelings, and my humanity through music and being able to connect with other people.”

In 2018, Rainsford quietly released her first EP, Emotional Support Animal. It’s a sonic precursor to some of the themes she’s built on: secrets, drunken lust, and pastel fantasies. And she’s tapped her model friends to add their creative flair. Cara Delevigne directed her video for “Crying In the Mirror,” which starred Kaia Gerber and her sister. Social media sensation Devon Lee Carlson is featured dancing in “Oh My God.” The common theme with all of these videos? Those people who seem to have it all often don’t.

The freedom to use her voice, on her own terms, and on her own schedule is completely different from her acting gigs. “Whenever I have a song that I’m like, ‘OK, I really like this one,’ why don’t I put it out in a month? I don’t really have anything to adhere to besides my own feelings and intuition.”

When she has a feeling—whether heartbreak, love for her sister, or passion for a lover—music has become her creative outlet. “I think my taste changes all the time and what I want to say changes all the time. I’ve released songs when I felt like I really really liked them and I wanted to share them.”

But too much freedom can get in the way of progress. And as her own creative director, Rainsford is wrestling with how much she wants to share. “I want to put people onto a different kind of sound, but I also don’t think I can fully do that until I put out what I’ve been working on for the past several years because it just seems like a shame to not have anyone ever hear it,” she says. Rainsford is actually slated to perform some of her songs live next week, during three dates in Manchester (April 19), London (April 20), and Paris (April 23).

“I feel like I need to purge myself of everything that I’ve created so far before I can start fresh. What I want to do is go through everything that I have so far, fix the little things that I need to, and put it all out to then have the freedom and space to explore something else.”