“The Road Goes On Forever, and the Party Never Ends,” sang roots-rocker Robert Earl Keen. And for over two decades, it’s been an apt summation of the Greensky Bluegrass life, on and off the stage — until 2021, when the road ended, and the party caught an early Uber. For chief songwriter/mandolinist Paul Hoffman, who turned 40 last month, COVID cancellations forced the self-proclaimed “life of the party” to turn insular, facing a future no musician should have to contemplate: What if this is the end of concert-going as we know it?

In their 22nd year, Greensky has been doing it longer and harder than most. In 2000, the band formed in Michigan as a three-piece with Hoffman, guitarist Dave Bruzza and banjo player Michael Arlen Bont, adding bassist Mike Devol and dobroist Anders Beck several years later. The collective was never strictly bluegrass, or married to any rigid descriptor of it. What they took from the genre was more about spirit, as Hoffman’s often dark, hard-bitten lyrics, crossed with hootenanny-styled live shows, exuded an all-are-welcome, dance-our-cares-away vibe. It’s a party they rode hard, maxing out at 180 shows a year once upon a time. The road dog dedication — and penchant for stretching songs out live — caught on with the jam band scene in the late 2000s, and the guys established an unquestionably loyal and rowdy base.

For the band that’s not bluegrass, not jam, but not exactly rock, the formula works (Greensky regularly sells out multiple dates at Red Rocks) and continues to work on Stress Dreams, their eighth studio album. The lyrics repeatedly touch on loss of time and regret, but foot-stomp picking, joyous harmonies, and an optimistic lust for life lead the band home. We spoke to Hoffman about Stress Dreams, the music that has shaped his life, and skateboarding to the Dirty Dancing soundtrack.

SPIN: What’s the first song or album that made you truly fall in love with music?
Paul Hoffman: Man, the first tapes I owned were Tiffany and Wilson Phillips. I was really into pop music as a kid. I also used to make my mom mixtapes of all her Beatles records, as I was the tech-savvy millennial who taught them how to use their stereos. The record that I really remember loving was Counting Crows’ August and Everything After. It came out when I was 12, which is when I started playing guitar. I had the printed chords to every single song on that record. During quarantine I started listening to it again, so I was rocking out to “Round Here” around the house. When I listen to it now, I feel like I hear some of my songwriting tricks. “Mr. Jones” is on that record, and that’s the song that’s kind of embarrassing to like, but is still really great.

Are you still rocking out to Tiffany or some of that sugary ‘80s pop?
I was into some really embarrassing soundtracks as a kid too. I joke with my friends about this, so if you print it, it’ll be really funny. I have memories of skateboarding in my basement, listening to the Dirty Dancing soundtrack. I guess it makes sense because I was also a theater kid, but if there’s something to really humble me, skateboarding to “Hungry Eyes” is right up there. The first CD I remember buying was The Bodyguard soundtrack. I was a sucker for the showtunes!

Growing up in Michigan, was there stuff you were basically forced to listen to, that you can’t stand to this day?
Kid Rock annoys me now, but I liked that first album. I’m pretty eclectic, and it’s hard for me to outright hate something. My dad was really into Cat Stevens and Fleetwood Mac, so I got a lot of good influences from them. I didn’t know what bluegrass was until I bought a mandolin and joined a bluegrass band. Even when I was a teenager and started seeing Phish and got into the Grateful Dead, I’ve never been a snob about pop music. You’ll catch me in a guilty moment today listening to One Direction or Nick Jonas. The pop sensibility to some of that music is undeniable, and I just love it. We recently played Madonna’s “Borderline” at a show, and who can deny that it’s a great friggin song?

Did you have a “romantic/make-out” mix as a teenager?
The Wallflowers! “One Headlight.” That was some good neckin’ music. I remember being in a basement with the lights off, on the floor, listening to that song: “We can drive it home…with one headlight!” That’s a damn fine album too. When I write songs, before the band touches them, they’re probably a lot like that rootsy, alt-folk stuff that hit hard in 1994-95. Those great melodies and chord structures are ingrained in me.

As a teenager, were you more into rowdy drinking songs or spaced-out, trippy albums?
In high school, I was getting high and listening to tons of Pink Floyd, Led Zeppelin’s BBC Sessions. I attribute Pink Floyd to a lot of my songwriting style, which is dark, depressing lyrics with psychedelic vibes. Looking back, it seems so uncool, me going out to lunch in my high school car, blasting The Final Cut. It’s even more depressing than The Wall.

So, you were a brooding teen? Did you go emo at any point?
Very emo. I was really into theater, and to this day, my concept of a good performance or piece of music is more based on emotion than style. My music is cathartic, and a way for me to emote feelings. Theater is very in line with that. I recorded an album in high school that was really emo-pop and dark. It’s pretty cliche, but I was really into Jim Morrison and his poetry. That stuff is obviously really dark and filled with death. I wore fake leather pants to high school. I pictured myself as the romantic, tortured artist emo kid, not the makeup-wearing, Marilyn Manson type. Shit, I used to carry around a Keats novel between classes and was reading William Blake for fun. Very tortured. [Laughs.]

How did you find the jam band scene?
It’s hard to remember how it happened, but one day I was just in the Jam Band Club. Trading shows and all that. My first Phish show was in the Fall of ’98. I had a pretty tight, raging, musical group of friends, and we’d hit Deer Creek and Alpine Valley in the summer. It was six of us who did everything together. We were basically told that we were supposed to trip together and listen to Dark Side of the Moon. I remember being in school, taking a test high on acid, and listening to this really psychedelic version of “St. Stephen” by the Grateful Dead. I’m almost afraid to admit that I was tripping in school, but I did it a couple times. Now I can’t let my mom read this interview. I remember whiteboards were new at the time, and in math class, my teacher liked to use all kinds of different colors, so that was pretty psychedelic. It should be noted that I failed that Civics test, listening to “St. Stephen,” while on LSD.

What song can always bring you back from the brink of existential despair?
Phish doing “2001.” I’ve been at shows where shit started to get all weird and heavy, but a Phish jam/funk party to “2001” can always bring me out. It never fails to get me out of that dark mental hole. The whole crew starts to get down, my muscles start to relax, and I shake it off. If I’m clenching my jaw, or holding my neck funny, I just spring out of it. I need an instrumental to come out of it. I can’t not dance to that jam.

As a band, are you still bursting with creativity, or does it come harder with age?
It’s a skill to be creative at this age, as I’ve obviously used a lot of my ideas for songs over the years. I don’t think it’s how old we are, but how long we’ve been doing it. We’re not trying to reinvent the wheel every time because we always want to be ourselves. But there are only so many notes and pleasing chord progressions. Unless we decided to go totally avant-garde, I have that pop sensibility and don’t wanna just do a bunch of weird shit for the sake of being different. Just because I’m not in agony in my basement, pouring my heart out into my newest song like I did 10 years ago, doesn’t mean that I can’t create art from a different place. It’s a skill, like woodworking or architecture.

A glance at the titles on Stress Dreams — including “Absence of Reason,” “Give a Shit,” “Stress Dreams,” and “Get Sad” — read like a songwriter coming unglued.
We went through a lot in 2021: losing all our gigs and the stress of running our business. It became a business when we weren’t just out playing shows and having a great time. There’s been a lot of change. So much of what we were doing for so long felt momentum-based. It’s like running downhill, with so much inertia. Then we had to stop, for the first time ever. The most time we’d taken off in the last 15 years was maybe five weeks, and that included the births of our kids. People would ask if I was scared that music wouldn’t come back. I was more afraid of reflecting on myself.

I’d never spent that much time away from my bandmates, or off the road. I’d simultaneously miss it while reflecting on the choices I’d made in my life. The contemplation of having to do something different with my life was the scariest thing.

Are you comfortable being alone?
I wasn’t alone much because I have a toddler. But I’ve put myself out there as the center of attention, or life of the party, for so long. Having that part of my identity taken away was pretty hard to reconcile. It was also inspiring, and I had to do some work on myself that needed to be done. I just turned 40, so staying up all night and doing wild things had already become less appealing. Naturally, I’m not an up-at-7, asleep-by-9 kinda guy, but I’ve learned how to become that guy. Out of necessity, man. My child wakes up, and she’s like a sponge for energy and information. It’s inspiring but downright exhausting.

Do you still get a giddy thrill with every album release or every time you step onstage? Or have you grown jaded?
I’m still completely in love with it. There’s so many new factors with COVID and touring, like I can’t see all my friends or go out to eat. I can’t go to a bar and meet strangers. I love meeting people after the show and hearing about what our music means to them. Sure, there’s some ego to that, but nobody can deny that great feeling. I love getting onstage, stoking people out, and being the center of attention. There’s nothing like that feeling in the world. 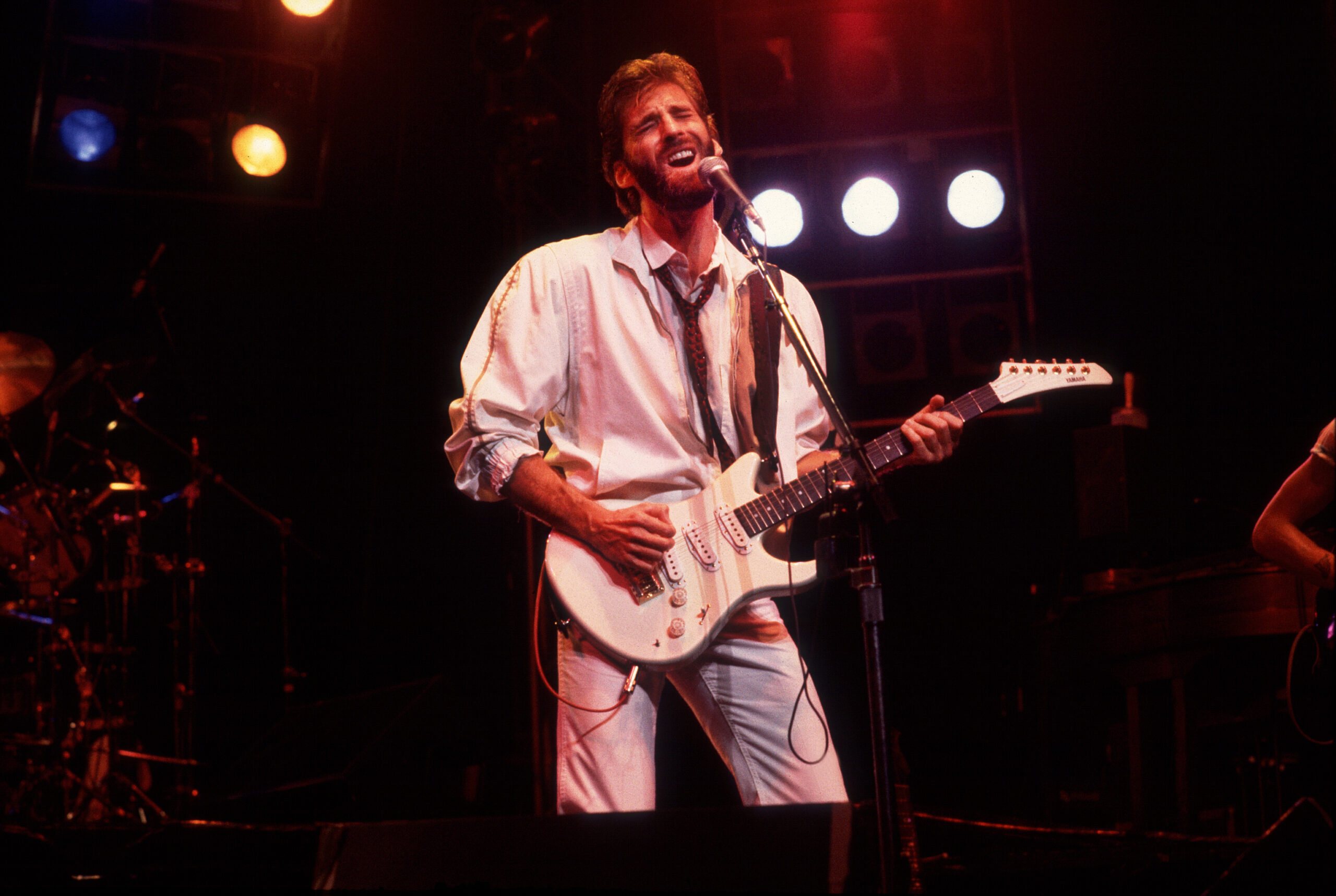