Nathaniel Rateliff isn’t the sort of guy who emotionally skews in either direction. Down the middle. That’s sort of his thing. But even he can admit that following an 18-month stretch where a pandemic prevented him and pretty much every living musician from touring, heading back out on the road for some of 2021 was nothing short of a blessing.

“Yeh, it feels like a success just to be able to tour again,” the singer and frontman for the typically bombastic Night Sweats says over the phone, reflecting on the past year. “We didn’t even know when we’d be able to play shows again or play any kind of live music and then we spent a lot of the summer and fall back in outdoor venues. So that seems like a triumph in its own right.”

Add in the fact that he followed up a poignant and beautiful solo album of singer-songwriter fare, 2020’s And It’s Still Alright, with arguably his best work yet — the Night Sweats’ third LP, The Future — and, at least on the surface, the road for Rateliff is looking smooth headed into the new year. Spend enough time talking to him though and the rough-and-rowdy singer will typically go back to what’s weighing him down. Take, for example, his solo album. Released less than one month before the world effectively shut down to COVID-19, Rateliff finds himself lamenting the fact that, at least as he sees it, the record may have been lost to time. Plus, he only played a handful of shows before touring behind it was canceled.

“I thought the solo project was the best thing I had done so I was excited to share it with people,” he says of an LP that landed him a slot performing solo on Saturday Night Live this past March. “I knew it was going to take a backseat or get shelved at that point. So that was pretty upsetting to me. I hope it’s something people come back to… or at least was something people got a chance to listen to and it brought some semblance of solace.” 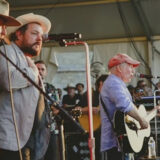 Much of his discouragement could be attributed to the fact that And It’s Still Alright is essentially a mournful tribute record to the late producer —and one of Rateliff’s close friends — Richard Swift.

“I feel like part of the process of grieving or working through some of the things the songs on that record was dealing with about the loss of Richard was by playing the songs in front of people,” Rateliff explains. “It’s why I had looked forward to playing them in front of people because I feel like that’s part of the process of going through all of it.” Unfortunately for Rateliff, 10 shows into the tour, just as he says he was starting to slip into a groove, the tour was canceled. “It was a bummer.”

Lucky for Rateliff, a home studio at his Denver digs provided a necessary reprieve from the depressing reality of the situation. It was here, Rateliff says, that he gathered his Night Sweats bandmates in mid-2020 and began piecing together what became their 2021 LP, The Future.

“I felt pretty fortunate,” he says. “I bought my first home three years ago and the first thing I did was put a studio in the house.” In fact, Rateliff structured his entire house around the studio — namely so that his whole band could stay there and work on music. And that’s exactly what they did during one stretch of the pandemic: “We made sure we were all safe and our bubble was pretty small.”

When he finally returned to the road this past summer with the Night Sweats, Rateliff says, it was a double-edged sword. On one hand, he was, of course, thrilled to be back in front of his adoring fans. But he admits it was a tough transition. Not only, he notes, because it was not unlike getting back on a bike, but also because the persona he inhabits when fronting the Night Sweats is a decidedly different one than when he’s performing his solo fare.

Whereas he’s a far more reserved, methodical and introspective musician as a solo, folk-leaning singer-songwriter, Rateliff with the Night Sweats is a lively, outsize character. And yes, he refers to it as a character. “I certainly have a lot of judgment on that Night Sweats character that is me,” he admits. “Especially as far as what I didn’t want him to be. It was definitely different to get back into that character after going back to being a singer-songwriter like I used to be.”

Not that Rateliff isn’t stoked to be heading out on the road in 2022 behind The Future. Still, in typical Rateliff fashion, he has some reservations. Namely about the type of material on the new album and how it will go over with fans. “Well, yeah, the songs are quite a bit different than the other Night Sweats material so it’s interesting to figure out how they’re all going to work together as far as the dynamic of the show,” he explains. “How do I keep people interested even if the material is not that upbeat? But I like exploring all that stuff and trying to figure that out.”

And is he excited about what lies ahead for 2022? Kind of.

“There is excitement there, but it comes with a bit of nervousness because we’ve established ourselves as a certain thing,” he says of returning to the road behind the new LP. “And if you move away from that original direction, it can feel confusing for the audience,” he says. “So I’m hoping people just stick with us and we’ll continue to try to deliver what we think is good material and good performances.”

Not exactly the most uplifting of sentiments, sure. But for Rateliff, well, it’s a step in the right direction.