For Goo Goo Dolls’ John Rzeznik, he never intended to make a Christmas album, but he needed a challenge.

“I think we were all looking for some sort of solace and comfort during [COVID], and I love Christmas,” the bandleader says over the phone from his New Jersey home. While he and his collaborators remained in their own bubble which could admittedly be “a pain in the ass,” it was an experiment in process that he learned to embrace. “I barely played any guitar on record because I couldn’t,” he recalls. “I don’t understand that kind of music.” Instead, he absorbed what he could from musicians who were “better than him.”

The album was also something that generally kept him busy during the pandemic — that and helping to save the movie theater in the New Jersey town where he resides (and this writer grew up in) — compiling Rarities (a double album of B-sides and live tracks released in June) and working on an all-new Goo Goo Dolls record. “You don’t see a lot of B-side stuff from us because if a song is crap, and I think it’s crap, it’s not gonna get out there,” Rzeznik insists.

Released earlier in November, It’s Christmas All Over combines the classic ethos of Christmas music the 55-year-old musician has adored since his childhood with a “trashy” and “fun” twist. Still, he knows it’s not for everyone. 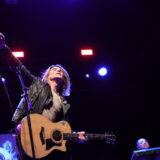 “Obviously, there’s people that think it’s stupid, and they’re entitled to their opinions,” he notes. “But I’m very proud of it.” In essence, it sums up the way that Rzeznik feels about the Goo Goo Dolls: While they were never harbingers of “cool,” they’ve garnered a dedicated fanbase for more than 30 years — and hits to match.

In a phone conversation with SPIN, Rzeznik detailed the making of his Christmas album, the continued appreciation of “Iris” — due in no small part to Phoebe Bridgers — and working on the band’s next record.

SPIN: What was the impetus to release a Christmas album?
John Rzeznik: Well, someone asked us to do a Christmas song, and I didn’t want to do just a regular old thing. I wanted to try to get that serious vibe of an old record. I had to do a lot of reading and talking to people about how to make something sound like that, but still retain the modern kind of loudness to it. I wanted it to be a little bit trashy sounding and fun, have a few moments of schlock and all those things that make Christmas great. Why does the world need another Christmas record? I don’t know. It probably didn’t. I just wanted to do it. It was a challenge, it was fun, and I needed to make good use of my time during the pandemic.

Following the 2020 presidential election, Phoebe Bridgers and Maggie Rogers released a cover of “Iris” for charity. How did the release affect the Goo Goo Dolls?
Well, first of all, [Phoebe] did a great job. She’s great at what she does. I like that the song still resonates with people. When they asked if they could use it because it was a charity thing, it was like, “I don’t want any money from it.” So, that was cool, too, that she did that. Anytime somebody who’s the next generation of musicians does something that puts the spotlight back on the original, it has unintended consequences. I thought it was cool. I was happy that she did it for charity.

Have you talked to her directly about it or discussed performing it live together?
No, I haven’t. I’m kind of shy about asking people for things. Like, how the hell do I get a hold of Phoebe Bridgers?

It’s so funny how “Iris” has had this stronghold on an entire generation. What do you consider its impact to be over the past 20+ years?
When you see a teenager at your show singing the song that was on the radio when they were born, and you see them there with their parents, It’s interesting to me. It makes me feel uncool, like “We used to play at CBGB, now we got the whole family showing up.” But that song, there’s no way to intentionally tap into a nerve like that. That song was really a gift. It was a really, crazy, weird time in my life, and then this song just came out of nowhere. The only reason I did it was because it was going to go on a soundtrack that U2, Peter Gabriel and Alanis Morissette were on. And I was like, “Well, I just want to be on an album with those guys.” I never expected that song to do what it did. In a lot of ways, it overshadowed a lot of work that came after it, but at the same time, it helped propel us to having a long career, which is great. We’ve never been the biggest fans doing arena tours, but we’ve been consistently working since I was 25. [That song] has had the biggest impact on my life. Sometimes I get a little bummed that the song was so much bigger than the band ever got. But, then I go, “Shut up, and be grateful.” I’m just grateful that I have a career.

What was the process of compiling Rarities like? Were there songs on the record you kind of hesitated to share?
If it’s on there, then it’s cool. We had a closet full of [DAT tapes] in my manager’s office. I went on eBay, and I found a [digital audio tape] player for $400 bucks, and I had it mailed to his office. He started going through all the DAT tapes and finding stuff. In some ways, you got to see things in, a different form — maybe not as slick of a mix of it.

I like the band, but the name actually deterred me from listening to them for a while.
Well, try having the name “Goo Goo Dolls,” and see how many people don’t invite you to their party.

You’ve been instrumental in helping to turn my hometown movie theater — in Westfield — into a performing arts center. Will we see a Goo Goo Dolls performance in there anytime soon?
The rest of my band owes me so. So if we can do a show and raise some money to help get that place up and running again. It’s quite a vision that they all have for it. [The Tee and] Charles Addams Foundation is really helping out a lot with that. I just thought it was cool. It’s nice to be part of a community.

Now that you live in Westfield, what’s your perspective on The Watcher story?
This town is interesting. I never really thought about it, I thought it was funny in a way. But somebody bought the house, and said, “You can watch me all you want, but I got a gun or something.” It’s just so weird, man. Yeah. I don’t really pay that much thought.

You’re currently working on your next album. What can fans anticipate from that?
I produced most of it myself. I worked with the guitar player in the band, Brad [Fernquist], and the engineer Chris, but it was more or less a self-production. Let’s put it this way: I love it. I hope our fans really like it, but I don’t believe it’s gonna get played on the radio. I was always such a fan of, “how tight can I wind this hook so that we can get it on the radio?” I don’t care about genres of music, I care about hooks. I just wanted to blow out the walls of everything that I’ve done and really experiment a lot. I made this record for us and for my own satisfaction in a weird way — maybe that’s a bit self-indulgent — and I made it for our fans. I’ve been a musician and songwriter putting records out for 30 years, so I’m not trying to chase anything new, but at some point in time, if you’re going to keep playing, and you’re not going to retire, you have to go into the business of selling nostalgia. I have no problem with that, but I’m not ready to do it yet. I’m not ready to go 100% into that game.