On the Record is a new SPIN feature where we pick an album we think is fantastic, and ask the artist to share the stories behind it.

Singer-songwriter and guitarist John R. Miller’s debut Depreciated tells the story of a life well-lived. Don’t let the album title fool you. No matter how dark the journey that brought him to Depreciated, the songs are filled with hope and wonder, set against a folks-blues, Nashville countrypolitan and swamp-rock backdrop. Like this interview, his music reflects a refreshingly raw honesty, reflectiveness, and the undeniable beauty in discovery and growth. Musically, Miller is at the top of his game. While Depreciated is perfectly unadorned, it’s decorated with top collaborators on congas, fiddle, mandolin and then some.

Justin Francis (Leon Bridges, Kacey Musgraves, Margo Price) and guitarist Adam Meisterhans produced Depreciated—with a cinematic, serendipitous story to go with it. As Francis was mixing the album, another producer was walking past, and was so spellbound he passed Miller’s music onto an A&R person for Concord. And that’s how Miller was signed.

John R. Miller goes “On the Record” with us to discuss the simplistic magic of Depreciated. 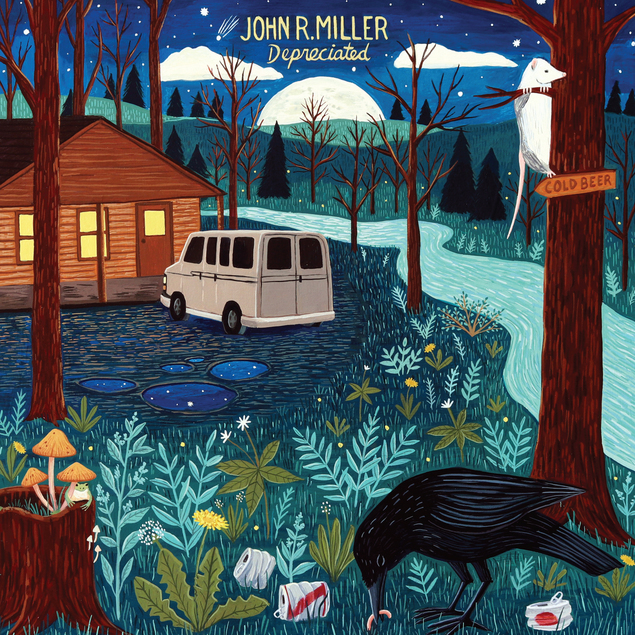 What’s your personal story that brought you to make this album?
I had been without a regular band for a few years, mostly taking touring gigs as a bass player to earn a living, spending the rest of my time washing dishes, playing darts and drinking at the two local bars we had where I lived, in a little town by the Potomac and Shenandoah Rivers in West Virginia. One was always the bar you started your night in, and the other was the bar in which you ended it, usually falling out the front door at closing time and stumbling home. “Shenandoah Shakedown” was written about the dissolution of a relationship against the backdrop of those rivers and bars, told in hallucinatory vignettes. The town’s small enough that everybody quite literally knows everybody else to some extent, which as you might imagine can be both a blessing and a curse. “Looking Over My Shoulder” reflects on that time of recklessness and restlessness, and trying to avoid an old flame while revisiting a place that’s about the size of four square blocks. Eventually I followed some friends down to Nashville to find some more stable work and to try to break myself of a worsening drinking problem; over the next couple years most of these songs started to take shape in the wake of moving far away from home for the first time and sobering up, for all intents and purposes. I couch surfed and lived in some pretty gnarly rooms for a bit, working odd jobs in bars and restaurants, landscaping, delivering flowers, etc., a period documented in the song “Old Dance Floor.”

Eventually I found a wonderful and supportive creative community in Kentucky, and began spending a lot of time traveling and playing my songs up there. I met some great musician buddies, we formed a band, bought a rusty old conversion van (the search for which was the inspiration for the song “Half Ton Van”) and eventually between touring and working a bunch I was able to save up enough money to make a record. I called on old pals Justin Francis to engineer and Adam Meisterhans to co-produce, and we brought the band into Sound Emporium in January 2020 to get the songs down. We tracked everything live in the studio over three days, and it came together very naturally from there.

Why does the world need Depreciated now?
I feel like a lot of us are looking for some connection with each other right now, trying to find our collective way to the light switch in the big dark room. Whether or not this album ends up being anything particularly special to anybody else, I think it was my hardest attempt so far at creating something that could maybe try to foster that connection. A lot of the record is about displacement and not knowing where you’re supposed to be or what you’re supposed to be doing. I was trying to find common threads through the lens of my own experiences, in hopes that other people might find something familiar in it. I was also trying to make myself feel better in hopes that it could make somebody else feel better, too.

Is there a story behind the title?
Depreciated comes from a line in one of the songs, and I felt it represented nicely one of the record’s overarching themes — how in spite of our best efforts, everything diminishes over time, and value is subjective.

Who deserves special credit for making this album?
My partner Chloe Edmonstone, who plays fiddle on the album and with the band, has been there since the start of this whole thing and has helped me figure out a ton of stuff I either didn’t fully understand or couldn’t manage on my own. She’s a great fiddler, and has been more supportive than I could ever ask of anyone, and an incredible source of wisdom.

Any special guests?
Robbie Crowell added Wurlitzer and B3 on a handful of songs, and Russ Pahl added pedal steel on a couple. Both of those gentlemen have an otherworldly skill and musicality, and their contributions really tied the room together, so to speak – it was an honor to have them play on the album.

What are you most proud of on this record?
It turned out much more cohesive than it seemed like it would at the outset, and wound up telling a story I didn’t even realize we were telling until I was able to step back and look at the whole thing.

What makes this album different from previous works?
It was the first record that I’ve made that was super intentional from start to finish, and the first collection of songs that I’ve had the opportunity to record live with a whole band. I also think the unique array of influences that informed the record ended up being more congruous than I expected. There’s fiddle and mandolin combined with a Wurlitzer and psyched-out electric guitars, which I think is pretty cool.

What’s your favorite song on the record? What’s the story behind it?
One of my favorites on there is “Old Dance Floor,” which is a really fun one to play and sing with the band. It’s a little more lively and electric, and tells the story of two people, each with one foot out the door of a house owned by a pretty awful landlord, trying to figure out how to stay together in spite of external forces seemingly working toward splitting them apart. It’s also about shutting the door on a cycle of self-destructive behavior and moving on.