Passion is an understatement for what Mikey Lion channels through his music. Mikey Lion is on a constant path toward finding enlightenment through music and creating one-of-a-kind experiences to inspire others to find themselves and their purpose in this world. Being both a spiritual warrior and visionary, he’s created a safe and revolutionary space known as the Desert Hearts community – where artists, creatives, and audiophiles can come together and explore free-expression and thinking within music and counter-culture. Read on to find out about Mikey’s biggest musical influences, spiritual guide encounters, his road to creating one of the biggest musical communities on twitch, and more. Be sure to also check out his latest release, “When I’m With You” here.

1. Who is Mikey Lion and what do you stand for?
In the Fall of 2012, I teamed up with partners Marbs, Lee Reynolds, and my younger brother Porky to throw the very first Desert Hearts party. The intention was to spread as much love and positive energy as possible soundtracked to non-stop house and techno in the middle of the Mojave Desert. This message of love must have resonated with all 200 attendees at the time because nine years later, Desert Hearts Festival is now a 5000 person event that I’d put up against any party in the world as the best party on earth.

Along the way I launched Desert Hearts Records in 2014, which I’ve since signed records from my friends, musical heroes, and other world-class dance artists from around the globe. Marking the label’s upcoming 100th release milestone in May 2021 is my debut album titled, ‘For The Love.’ This album represents all the things I’ve learned and loved, touring the globe these past 8 years as a DJ & Producer.

I stand for love, community, and all forms of counter-culture. I’m genuinely interested in making the world a better place and showing people how to live their best lives. 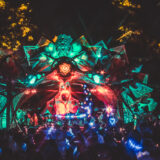 2. Tell us about your sound – where does your style originate from and what have been your biggest visual, social, and sonic influences?

My sound is a bit all over the place as I have so many favorite different kinds of music. I started out as a hip-hop head, bumping Wu-Tang and A Tribe Called Quest records in my bedroom at age 13, but my love affair with house music began at Coachella 2006, when the first time I took ecstasy, Daft Punk live flipped my world upside down and set me on the path I’ve been on ever since. After that, I got really into Pink Floyd and the first time I took LSD, I saw Roger Waters perform The Dark Side Of The Moon. Psychedelics have always played a major role in my life. My life purpose became crystallized during a life-changing psychedelic experience when spirit guides, which manifested in the trees, revealed that the way of the universe is love—and that my life’s purpose was to spread that energy far and wide.

My debut album is called “For The Love” because I truly believe Love is the answer for everything. Love is what we’re here to do on this planet and doing it “For The Love” can only lead to a blessed and happy life for everyone.

3. Was there a definitive turning point to your success? When did you realize the magnitude of your impact within the industry/community?

In 2012 I played Lightning In A Bottle festival and I was literally the last name on the lineup in tiny font. At the time I was still working for my dad in an office but I took that opportunity and ran with it. I remember when I first started playing there were only 50 people on the dance floor, but by the time I finished there were close to 500 people dancing and chanting my name. That was the moment I knew I could do this professionally and I quit my job to pursue DJing full time.

I don’t think I realized my impact on the industry until my first trip to play on the East Coast. Myself and the whole Desert Hearts Crew flew out to DC and New York and played back-to-back sold-out gigs when we had no idea people over there even knew who we were. That was when I kinda say back and thought, “Woah, there’s something we’re doing that’s really resonating with people.” I’ve never taken myself too seriously or tried to be the coolest person in the room. I’ve always just believed in having a good time while spreading positive energy wherever I go and it’s been my guiding light while navigating the industry.

4. You’ve created a well-known and cherished community through your Desert Hearts Label. Tell us about the inception of that idea and the biggest lesson it taught you through its development.

Although I can’t take credit for the entire inception of Desert Hearts whatsoever, a big part of it can be traced back to that psychedelic experience involving spirit guides showing me the way of the universe by talking to me through the trees. At the time, my DH partner, Marbs, and I were throwing a party called Jungle in San Diego where we cut down branches from the trees in my parent’s backyard. During that trip, the trees came alive and told me that I can use them anytime for my parties because what I was using them for was to create a positive impact in the world. This to me was basically the secret of life. As long as what I’m doing is for the love, the universe will always have my back because ultimately that’s what it wants as well. We threw our first Desert Hearts party two months after this experience with the intention of spreading as much love and positive energy as possible, and the rest is history. Spreading love has given me everything I have in this life and still to this day it’s the guiding principle underneath everything I do. Sometimes when things start getting rough, I notice that it’s because I’m straying away from this core belief and that it’s time to realign myself.

5. Desert Hearts typically being an in person festival extravaganza has made a recent digital transition to Twitch in order to stay in existence through the pandemic crisis. It has turned out to be a successful feat – considering that Desert Hearts has ranked as one of the top-performing electronic music channels on the platform with 126K subscribers. How does building the physical DH space differ from building the digital space? What factors played a major part in growing the online community and has the positive response generated any new ideas for the future of DH?

Going from playing music on tour every weekend to playing music strictly on Twitch was quite a surreal experience this past year. Two weeks into the pandemic, my Desert Hearts partners and I decided we were going to hit the streaming game hard by each taking a day of the week and streaming on Twitch for 8+ hours at a time. We didn’t realize it at first, but we essentially created a home for our community to live online and interact with one another 5 days a week. Not only did it allow us to indulge in musical creativity by playing extended sets each night, but it also served as a kind of therapy for each DJ being able to interact with an online audience. It’s a surreal experience because instead of receiving physical feedback from peoples dancing bodies, on Twitch we receive literal, verbal feedback coming straight from people’s thoughts. Even though I can’t see my audience, it still feels very real.

Streaming on Twitch is here to stay and even when I start touring again, I plan on streaming in the middle of the week to stay in touch with my fans, plug my tour dates, and upcoming releases.

6. As we’re looking ahead seeing the light at the end of the tunnel, how are you planning to propel your career forward in 2021?

The light is definitely at the end of the tunnel and I’m starting to book some real gigs for later this year. I’m so excited to release my debut album this year and it will definitely be a pinnacle moment in my career thus far. I’ve been working on this album for a few years now and I can’t wait for it to see the light of day. It’s been a really trying experience for me but I know the challenge will be worth every bit of strife in the end.

7. Is there anything on the horizon that you can share with us?

The next Desert Hearts Festival after such a long hiatus is going to be an absolute ripper. The amount of energy our community has is something I’ve never seen before in dance music and when we finally reunite in person it’s going to be something incredibly special.

8. What do you wish for the future of electronic music? In what ways would you like to see it evolve?

I wish to see a lot more local crews popping up and making a name for themselves worldwide as we’ve done with Desert Hearts. The most important thing that Desert Hearts has given me is a solidified community of friends and family that I can count on all across the world. When I see someone wearing a DH necklace anywhere in the world, I know that they are a good person who I want to get to know better. I wish to see other DJs, artists, and crews building a proper community with their music because I know how powerful it is to give people a place to belong and call home.

9. Any last words for the SPIN-verse?

Check out Mikey Lion’s radical set below! Want more SETS? Head over to SPIN TV to keep up with all the latest and greatest DJs breaking the electronic charts.