Iogi had a musical calling from a very young age that has evolved to become an ambitious and successful coming of age story. Born and raised in Israel, his musical perspective was very much rooted in discovering identity through sound and community. Being part of a small musical scene could easily be perceived as a limitation to most, but it made iogi dream bigger and commit to his craft with laser focus. This Daybreaker first appeared on SPIN’s radar after releasing hit, “everything’s worth it,” which showcased his ability to write dynamic, fun, and meaningful songs that reflect a larger-than-life attitude and inquisitive nature. He took a humble moment to speak with SPIN about his origin story, touring in Israel, signing to Raw Tape Records, hopes for the future and more. Be sure to check out his album, everything’s worth it here.

Who is Iogi and how did you come to life? 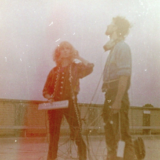 iogi is short for Yogev, which is an Israeli name. i was born in the desert city of Be’er Sheva, in the south of israel. Started my musical journey as a classical violin player, which included playing only classical music till the age of 18. i must say i really didn’t like playing classical music, and pretty much hated practicing on the violin. Around the age of 13, i got my first classical guitar for my Bar Mitzvah, and from that point – my musical taste changed drastically, and i began listening and understanding songs, rather than classical pieces.

i grew up listening a lot to South American music, since both of my parents came from Argentina when they were young parents. i think there is a certain lightness to music in spanish, or music that comes from that continent, and i feel some of that infiltrated my music in a way. The combination of this style of music, meeting Israeli pop and rock from the 70’s, plus getting to know the Beatles at a very very late stage of my life, at around 20, can pretty much describe what influenced my music taste.

What does your typical songwriting/production process look like? Where do you find most of your lyrical inspiration comes from?

Usually, i start with just a loop i play on the drums, which is undoubtedly my favorite instrument. once i have a groove i am happy with and makes me feel right, i start looking for a chord progression or a line on synth or guitar. Once i have that, i start building the structure of the song, in terms of A part, choruses etc. When that’s ready, i usually start mumbling some melody ideas, and they often hide a sonic idea for a lyric. Then i just start fishing words, and start building a story around it. At that point, the song is already a part of me.

While growing up in the small city of Be’er Sheva, you found your passion for music at a very young age. How did your environment shape your artistry and what made you commit to the idea of becoming a musician?

Be’er Sheva is a city that has a very very small music scene. As a young violin player, i used to play in all the city’s memorials and ceremonies, and i was kind a young music star. But i was looking to be cooler than that. At some point, i started to get more involved with the small indie rock music scene there by playing violin, and it felt much better. But the best part was establishing my own progressive rock band at the age of 16, and performing with it in the city.

What’s one perspective you’ve gained this far within your musical career that you consider to be uniquely your own?

Throughout the last decade, i have played as a side musician with Israel’s top artists, and even got to tour with some of them around the world. I think that being aside those amazing musicians, and playing huge shows in front of big crowds, taught me a lot about the music scene, and about the meaning of being an artist. I feel that, in a way, now with my own music I come with an advantage of knowing “how things work” from behind the scenes.

I think that even till now, I don’t feel the feeling of success. Although I have some really nice numbers on the streaming services, I still don’t really feel it on my flesh. In Israel I am considered to be a very unknown indie musician, and it is very hard to get in the more mainstream radio stations. Also, when i released my first album in 2018, I had no intention of being successful or getting to any of the achievements I got to, so every person that listens to my music, reaches me on the street or writes me on instagram – it is still astonishing to me.

Your unique style led you to join the leading label/collective in Tel Aviv – Raw Tape Records. How did this opportunity come to be?

First of all, Raw Tapes is one of the most unique musical families that i know. It is a home that allows you to be what you want and do whatever you want, with no artistic or musical intervention. I know the Raw Tapes family because of the relatively small indie \ hip hop music scene in Tel Aviv, and we started by being very good friends and colleagues, even long before we discussed releasing my album there. Working with them was simply a by-product of our love and friendship, and I think we’re all happy with this relationship.

You’ve been able to tour with some of Israel’s biggest names, such as Idan Raichel and A-WA – Tell us about one of your most cherished touring memories.

With Idan Raichel it was more of a World Music crowd, and with A-WA it was more big festivals and parties. Both of those experiences were amazing and enriching, but if i have to think of one memory – it was with A-WA, we played Pickathon in Portland, and we played a show right after an Andy Shauf set. It was funny, because he was one of my favorite artists at the time, but the concert we were playing after him was almost the complete opposite.

Despite the curses 2020 brought to the collective masses, it also allowed artists to take a step back, reassess, and re-prioritize certain aspects of their personal + creative lives. You were able to release an incredible album, Everything’s Worth It – where did the idea for this LP originate from?

I started working on the album almost two years ago, so basically i didn’t touch it throughout all of 2020. It was laying there, ready and waiting for the right timing to get out there. What did happened this crazy year, is that i had time to work on the art and videos for the singles, and choose wisely the people i want to work with on this.

What significance does the LP carry for you? What are you hoping to achieve with it?

This album is in a way a natural continuation of my debut album, but from a sweeter and more relaxed state of mind. I don’t have any special hopes for it, i just want people to enjoy listening to it, and if it makes them forget the day to day problems of life, even for a few minutes, then i’m a happy person.

In what ways have you changed since the beginning of creating the LP?

Throughout the making of this album, I realised more and more what it the exact vibe i want to create. I understood my character a bit more, and it feels really good.

How do you wish to inspire up and coming artists/producers that are aiming to get their chance in the spotlight?

Although it’s a cliche, i still believe it – there isn’t a right or wrong way of doing things in music and art. If you do what you love, and you do it best – and believe it – only good things will follow.

What’s one piece of advice you’d like to give aspiring creatives that you either got from a mentor or that you wish you would’ve gotten?

As we’re looking ahead, seeing the light at the end of the tunnel, how are you planning to propel your career forward in 2021?

In Israel, everything is pretty much open already because of the vaccine situation. So i’ve scheduled some big release shows for the upcoming months in Israel. Although i had the opportunity to tour around the world as a side musician, my dream is to do the same with my own band and music. so i hope i will be able to do that very very soon.

I am planning some special live performances and cool videos, so stay tuned. im on @iogi_music on instagram 🙂

Consider veganism! or at least go visit a freedom farm near you, it will change your life.

Thanks so much for supporting music, it’s a huge honor for me to be featured on SPIN!

Check out iogi’s hypnotic performance below. For more exclusive sessions, head over to SPIN TV.