The idea came from his father, who was having second thoughts about the name until fate intervened with a 1978 classic by Frankie Beverly & Maze. “On his way home from work, he looked out over the sunset, and it was the most beautiful golden sunset he’d ever seen. And he goes and he turns on the radio, and the song ‘Golden Time of Day’ comes on. And he goes, ‘Oh, fuck, it’s a sign.’” 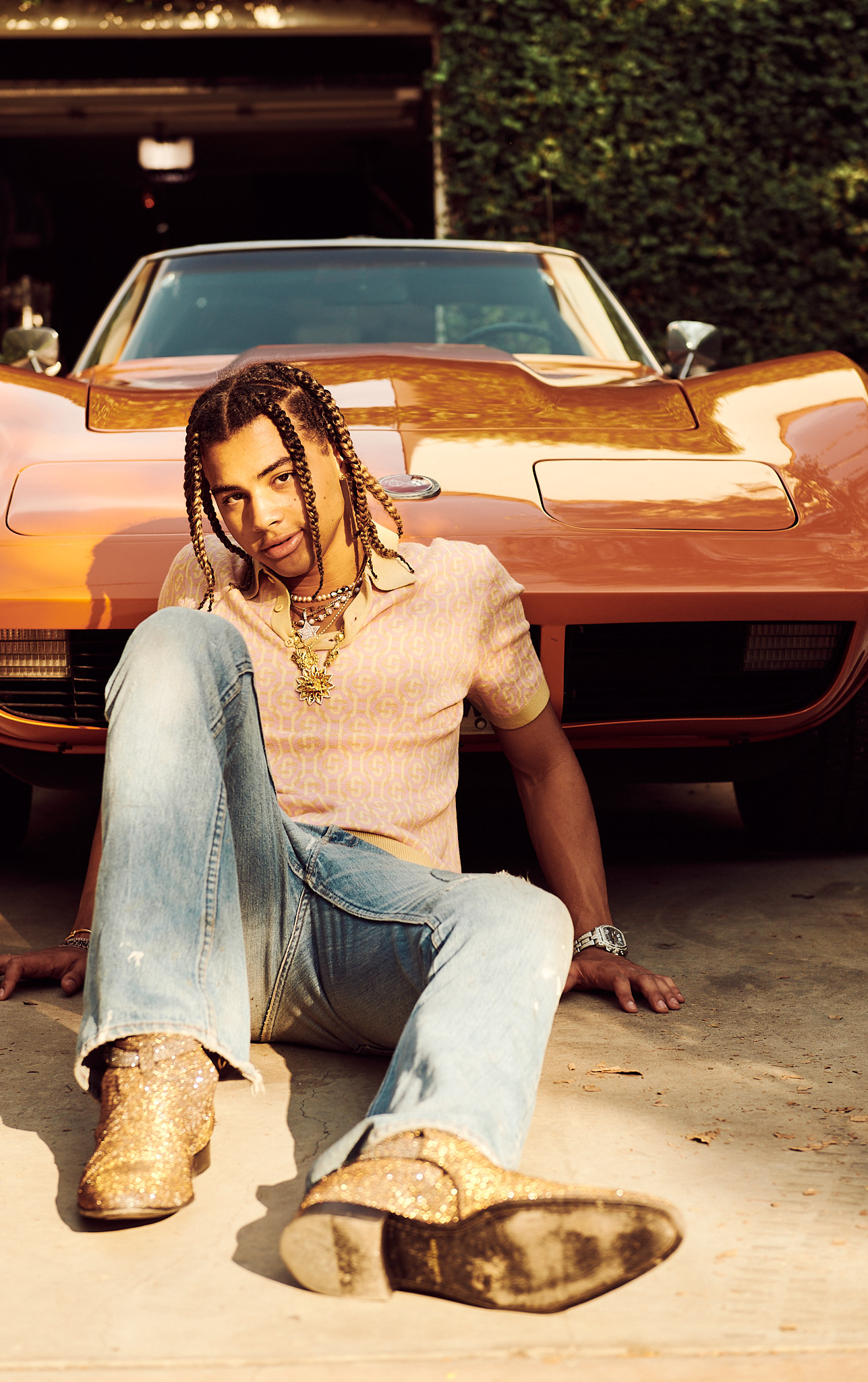 “Mood,” 24kGoldn’s collaboration with Texan rapper Iann Dior, has been No. 1 on the Billboard Hot 100 for five non-consecutive weeks since October. The guitar-driven pop-rap song, produced by Goldn’s frequent collaborators Omer Fedi and Keegan “KBeazy” Bach (along with Blake Slatkin), has reached a rare level of ubiquity with airplay on pop, rhythmic and even alternative radio formats. Justin Bieber even hopped on the song’s official remix.

“Me and Iann were playing Call of Duty, and Omer and KBeazy were making beats. And I hear ‘duh nuh nuh nuh,’” Goldn says of the song’s origins, mimicking the first four notes of the song’s catchy central riff. “So I just start singing it without even realizing it while I’m playing video games, and Omer’s like ‘Yo, that’s fire.’ So I go to lay down my part, and then Iann comes in and does his verse, and then boom, we’re outta here. It was very casual.” 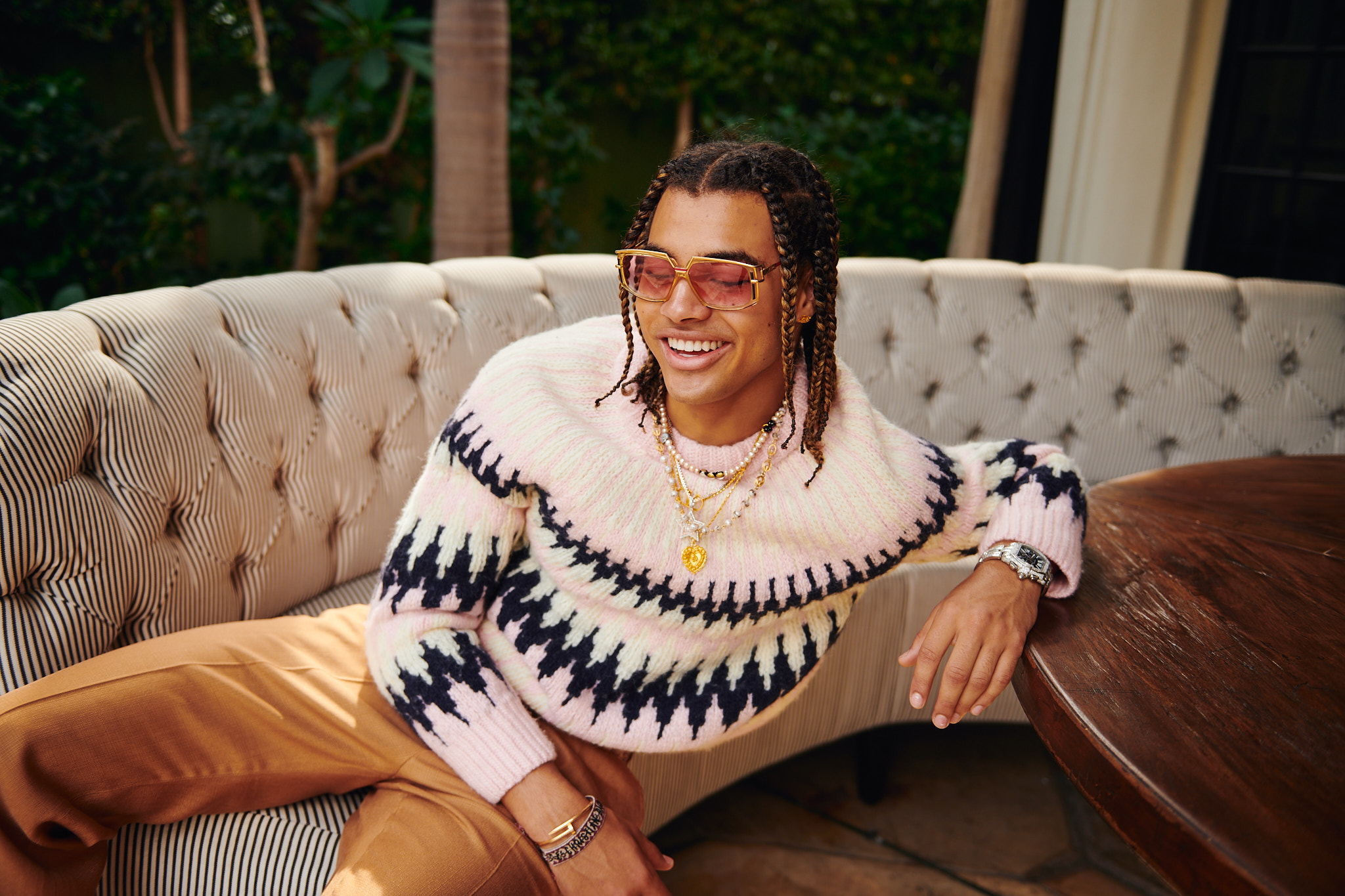 Released in July, “Mood” took off quickly, but the rapper who had entered show business as a child had already been preparing for his big star-making moment seemingly his whole life. “Both my parents, they modeled, like all around the world,” he says. “When they settled down and had me and my sister, they knew that that was a good way for kids to make money for college and stuff like that. So they started putting me in modeling and acting, and I did that until I was maybe a sophomore and junior in high school, right around the time I started picking up music.”

Unsurprisingly, 24kGoldn lists genre-bending rappers like Kanye West and A$AP Rocky among his role models and influences, as well as pop superstars like Michael Jackson and Bruno Mars. When he decided to focus on music over education after a year at USC, he took a page out of the Kanye playbook and turned the experience into his 2019 Dropped Outta College EP. And even after he got a deal with RECORDS, the Sony imprint founded by music industry veteran Barry Weiss, Goldn found himself getting deeply involved in every aspect of his career.

24kGoldn first scraped the lower reaches of the Hot 100 last year with the more conventional melodic trap sound of “Valentino.” But he had to fight for his next single, the guitar-driven “City of Angels,” to go viral, breaking him through to alternative radio and laying the groundwork for the crossover success of “Mood.”

“[The label] didn’t believe in it, so there was no plan to do any videos, no priority playlisting, nothing like that,” he says. “So I took a couple thousand bucks and just started linking up with influencers and running marketing campaigns and making that shit work.” His growing following on social media spilled over to TikTok. In August, he appeared on the cover of XXL’s annual “Freshman Class” issue after winning the online vote for the list’s 10th spot, even though the voting deadline was well before the release of “Mood.” 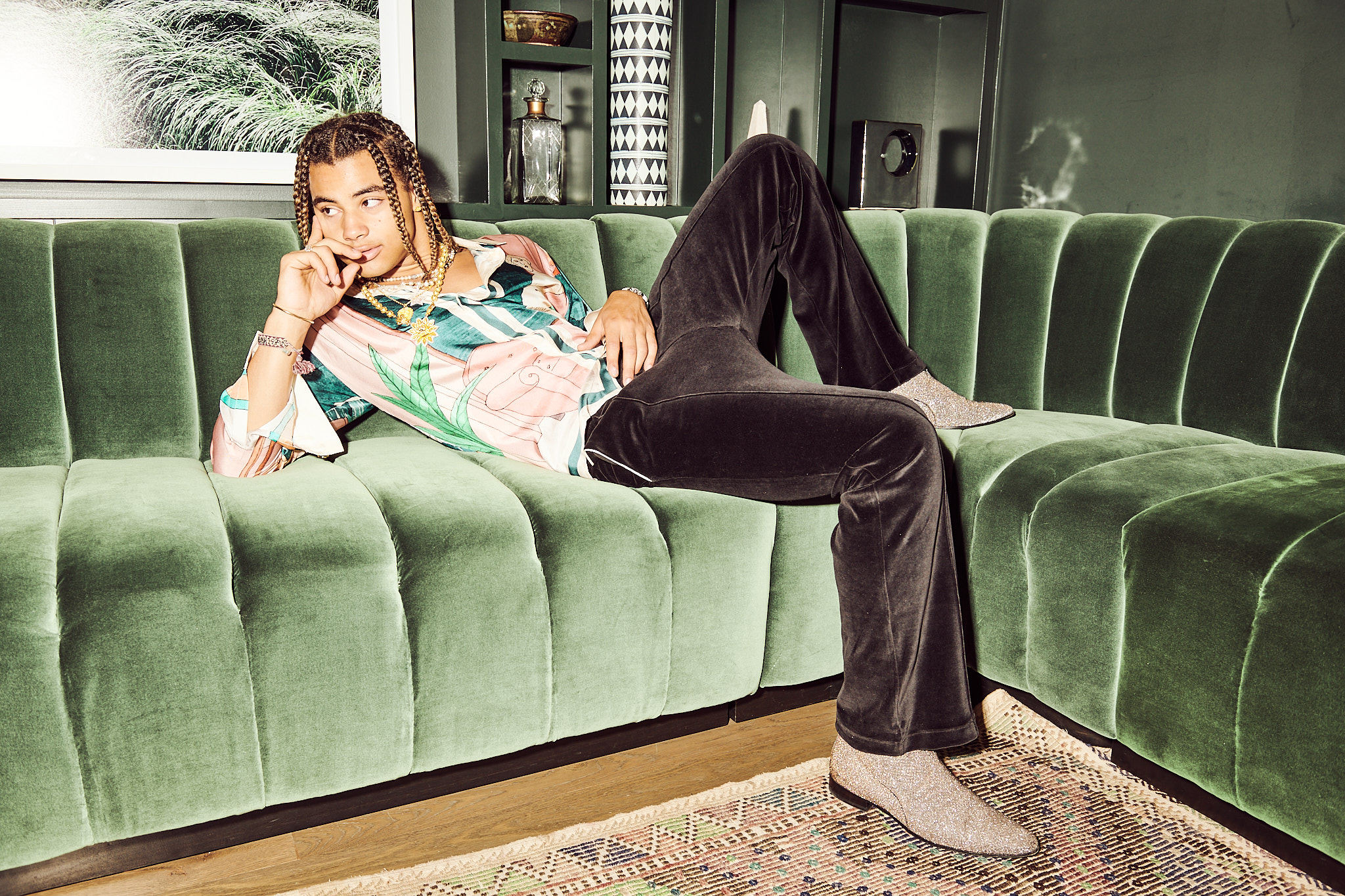 That attitude carries over to his creative process: building tracks up from vocal melodies rather than penning verses to already finished beats. “I make damn near everything from scratch with my producers, and most of the time, the songs will start outside the studio,” he notes. “I’ll have an inspiration for a melody or something, or some lyrics, and send a voice memo to my boy Omer.”

As Goldn’s latest single “Coco” featuring DaBaby and his debut album, El Dorado, in 2021, he and his producers are finding that the hit has helped them find a signature sound, putting guitars on songs more often than not. “When we were growing up, there was a lot of pop-punk and a lot of emo coming out there, so it’s just ingrained in my brain, that swag and that sauce,” he says. “I always put my own spin on everything.”

Having a huge breakthrough hit in 2020 is obviously a bit different than it would be in any other year — a fact 24kGoldn has made peace with.

“I don’t get to fully experience it, and I think it’s a good thing and a bad thing, y’know? I’d love to be on tour and performing and doing all those regular things that happen when you have a No. 1. But I just turned 20 a couple days ago, I’m still growing up. And having this period of downtime, this lull in the schedule, I’m still really, really busy,” he says. “But I get to kind of understand better what’s the effect of making the song that everybody loves.”