Once the saxophonist for jazz/hip-hop group Standing on the Corner, Bronx native Caleb Giles has quickly asserted himself as one of New York’s most intriguing young rappers. Orbiting and collaborating with members of New York’s sLUms collective (e.g., MIKE), Giles matches his peers in penning introspective and emotional, almost diaristic verses. On his 2019 album Under the Shade, Giles half-sung poignant hooks (“Roundtable”) and spit naturalistic 99% raps, lamenting overbearing bosses and whipping an unreliable bucket (“Gather”). You can hear him working through the growing pains of his 20s in real time, his resonant and assertive delivery belied by the uncertainty of his lyrics.

On Giles’s fourth album, Meditations (out this month), he’s deeper in thought, weighing the pain of the past (“Soil”) next to every new hug and handshake as he attempts to determine who and what’s genuine (“Passages”). “No Difference” is one of the standouts. A dismal piano-driven dirge with skittering trap percussion, Giles’s self-produced beat proves the perfect complement for a song that moves from premature burials to planting seeds in new soil (i.e., Giles moving ahead with his solo career). Haunted but confident, Giles delivers all with melodic cadences and croons that feel poignant with every husky syllable. He has never sounded better or more driven. Career-wise, uncertainty seems past tense. 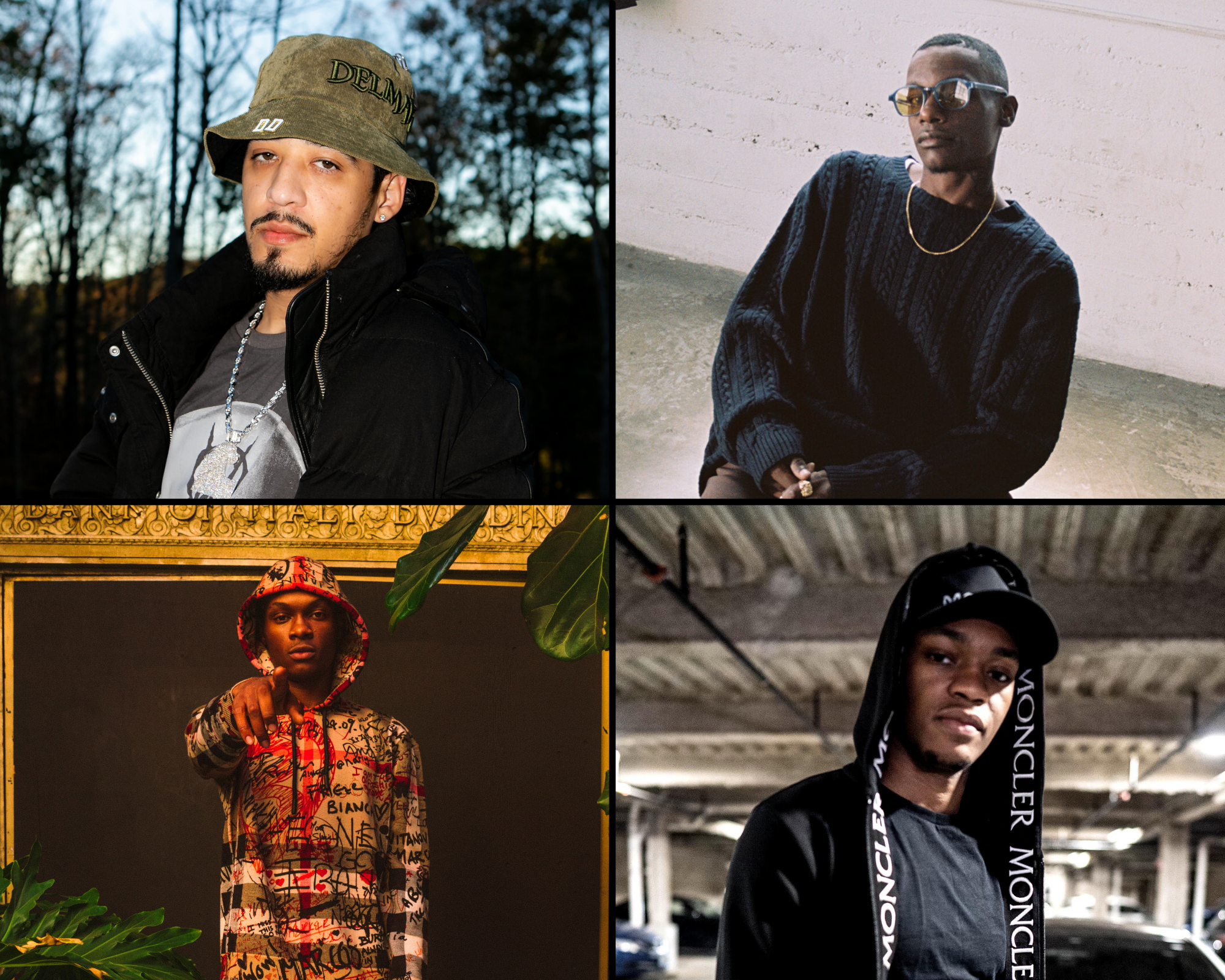 Undoubtedly raised on Three 6 Mafia, Deuce’s music bears greater allegiance to the grim crunk of Juicy J and DJ Paul than the gleeful, almost cartoonish aesthetic of Lil Jon & The Eastside Boyz. It’s ominous and aggressive, “Tear Da Club Up ’97”  music. He threatens the opposition and steals their women while rapping with the forceful bounce of Juicy & Co. and deftly moving between more contemporary cadences. Like Lil Jon before him, though, he delivers his signature ad-lib (“WHAT THE FUCK?!”) with the boom of the Kool-Aid Man crashing through drywall. It’s that balance that makes Deuce’s music both fun and menacing, the fun underscored by his sometimes intentionally silly dancing in his videos. You can hear it all on both installments of his Memphis Massacre series.

Signed to Quality Control (Migos, Lil Baby), Deuce briefly blew up last year with “Crunk Ain’t Dead.” He followed that up in early 2020 with a reverent remix featuring Juicy J, Lil Jon, and Project Pat. In the wake of Memphis Massacre 2, there’s “Duke Nukem Freestyle,” perhaps his most Memphis track yet. This is a horror-score influenced by the sound of Three 6 circa Mystic Stylez, the Carpenter-esque keys at once foreboding and somber as they land between skittering percussion. Throughout, Deuce flexes, glowers at his enemies, and expresses the paranoia that comes from knowing too many duplicitous people with homicide on their minds. It’s less crunk, more rap for those who know death too well.

Eric B. & Rakim. Dre and Snoop. Alchemist and [insert rapper, really]. The rapper-producer duo is a platonic rap ideal. When there’s an intuitive understanding between two individuals in the studio, there exists irreplicable alchemy. Beats inform and transform rhymes and vice versa. South Floridians Kent Loon and Chester Watson understand one another and the power of their bond. While Watson has become a critically-acclaimed rapper/producer, Loon has gradually improved his writing and polished his delivery with the aid of Watson’s beats. Watson’s dark, lysergic suites complement Loon’s benumbed cadences and low but resonant voice. With every Watson-produced loosie and single, Loon gets closer to perfecting his quasi-psychedelic trap, lines about ill-gotten racks and mind-expanding substances somehow becoming sharper as his world melts.

Endless Night is Loon’s latest EP. Produced by Watson, it’s the purest distillation of their synergy and Loon’s best offering yet. The newest single, “Visions,” also finds him holding his own while rapping alongside Watson. Backed by an eerie, atmospheric beat that sounds like midnight in an abandoned house, Loon raps in a sinister tone about stacking money in a drought. He’s more assured but also more ruthless. Maybe Watson pushed him there, maybe the drugs, or maybe the world. Probably all three.

Finding your sound can take as much time as refining it. Los Angeles’s Kruk One began his career as a ‘90s rap nostalgist, making East Coast-leaning boom-bap (see 2016’s “Return of the Illness” or 2018’s “Dip Slide”) that rivaled anything from the Pro Era. On tracks like 2019’s “Get On,” he switched to the sound of his home turf. Today, he raps over beats that bridge the gap between sunny g-funk and the dark, post-Mustard bounce of contemporary L.A. street rap.  Still, his delivery harkens back to the ‘90s, as he raps with bravado, polish, and forceful enunciation. Like Pomona’s CNG, Kruk One is a good kid in a… you know the rest. He isn’t affiliated or sliding on enemies with a draco. Dominant tropes include hometown pride, overcoming adversity, and outrapping the opposition. If you find L.A. rap is more focused on internecine wars than the craft, Kruk One is for you.

“Like That” is the latest single from his recently released album Reckless. This is Kruk One at his hardest. Here he approaches the tropes of his peers, touting his “army full of riders” before admonishing haters and reminding you that the beat slaps. He also gets an excellent assist from Long Beach’s foremost Cambodian Crip, $tupid Young. Though “Like That” is good and Kruk One is talented, his collaboration with Young and the topical shift begs a few questions. How does he want his audience to view him? Is he still finding his sound? Only time will tell.

The number of prominent white female rappers pales (I know) in comparison to their male counterparts. Being white while making Black music, in addition to being women in a male-dominated genre, leaves them open to scrutiny both understandable (the former) and unwarranted (the latter). That said, white female rappers do share the privilege of their male counterparts. Historically, those who break through generally receive wider coverage much faster than Black women. It’s curious then outlets that covered Kreayshawn circa “Gucci Gucci” and Iggy Azalea between “Pu$$y” and the DJ Mustard-jacking “Fancy” haven’t said anything about Tay Money.

A native of Athens, Texas—a town not far from Dallas—Tay Money has quickly and quietly become one of the biggest women rappers in Texas. With a thick southern accent and a slight lisp, she confidently delivers catchy hooks and simple yet deftly rapped verses about stacking money, hitting the club, and outshining anyone in the comments. These are sex-positive turn-up anthems for “GRLS WKND,” songs of self-validation primed for twerking. See her breakout single “Bussin,” which has tens of millions of plays on streaming services or the sequel, “Bussin 2.0,” featuring Saweetie. The Bratz doll energy is strong with Rico Nasty and Flo Milli, and that’s also true of Tay Money. Her way or get out of the way. You could say she’s a southern Kreayshawn sans co-writers or industry co-signs, but she has more talent and more in common with Houston’s Megan Thee Stallion. Outwardly, Tay Money also seems to revere her Texas rap predecessors (see her homage to Dallas legend Big Tuck, “Da Realest”). Her respect for the culture, if nothing else, augurs well.

“Circus” isn’t the latest Tay Money single (see the Mulatto-assisted “Brat”), but it’s one of her best songs yet, a distillation of all that might propel her to headlining shows post-pandemic. The beat, like most she chooses, strikes a balance between bouncy and aggressive. It’s the same feeling that makes J-Kwon’s “Tipsy” work forever. The line between hook and verses is thin, but that seems intentional, a testament to how effortlessly she can ride a beat. Lyrically, “Circus” is a reintroduction for anyone who’s missed the show thus far. She’s stacking money as tall as Lil Uzi Vert—perhaps a light flex given Vert’s size—and dancing while dissing other rappers: “We be in the club, we be dancin’ we be twerkin’ / Heard you switched your style, glad you did, it wasn’t workin.” Tay Money isn’t going to change anytime soon, but I imagine the level of coverage will.