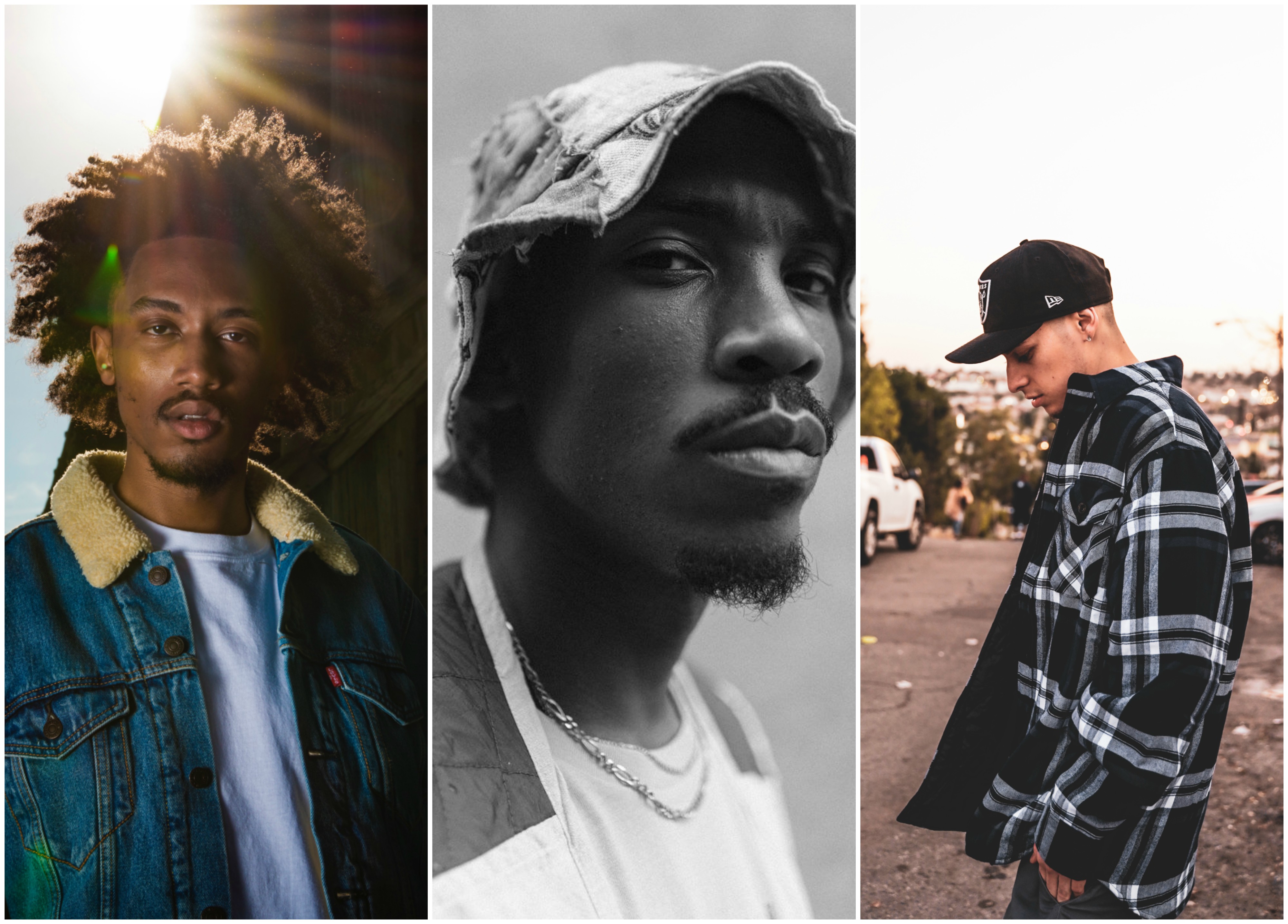 Texas isn’t synonymous with capital-P Political rap, but neither is it a monolith of glinting, candy-painted slabs and syrup-filled double cups. The Geto Boys and UGK, E.S.G. and Fat Pat—countless artists have chronicled Black life in Texas neighborhoods, lives that are politicized and affected by racist redlining, policing, and judicial systems. If you need off-record evidence, Scarface ran for Houston City Council and Bun B covered the 2016 election. That said, does Texas have a Chuck D or Killer Mike? Dallas-native Bobby Sessions might be the answer to that question.

Sessions signed to Def Jam in 2018 following his first two projects: 2015’s LOA (Law of Attraction) and 2017’s Grateful. Since signing with the major label, he’s released three-parts of his RVLTN series. Sociopolitically-minded without feeling overly preachy, Sessions raps more like he’s passionately musing on the couch with like-minded friends than yelling from the soapbox. He believes in his words but also seems to be actively working out his beliefs, recalibrating in real-time. While his varied delivery and penchant for wordplay are unique to him, his music’s mood and politics sit somewhere between J. Cole and Nipsey Hussle, the everyman musings of the former meeting the business-minded grind of the latter.

This month’s RVLTN (Chapter 3): The Price of Freedom is primarily concerned with Sessions’ view on the economic aspects of Black revolution. For him, this is synonymous with building and investing in Black-owned businesses, saving money, and forgoing the college-to-career path (“Real World”). These are approachable screeds for the Roc Nation brunch crowd. Dismantling capitalism isn’t on the menu, but it might be in the future.

“Reparations” is one of the standouts from The Price of Freedom, a track that sonically nods to his Texas lineage while muddying Sessions’ message. The slowed, sometimes chopped hook is a tip of the hat to DJ Screw and an interpolation of a line from Pimp C’s “Big Pimpin’” verse: “I just wanna ball / Wanna hit the mall / I just wanna get everything that I’m owed.” Throughout, the hook and the verses are at odds, as Sessions is caught between the desire for material goods and advocating for long-term investments to account for reparations that will likely never come. He doesn’t yet have the bravado of Chuck D or Killer Mike’s erudition, but Sessions is getting there one chapter at a time.

It’s difficult to make positive street rap that doesn’t sound like an after-school special — earnest music that advocates for choices antithetical to those associated with the genre. For evidence, see those who’ve jumped at the chance to bang on wax without ever getting jumped in. Pomona’s CNG, who you might’ve seen on the first season of Netflix’s Rhythm + Flow, remains honest about his past and succeeds more often than not.

CNG (which stands for Comes N Goes) likely grew up listening to Suga Free, but he pushes a different street gospel. He espouses positivity over gang activity and would probably never slap the shit out of anyone if he could avoid it. While he understands the impetus for joining a gang, he pushes for listeners to (like him) choose another route. You can hear it at all on the front half of his 2019 debut album Detour (the back half is tepid, R&B leaning tracks). It’s staunchly West Coast music, the instrumentals primed for those who pair Dickies and Pro Clubs while listening to Zapp. Throughout, CNG narrates the days he was a hip-hop obsessed graf-writer living in various hoods, trying to evade gang life and find a way out.

“Lost Soldier” is CNG’s best song to date and encompasses all of the above. Released in July, the single has racked up over 500,000 views on Youtube. With a hook from Ronnie Spencer — the Nate Dogg of Texas rap who sounds like an Isley Brother (see UGK’s “One Day”) — it feels like a lost track from the ‘90s. CNG traces the arc of a gang-life-goes-awry narrative from inception to set-driven drive-by in simple but vivid prose. It’s not CNG’s story, but it feels like it could’ve been. The specificity of the lyrics — a deported father, fights with mom, the chains around the neck — makes the fiction feel real. Narrative songwriting of this caliber and emotional impact is in short supply.

The murder rate in Jacksonville, Florida increased 17% in 2019, bringing the number of deceased (131 people) to a 20-year-high. Sadly, nothing has changed in 2020. As of August, there have been another 100 homicides in the city. None of this is news to Jacksonville native Foolio, who knows nothing has changed for over two decades. The 22-year-old rapper survived gunshots in his teens and has lost over a dozen friends to gun violence.

Foolio’s music — as goes the cliche that shouldn’t be one in the first place — reflects his environment. Since 2015, he’s been penning wartorn memoirs and frontline reportage about cyclical and generational gun violence. Promises of retaliation bleed into grief impervious to all narcotics. It’s more emotional than the dead-eyed fatalism of someone like 21 Savage. What would you do if someone gunned down your brother if you knew your life depended on ending another? Foolio wants to know.

Over the last two years, Foolio has become a better writer and more polished in his delivery, releasing increasingly auspicious projects, like 2018’s Zaytoven collaboration 6Toven. (In another timeline where Kodak Black doesn’t cast a shadow over all of Florida rap, 6Toven’s “Uh Oh” might’ve been a hit.) On this year’s Top Conniver, Foolio sometimes croons verses and hooks, sounding a bit like Kevin Gates on “Here to Stay” and Drake (an admitted influence) on songs like “Sorry.” Foolio’s also proven capable of dipping into emo-rap (“Play with Me”). But his latest single, “Fastlife,” displays some of his greatest strengths. Foolio raps with urgency and energy over lugubrious keys and skittering percussion, his lyrics packed with similes that connect for their simplicity (“All my friends dead like Benjamin Frank”). Here, as he does in many other songs, Foolio laments the loss of his friends. The question Foolio asks near the middle of the track, though, is the most powerful, illustrative of his life and catalog: “Why these rap n—– get famous then try to come back to the trenches?” Clearly, he thinks, they must’ve never lived anywhere like Jacksonville.

The younger and quicker an artist reaches the charts or racks up awards, the more effusive and widespread the praise. Maryland’s Uno Hype knows all too well. He’s been releasing music under that name since at least 2012’s Fxck The Hype, which featured then-rising rappers Joey Bada$$ and Smoke DZA. Recently, Hype has wiped most of his catalog from the last seven years or so from the Internet. It’s not a rebrand so much as it is a wiping of the slate.

Hype hit restart with last year’s “Untitled.” A discursive but impassioned biographical snapshot that jumps from cold nights spent on couches in Montgomery County, Maryland to his steady, family-supported rise. He followed it up with the motivational “Elevate” and “Pot of Gold.” The trio of singles displayed his ear for moving modern production that pulls from jazz and soul. More importantly, they affirmed that all of the years he’d been rapping hadn’t been for naught. Hype raps with assurance and captivating fluidity lacking in greener artists. He also has a better sense of song structure, understands the necessity of a simple and emotional hook.

He has spent 2020 releasing more singles to varying success (see “Kill Your Idols” and “Tuesday”). “Color Me” is Hype’s latest single to take off. Here, he articulates the systemic injustices facing Black Americans while denouncing news stations that paint them in unflattering and unjust lights every day. The hook hits you in the gut, poetically outlining the disproportionate reactions to the fires around the country and the plight of Black people: “It’s a fire in the hills, ashes on my soul / They gon watch it burn, they gon watch it burn slow.” If Hype had blown up years ago, maybe he wouldn’t be making these songs today. Sometimes, the slow burn is better.

Quin NFN is a chameleon. The Austin, Texas rapper adopts various styles at will. There have been times where he sounded like a hyper DaBaby (“Talkin My Shit”), other times where he seems to be cribbing melodic phrases and runs from Young Thug (“Out My Body,” “Broadday”). On his March album QUINCHO, he occasionally absorbed the energy and cadences of NLE Choppa (“Say No Mo”). NFN dropped “Detroit Flow” in July, which found him adopting the city’s one-step-behind-the-beat flow over a characteristically dismal and piano-heavy beat. Ultimately, NFN is as versatile as he is polished. Few can move between all the styles mentioned above without one of them feeling forced. With NFN, they never do. For me, though, the question has always been: What does NFN sound like?

Last month’s “Nothing to Me” might be the answer. The tropes — stacking money, cavorting with dimes, toting various firearms — remain the same as the rest of his catalog and aren’t novel in and of themselves. But NFN bounces around the beat with a cadence that’s at once smooth and slightly choppy. Here, it doesn’t smack of anyone else. An admitted Lil Wayne fan, he also continues to string together simple but effective punchlines: “Rubbin’ the runts and the yo and the sticky, think I’m a ho, get smoked like Phillie / Standin’ on 10k so a n—- won’t get me, choppa a model, it came with some titties.” When NFN drops his next project, it will be interesting to hear if he finally sounds like himself.