"I had no filter with what I was writing about. I just kind of vomited out what I thought and everything in my head..." 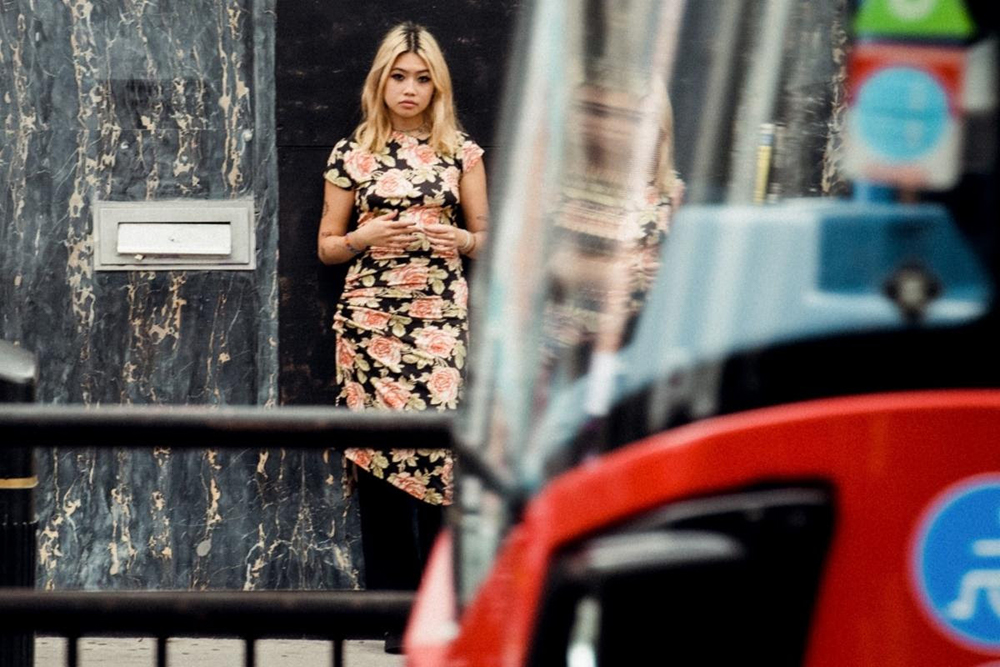 Fake It Flowers, Bea Kristi’s debut LP as Beabadoobee, is the series of honest conversations she’s always wanted to have — drawing on childhood memories, new and old relationships and finding confidence in her 20-year-old self.

The singer-songwriter emigrated with her parents from Iloilo City, Philippines to Camden in North London at age three. While she settled into her U.K. home, Kristi admits to SPIN that she was “embarrassed of how I looked and embarrassed about the lunch my dad used to pack me — rice and adobo or sinigang,” two popular Filipino dishes.

And the desire to connect to her identity flowed into her first encounters with music. “I remember just being like, ‘Why is there no one who looks like me onstage?’” she says. “I had no one to kind of look up to, and it was strange.”

She eventually discovered Lush singer-guitarist Miki Berenyi, who not only inspired her to dye her hair red but also demonstrated how Asian female musicians can thrive in the spotlight. Now she’s humbled to be that same example for others.

“One time, this Filipino girl came up to me and was like, ‘You encouraged me to pick up a guitar,” she recalls. “And it’s like, ‘This is the reason why I do it.’ I do this for myself to help my brain. But to even think I’m inspiring people, that I’m giving that representation, is amazing.”

Kristi’s fight for inclusion continues with hopes of getting “more chicks onstage.” She gushes about her respect for artists like Clairo, Snail Mail, Soccer Mommy (whose singles project Kristi contributed to over the summer) and Dirty Hit labelmates BLACKSTARKIDS and Vanilla Jenner.

“It’s amazing to see my girls onstage,” she says. “Girls should stick up for each other. Girls should have each other’s backs, not bring each other down. And I think that’s why I love the women in the music industry — we just constantly encourage each other.“

Kristi recorded Fake It Flowers to reassure girls that it’s OK “to be loud, annoying and even a whiny bitch sometimes.” It’s exactly the record that she wanted to listen to when she was a teenager.

“The whole idea behind the album is something I was everything I’m supposed to tell someone but couldn’t,” she says. “The songs are all quite personal, very honest. I feel like I’ve practically worn my heart on my sleeve for this record and had no filter with what I was writing about. I just kind of vomited out everything in my head.”

Lead single “Care” exemplifies her conversational lyrics, describing a time when she continued to grapple with childhood wounds. She dives deeper into that vulnerability on the ballad “Emo Song.”

“I remember doing therapy again after kind of having a break from it and realizing a lot about myself and why I react to certain situations, how things from childhood had affected me as a young woman and how it’s affected how I am,” she says. “And ‘Emo Song’ really touches on that — it talks about the things one can do to distract themselves during bad situations, why they do it and why I do it. And I thought writing it so honestly would help me get over it.”

Fittingly, the album’s target audience is Kristi’s younger self.

“I wrote this album for the 15-year-old me to listen to when she’s sad,” she says. “I do this thing — I tell everyone: I dance in front of the mirror every night when I feel like shit. I put on ‘Eight Arms to Hold You’ by Veruca Salt, and I just dance. I don’t even know how to dance. But my dream is that Fake It Flowers, is that record for someone — for a girl, for anyone.”

Beabadoobee Shares ‘How Was Your Day?’ Video

Beabadoobee Shares New Single ‘Worth It’