After weeks of discussions over the future of TikTok in the United States, the Trump Administration has announced it will be banning the social media platform as well as messaging app WeChat from mobile app stores starting as early as Sunday (Sept. 20).

The unprecedented ban is to “Protect the National Security of the United States” from the Chinese-owned company, according to a  statement from the U.S. Department of Commerce. It goes on to say that “At the President’s direction, we have taken significant action to combat China’s malicious collection of American citizens’ personal data, while promoting our national values, democratic rules-based norms, and aggressive enforcement of U.S. laws and regulations.”

While Trump plans to boot WeChat from app stores on Sept. 20, TikTok will be available until Nov. 12, the Washington Post reported. This will give the app’s parent company, Bytedance, time to figure out the details of the possible deal it made with American-based company, Oracle.

Aside from teaching users the latest dances and sharing educational information, TikTok has been one of the premier platforms for music discovery and has helped artists like Lil Nas X, Doja Cat and BENEE turn their otherwise unknown tracks into chart-topping hits. A number of artists have showcased their dance moves there as well. 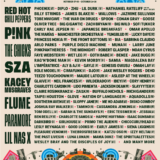 Soon after the White House’s announcement, TikTok responded with the following statement:

“We disagree with the decision from the Commerce Department, and are disappointed that it stands to block new app downloads from Sunday and ban use of the TikTok app in the US from November 12. Our community of 100 million US users love TikTok because it’s a home for entertainment, self-expression, and connection, and we’re committed to protecting their privacy and safety as we continue working to bring joy to families and meaningful careers to those who create on our platform.

In our proposal to the US Administration, we’ve already committed to unprecedented levels of additional transparency and accountability well beyond what other apps are willing to do, including third-party audits, verification of code security, and US government oversight of US data security. Further, an American technology provider would be responsible for maintaining and operating the TikTok network in the US, which would include all services and data serving US consumers. We will continue to challenge the unjust executive order, which was enacted without due process and threatens to deprive the American people and small businesses across the US of a significant platform for both a voice and livelihoods.”

We agree that this type of ban would be bad for the industry. We invite Facebook and Instagram to publicly join our challenge and support our litigation. This is a moment to put aside our competition and focus on core principles like freedom of expression and due process of law.

The ACLU has also come out with a statement saying that the ban on both Chinese mobile apps violates the U.S. Constitution’s First Amendment.

“This order issued today violates the First Amendment rights of people in the United States by restricting their ability to communicate and conduct important transactions on TikTok and WeChat,” the organization posted on Twitter. “The order also harms the privacy and security of millions of existing TikTok and WeChat users in the United States by blocking software updates, which can fix vulnerabilities and make the apps more secure.”

The story is still developing, and we will update as more details arise.