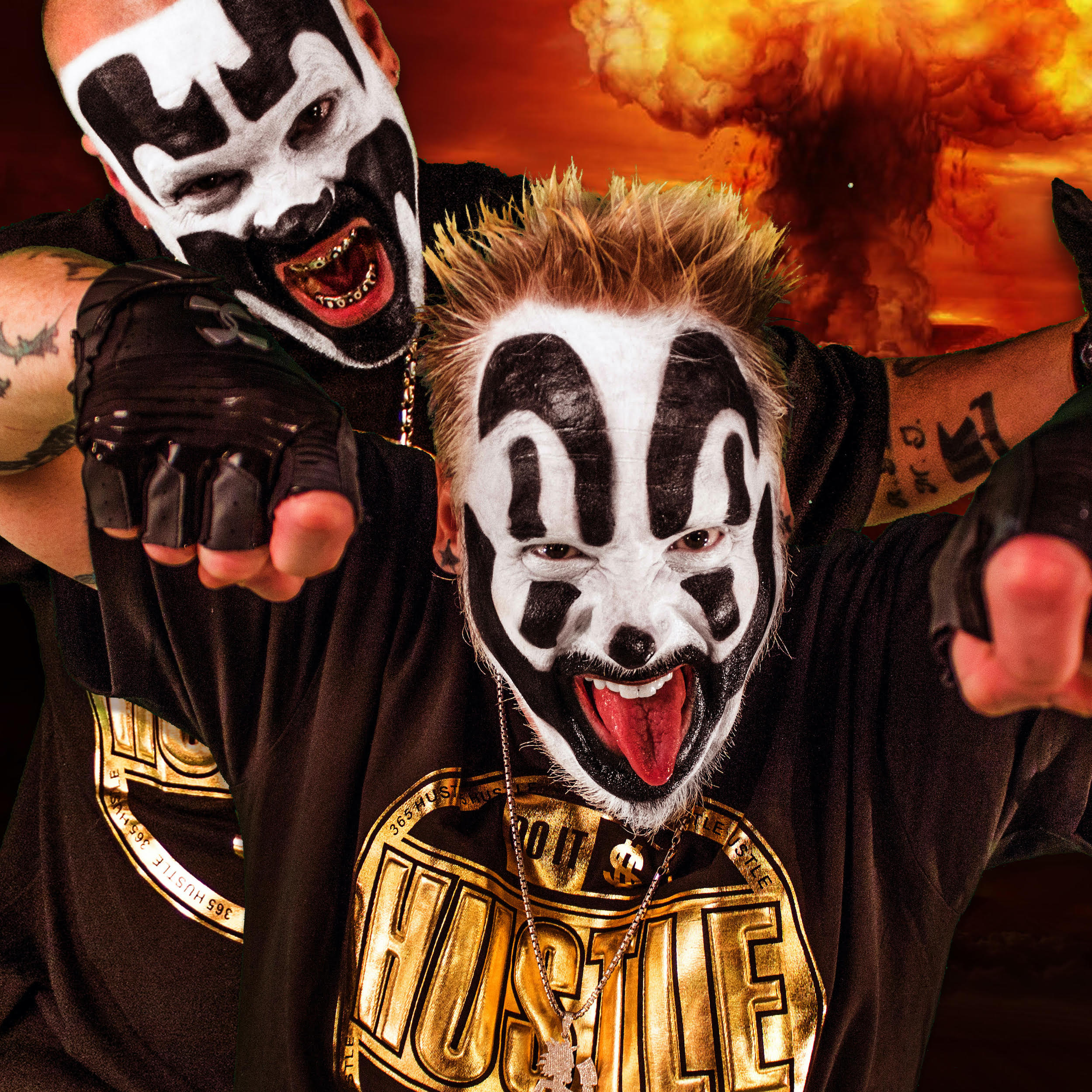 In 2013, I was working as ICP’s publicist. We were out in L.A. doing a press tour to promote their Fuse TV show, Insane Clown Posse Theater. It was me, Shaggy, Violent J, and their assistant Chop. We had just arrived at our hotel in Beverly Hills, and J decided to adjourn to his hotel room instead of joining us for dinner. So I got him a salad and an order of boneless chicken wings from a diner down the road. I arrived at his door with the vittles and knocked. No answer. I knocked again. Louder. Still no answer, but I heard a mumbling sound behind the door. Seconds went by. Still nothing. I banged on the door. Hard. The door opened just a crack.

“Leave it outside the door! I’m NAAAAAKEEEEEEEED!” Violent J’s voice bellowed down the hallway of the posh Beverly Hills Sofitel hotel, making at least one fellow guest open their door to assess the commotion. I left the food at the doorway and scuttled away. No one said working in rock and roll was glamorous.

Years later, I still keep tabs on Violent J and Shaggy 2 Dope. You never know what the Wicked Clowns have percolating inside the tent of the Dark Carnival. And even though this year has royally sucked for most everyone, it turns out ICP were ahead of the curve. Not only were plans for the 21st Gathering of the Juggalos shuttered before many other festivals announced their cancellation, but the long-awaited Wicked Clowns from Outer Space 2 tour was also postponed due to COVID. A funny thing happened — in a world gone wild, suddenly ICP looked like one of the most forward-thinking groups in the business. Positive memes and commentary appeared across the Internet, some articles even calling ICP “woke.” They did an interview earlier this year where they acknowledged that some of their older lyrics are problematic due to gay slurs. They even became unlikely fashionable this summer when one of their old ICP shirts — which shows a clown burning and ripping a Confederate flag under the words “Fuck Your Rebel Flag!” — became a bestseller amidst the so-called “controversy” of taking down outdated Southern monuments.

We meet up in Violent J’s home studio, located way out in the outskirts of Metro Detroit, where J is sitting with Ryan Gibson, better known as Str8jaket, Psychopathic Records’ in-house producer. Together they’re working on a song from the upcoming fifth Joker’s Card of the Second Deck. (Most ICP albums revolve around characters like “The Ringmaster” and “Fearless Fred Fury” and are referred to as “Joker’s Cards.” And, no, Juggalos, I did not find out the name of the Joker’s Card. Sorry. I did try, though.)

I can attest by the small sampling that I got in the studio that day that the upcoming Joker’s Card features that deep Dark Carnival wicked shit funk that inspired generations of Juggalos to paint their faces, throw or otherwise enjoy Faygo and, most importantly, look out for one another. We adjourn to Violent J’s den, which is packed with wrestling memorabilia — a man-cave befitting an artist who spent his youth trying to meet wrestlers at the stadiums in Detroit.

That’s a question I get all the time from Juggalos and non-Juggalos alike. Honestly, ICP have always reminded me of the Pet Shop Boys, with the louder, brasher Violent J as the Neil Tennant and the quick-witted, amiable Shaggy as the Chris Lowe. Together they’ve made lots of money – especially in the ‘90s. But that was then, this is now. And the Clowns are far from a retro act.

“I remember talking to Joey at the studio, and we were like ‘Do we just want to do nostalgia? Do we just wanna be doing ‘Chicken Huntin’?” says Violent J. “Or do we still want to continue to kick ass as if we’re out here competing with today’s music? We’re still hungry.”

Before the pandemic, ICP had some of their most ambitious ideas since their ‘90s heyday. They planned a series of one-night-only concerts all over the world where you collected a coin at each show. Those who collected every coin would get a photo ID card granting them status as an “ultra-live monster Juggalo,” which gets the cardholder a lifetime discount on merchandise and early access into ICP shows. And before COVID-19 made artists playing at-home shows via livestream a common occurrence, ICP the idea of selling tickets to a full-fledged Insane Clown Posse concert — Faygo included — inside Violent J’s living room. (An amended, pandemic-altered version is still happening in October as a backyard bonfire at Violent J’s house called ICP’s Wicked Campfire Stories, along with a series of livestreams dubbed ICP’s House Party Peep Show.)

“We were going to perform in my living room, dog!” roars J, still angry about the fucking pandemic. “Now that don’t sound like shit right now, but imagine before the pandemic ICP doing a real concert with staging, lights, sound, everything from my living room. Streaming!”

Shaggy’s kind of like Silent Bob. He doesn’t talk as much, but when he does, he makes it count.

“We know a lot of people had plans and got shut down by the pandemic. Does it suck? Yeah, fuck yeah, it sucks,” says Shaggy. “But at the same time, it made us do more thinking outside the box. I mean, let’s not front. This pandemic ain’t going anywhere for a minute. So we’re trying to do what it is we do in an inventive way. Pandemic-style.”

In addition to working on the upcoming Joker’s Card, the duo have been staying busy filming personalized messages on their Custom Clown Clips service, doing everything from marriage proposals to birthday greetings. But they often get requests that run much deeper. Take, for example, Aaron, who went to the Gathering of the Juggalos a few years back and had a great time. It becomes a bit more poignant when you learn Aaron is paralyzed from the neck down and living with a terminal brain tumor.

“I’m not a social worker. I don’t know what the fuck to say half the time. I paced in my kitchen for three hours [thinking about what to say to Aaron],” says Violent J. “Dog, what do you say to cheer someone up who’s paralyzed from the neck down and living with a brain tumor? All day long we do meet-and-greets with Juggalos who always say the same thing: ‘It’s my dream to go to the Gathering.’ And then you have Aaron, who wanted to go to the Gathering in 2017, who is immobilized from the neck down, who still went. That man could give a seminar about how to live life.”

The new Joker’s Card is the latest album in the Clown’s ongoing Dark Carnival mythos. ICP’s erstwhile producer Mike E. Clark, who basically pioneered ICP’s horrorcore sound back in the ‘90s, has a few vintage-sounding beats on the album. Longtime Juggalo producers like Mike Puwal, Str8jaket, Kuma and the Florida-based Devereaux also make appearances on the as-yet-incomplete LP. They also just did a few tracks with Alien Ant Farm, which apparently turned out well. “I think this Joker’s Card is the coolest in maybe 15 years,” says Violent J. “This is my number two favorite Joker’s Card of all time — the appearance, the character, the sound, how it’s going to be presented. Nobody’s gonna see it coming.”

Though they’re looking ahead to life after the “new normal” of the pandemic, 2020 is a year of 20th anniversaries for the duo. Two decades ago, Psychopathic Records presented the first-ever Gathering of the Juggalos in Novi, Michigan, and released the double album Bizaar/Bizzar. But most infamously, it’s the two-decade mark of their well-reported beef with Eminem. An ICP associate got into an altercation with the freshly famous Marshall Mathers near Detroit. Respective diss tracks ensued, but the beef was squashed when the late Proof invited the Psychopathic Records team out to a friendly bowling match of ICP vs. D12. (For the record, D12 won.)

Violent J remains unapologetic about what went down with Slim Shady, but he says he’s “glad no one got hurt.”

“I don’t regret it because it was hip-hop history in [Detroit],” he says. “But it meant so much to us when Proof squashed the beef. He came to the office, laid down a verse for [Twiztid] and gave us a shout-out. It was dope. We didn’t ask him, ‘Does Eminem know you’re here?’ because it didn’t matter. Proof coming down was enough.”

They skipped Proof’s funeral even though they wanted to go because they didn’t want to take a chance on upsetting Eminem, who had just lost his best friend. Years later, Em name-checked ICP on The Marshall Mathers LP 2. (“What a fucking honor!” exclaims Violent J.)

Would they ever invite Eminem to play the Gathering?

“Oh, man. I’d invite Eminem to come have dinner at my house. But he’s selling out stadiums all over the world — he doesn’t really need the Gathering,” Violent J says. “But we’d love to do a song with him. That’d be dope.”

So the Clowns are alright. They’re still Violent J and Shaggy 2 Dope, just a little bit older and a lot wiser than they were when they were angry young men starting out with this wicked shit.

“The trick is after 30 years in the game, the people who watch us in this industry are saying ‘Man, they’re still doing it with this shit,’” says Violent J. “’They’re still doing things nobody else is doing.'”