Dave Chappelle has been spending the summer performing small, socially distanced gigs near his hometown of Dayton, Ohio as part of a series called Dave Chappelle & Friends: An Intimate Socially Distanced Affair. The shows spawned a new Netflix special called 8:46, and have seen a list of A-list artists come out of quarantine to share a stage with the comedian. Erykah Badu, Common, Michael Che, Tiffany Haddish, DJ Trauma, Michelle Wolf, Donnell Rawlings, Talib Kweli, Cipha Sounds, Questlove, Jon Hamm, Mo Amer, and Issa Ali all showed up for Chappelle’s 4th of July celebration, and earlier this week he had another big (albeit tarnished) name as the “special guest” of his latest gig: Louis C.K.

Photographer Matthieu Bitton shared a photo on Instagram of Chappelle, C.K, Wolf, Amer, and DJ Trauma. “Tonight’s surprise guest in the cornfield: Louis CK,” he captioned the post. Trauma also shared the photo, expressing that the controversial comedian “came thru and rocked with us!!!”

C.K. has been mounting a comeback since he admitted to sexual misconduct in 2017. He began performing again less than a year later, launched a tour in 2019, and self-released a special called Sincerely C.K. in April; however, this was his biggest outing since the allegations surfaced. 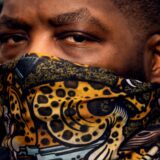