When was the last time you tapped into a state of flow? It’s magical being swept up in the moment, a hypnotic trance where your nerves light an electric fire and the spirit of creation speaks through you. You’ve gotta bottle it like lightning, which for Disclosure, means writing 200 songs and whittling them down to 11 that are released today (Aug. 28) as the duo’s third album Energy.

“That was the plan from the start, write a shitload of music and pick the absolute cream of the crop,” Guy Lawrence tells SPIN. “By cream of the crop I mean, the ones that were the most enjoyable to make; the easiest to make, where there wasn’t 20 versions of the same song. That’s what we’re referring to with this Energy idea. They are uplifting, big, positive, happy tunes … but the energy we’re talking about is that between collaborator and us; between the music and your brain. You don’t get songs that come around like that every day … that only happens for us, well, one in every 20 tunes, I guess.”

Guy, 29, and his 26-year-old brother Howard broke through the dance scene seven years ago with their seminal debut Settle. The grooveable dance-pop LP was nominated for a Grammy and led the UK house and garage revival. Hit single “Latch” helped launch singer Sam Smith to international stardom. When their sophomore album, Caracal, dropped in 2015, Disclosure became A-list producers working alongside stars like the Weeknd, Lorde, Miguel, a Smith reunion and more.

When the Caracal tour ended in 2016, the Lawrence brothers took a deserved break. 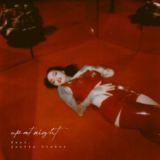 Kehlani Teams With Justin Bieber for ‘Up at Night’

“We kind of burned ourselves out,” Howard says. “I was touring since school, so I didn’t really ever have a chance to grow up. I was in this time capsule. We just took some time to ourselves, [and] in very different ways. Guy went traveling all around Southeast Asia with his girlfriend. I did like the exact opposite, got a house in the countryside, read a lot of books and planted loads of trees.”

Disclosure couldn’t resist the call of the studio for long. Around October 2017, they flew to L.A. and got with R&B songstresses, Kehlani and Syd. A few hours later they had “Birthday.” The silky slow jam hit a dreamy melody against scratched vinyl pops and crackles. It breathed fresh style into the brothers’ signature sound and set forth a deluge of inspirational experiments.

All the songs that comprise Energy were recorded on-site in L.A. That’s how Disclosure prefers to work, in the room with the collaborator of the day, writing the beat and lyrics from scratch in a single session. They don’t get starstruck much, but writing “Reverie” with Common was an exception.

“He’s for sure one of our favorite hip-hop artists of all time,” Howard says. “We probably found Common via J. Dilla because we had such a J. Dilla phase, I mean, we’re still in it … we would have flown to L.A. just to meet Common and talk to him, that would have been worth it. To actually sit down, make a beat in front of him and then write lyrics with him. That was like a dream come true. He said I had dope bars.”

“Imagine that,” Guy says. “Howard from Reigate has dope bars.”

Writing with Cameroonian M.C. Blick Bassy was another standout experience. Their collab “Ce N’est Pas” perfectly captures the essence of the Energy concept.

“He speaks like four different languages from Cameroon,” Guy says. “He told us there’s hundreds of languages in Cameroon, [and he sings] a bit of French and a mashup of loads of them. He just makes the sounds of multiple different languages with elements of scat as well. The meaning’s less important than the texture and the tone, which is music to my ears because I’m not really a lyrics guy. Howard and whoever we’re working with are more interested in the concept. I’m much more interested in the beats and the mix; that kind of thing.

“It was a jam-based day, which is something we’ve needed to get back to it for a while,” he continues. “Me on my drum machine, Howard on the bass and [Bassy] singing. That was a one-take song … We’re all just weaving and flowing in and out, and that’s what making music should be about. That’s what it used to be about for us when we were kids playing in our bedrooms, just jamming with our parents and stuff like that. it’s good to get back to that.”

“My High” with slowthai and Aminé came around in a similar way, as did “Who Knew?” with Mick Jenkins. Howard tapped into his love of jazz harmony and melodies, while Guy took care to infuse each track with acid edge and lo-fi fuzz, what the producer calls “distorted imperfections.”

Where “When A Fire Starts To Burn” revolves around a snippert, “Energy” gives Thomas’ sermon more room to breathe. “If you are alive / I know you ain’t reach your best yet,” he booms. “Now we gon’ take it to another level / Right now / You should feel invincible, Powerful, Strong.”

Energy is that next level. It’s a look into a positive future, one that the brothers hope fans can find some joy in while stuck inside. It was fun to make, after all, which is what music should be. They’re sharing that process on Twitch, every Tuesday and Thursday.

“We’ll make a song live in front of everyone,” Howard says, “then we’ll delve back into our back catalog and show ‘Latch’ or ‘F For U.’ We’ll show you exactly how we made them, play the parts. It’s been super fun, something really cool to do in lockdown.”

“That’s how all of our most popular songs have come around,” Guy says. “I can’t think of any that have been a million versions where you look back and go, ‘God, that was a nightmare.’ With ‘Latch’ or even with ‘Talk’ with Khalid, other songs outside of Disclosure that we’ve made, they’ve all just been this beautiful little moment in time. It’s the most eclectic and most pumping album we’ve made. So if that sounds interesting to you, put it on – but with the good headphones.”