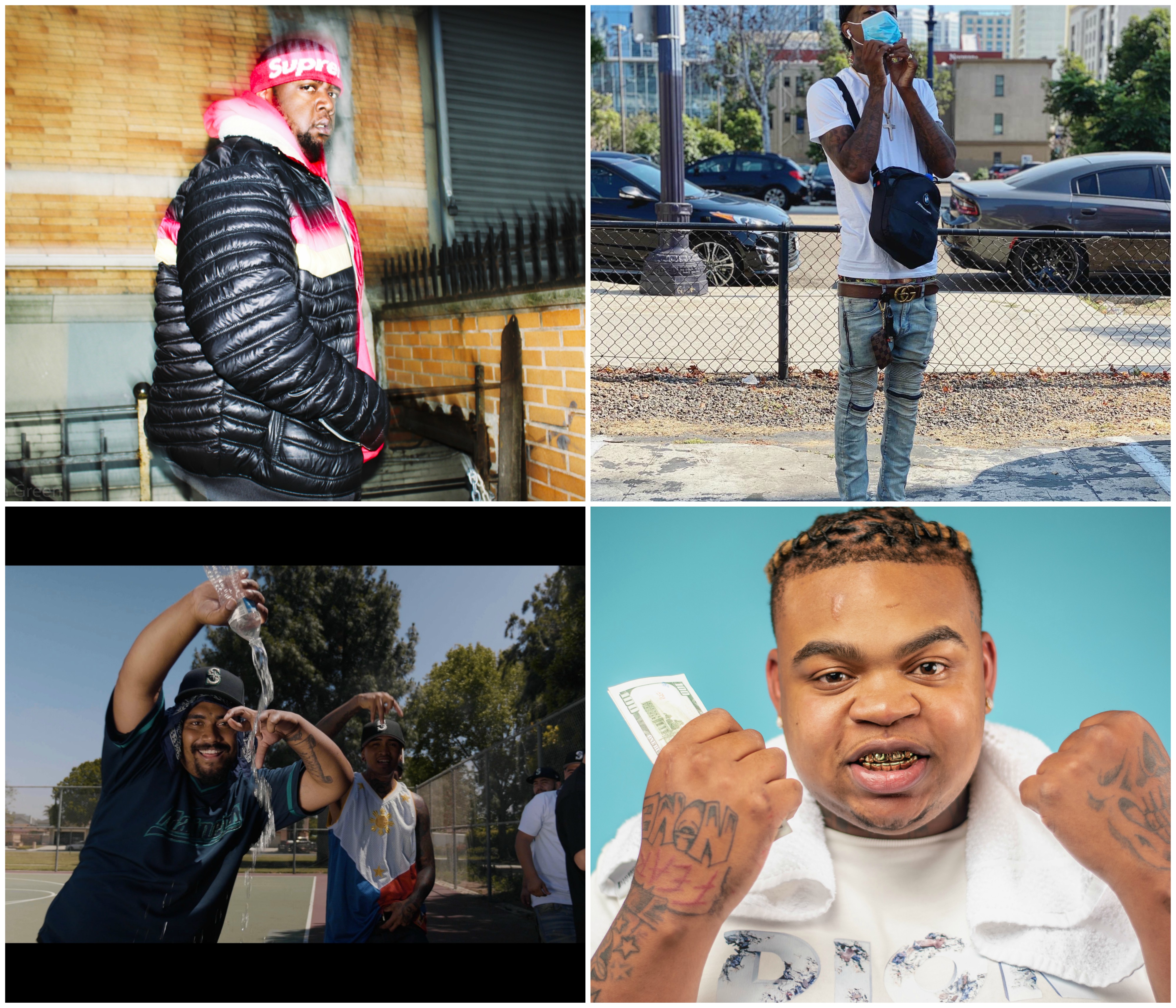 The list of rappers who claim they “don’t write” grows every day. The implication seems to be that every song is spontaneous, one-take with no punch-ins, re-recording, etc. This is patently untrue. Jay-Z — one of the first to vocally declare he doesn’t use a pen — cleared up that misconception long ago.

Big Yavo (pronounced yay-vo, not yah-vo) first gained attention outside of his native Alabama when he released “No Pen” in late December of 2019. If you listen to the final seconds, you can hear Yavo mumbling as he searches for the next line. But the titular conceit is irrelevant. Yavo raps his ass off in the 90 seconds before that, stacking similes and finding clever ways to paint the menacing: “I’m throwin’ nine bullets in the wind / Bitch, what’s that? That’s a Drew breeze.”

On God, Yavo’s first official project since he began releasing singles in August of last year (see “John Cena”), is overflowing with songs that build on the template of “No Pen.” You can point to “On God,” “Optimus Prime,” or “Scoot Up.” Yavo raps on 100, almost yelling every couplet until he does just that. His energy is undeniable. He captures the accretive glee of landing one punchline after another. At the time of this writing, On God is one of the most critically overlooked rap projects of 2020.

You won’t find “Country Boy” on the On God tracklist. Released in late July, “Country Boy” is one of the best songs of Yavo’s short career. Lines other rappers would save for a verse become a catchy hook. Yavo rocks designer, sips drank imported from Dallas and smokes weed that’s too good to pass. Like so many artists of late, we’re watching Yavo develop in real-time, a song at a time. With or without a pen, he’s one of the most promising rappers in Alabama.

Brooklyn drill notwithstanding, New York rap has spent the last decade moving toward minimalism. Roc Marciano and KA pioneered the form: laconic yet intricate hustler raps over a single loop and maybe some soft drums. The instrumentals are as skeletal as the fiends present or implied in every bar. You don’t need Timbs, cargo shorts, and a map to see how Marci and KA begat Griselda and their affiliates. As Griselda has risen, so has Harlem’s G4 Jag.

Jag released one project between 2017 and 2019, but he’s been prolific since the dawn of the latter: Three albums last year (start with The Survivors) and three albums this year. He’s from the same Raekwon and Kool G Rap lineage as the Griselda crew but less concerned with designer fabrics. The people “grinding on the day to day” (“Make a Plate”) matter more. He’s closer to Sean Price albeit more ice grill, forgoing P’s comic punchlines in favor of grim personal revelation. His voice, graveled and resonant, booms. Jag often chooses sparse beats, but his voice always rises above even the most cavernous drums.

His latest album, the Dirty Diggs-produced Keep Goin,’ refines that approach. It’s another attempt to move forward, to relish the fact that his plate is no longer empty while making sense of the bricks moved, fiends served, and friends lost. Like a more plainspoken KA, Jag brings you the granular and ground-level without the literary trappings. “Make a Plate” is the album’s first single and encapsulates all of the above. Over Diggs’ ominous loop, Jag distills his ethos and his environment in one couplet: “I’m the heart of the people starving / Its more cemeteries than gardens.” Minimalism of that caliber warrants a bigger audience.

The dramatic tension in G-funk lies in the inherent juxtaposition. Bright, bouncing instrumentals rooted in funk score tales of homicide, police harassment, and lifelong incarceration. Mentions of BBQs and beautiful women cohere with synths that sound like rays of sunshine, but they afford short-lived comfort. The prospect of yellow tape and closed caskets always looms. At least there are palm trees and ocean breezes. Right?

Slumpboyz are from Oxnard, an ocean-side city roughly 60 miles northwest of LAX. The Visit Oxnard website advertises the white sand beaches, but they say nothing of Terrace Ave. and the Slumpboyz’s gang-heavy neighborhood on the Southside. Affiliated with the Sons of Samoa Crips, the sextet has been making reverent yet modern g-funk since 2018. This isn’t kitsch or affectation. They were clearly raised on g-funk, steeped in decades of West Coast rap (see their Egyptian Lover interpolation “Spooky Szn”).

Last year, they had a local hit with “Walk ‘Em Down,” an alternately breezy and thumping single with lyrics as gleeful as they are grim. What the group lacked in polish, they made up for in confidence and fun. Shooting the enemy and hustling may have never sounded so enjoyable or relaxing. And there was the hook from Saby, whose crooning floats while remaining in his range. His voice isn’t as resonant as Nate Dogg’s or as flexible as anyone’s in Bone Thugs, but it’s unique and irresistible. “Walk ‘Em Down” has millions of plays across streaming services. If L.A. radio played regional hits, you would’ve heard it blaring from every car last summer. Like Boo-Yaa T.R.I.B.E. before them, Slumpboyz are putting on for gang-affiliated Samoans.

“In My Section,” the group’s latest single with a video, has racked up over 100,000 views since mid-July with no publicist or label to push it. It’s another trip through the Southside soundtracked by warm synths, rubbery bass lines, and drums that smack with hydraulic bounce. Guns are tucked or aimed at the opposition, and they’re still shouting “Free Playa” (their compatriot) until it’s backward. If you listen to Saby at the end of the hook, though, you can hear him voice his fear of an early grave. Ideally, Slumpboyz will break beyond their section of Oxnard soon.

Earlier this month, Jay released his second project, Coochie Land. It’s a marked stylistic departure from 2019’s MVP in every respect and arguably the most lustful rap record of 2020. Here Jay adopts an entirely new delivery. He raps with a comic, almost sprightly whimsy and swagger of Mac Dre. He raps in different voices, draws out words like they’re self-contained riddles. You never know if he’s entirely serious, but that’s the point.

Jay dropped the video for “Coochie Scout” in the middle of the month and it’s rapidly approaching 400,000 views on YouTube. This is the sound of Coochie Land distilled: hilarious, outlandish, and unrepentantly horny. Jay raps with a lilt to his voice, pausing between bars as if he can’t believe them himself, saying, “Hold on” and “Hmmmmmm.” There are too many quotables, many of which sound better on record than they read, but I’ll leave you with this one: “You won’t see me in the club if it ain’t coochie there / She licked the ice cream off my face, they think Gucci here.”

Until Sept. 1, you can stream Stockton on My Mind for free. (It will be available on HBO after that.) A documentary about Michael Tubbs, the first Black mayor of Stockton, CA, it’s also an attempt to document the decades of poverty, violence, and socioeconomic inequities that have made Stockton one of the “most dangerous cities in America” (according to USA Today). If you want a frontline perspective from the Southeast section of the city, you should listen to Young Slo-Be.

Over the last year, Slo-Be has become one of the most prominent rappers in Stockton and the Central Valley. Most probably first heard him on “2142,” his collaboration with the late Sacramento star Bris. Here you can hear Slo-Be’s distinctive style, an authoritative half-whisper that sounds like he’s forever worried about wiretaps. His latest project, Slo-Be Bryant 2, dropped in late July. Each of the eight songs (a numeric homage to Kobe) attests to the perils of life in Slo-Be’s neighborhood. He reflects on robbing to survive, the pain of losing family to gun violence, and the necessity of staying armed.

One of the first singles from Slo-Be Bryant 2, “G-Way” is peak Mobb music. The bass and synths are deep and baleful, funky but frightening. Slo-be questions the opposition’s street bonafides (“You say you in the field, right? He got no tackles”) and alludes to taking them out before the opposite happens.  In the best of all worlds, Slo-Be’s music will allow him to make it out of Stockton and affect change in the city.