Come Back and Love Hinds <3 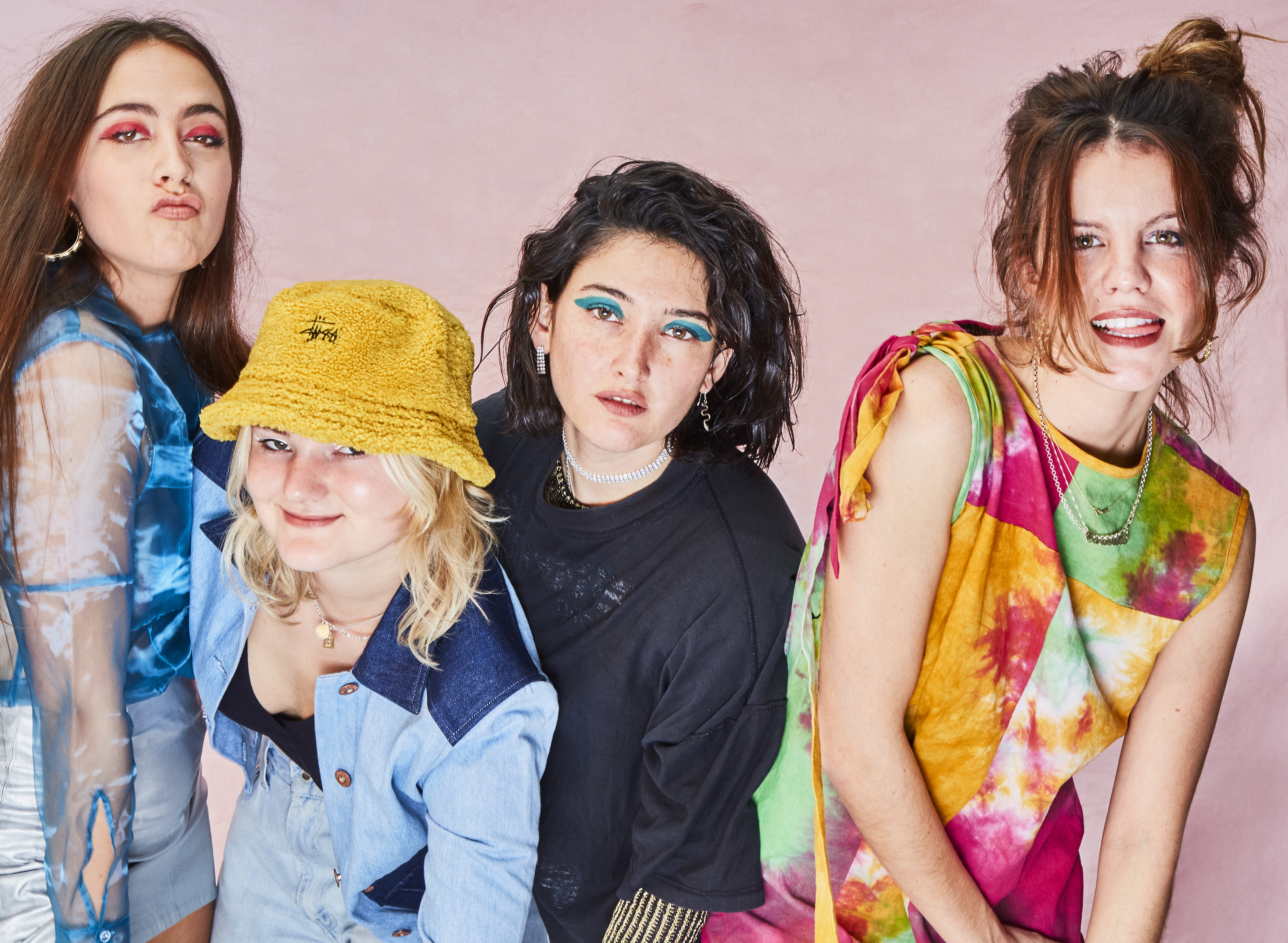 Hinds never wanted to be a pop band. Sure, there would be occasional pop melodies they’d toy with, but full-on? Not for them. With their third studio album The Prettiest Curse, that changed. Ditching the lo-fi, chaotic, garage rock ethos strung throughout their first two records, the Madrid-based four-piece opted for something bolder, reworking their musical formula and taking a leap into a more polished arena. And with this evolution, the band, comprised of Carlotta Cosials (vocals, guitar), Ana Perrote (vocals, guitar), Ade Martin (bass) and Amber Grimbergen (drums), has strengthened their bond.

Formed in 2011 as a duo called Deers featuring Cosials and Perrote, the band reemerged after a hiatus under the Hinds moniker in 2014. With the release of their surf-rock-tinged debut album Leave Me Alone two years later, Hinds added two more members to the mix with Martin and Grimbergen. They followed it up with their sophomore effort I Don’t Run two years later, featuring familiar jangling guitars, but a more seasoned take on their pet themes of romance and the loneliness of being on the road.

Produced by Jenn Decilveo (The Wombats, Ben Platt, and Anne-Marie), The Prettiest Curse lets the band’s imagination run wild — in particular on songs like “Come Back and Love Me” — while diving deeper into the isolation that comes with being an artist, which is in their mind “the prettiest curse.”

“If you’re an artist, most of the time you cannot help it in a sense, that’s what makes you happy. That’s what you need to survive,” Perrote says. “It’s like “I’m cursed,” [but] obviously the prettiest curse is what makes us the happiest,  it’s our passion, and it’s a luxury that we can do what we do.”

We spoke to Perrote prior to quarantine when their album was originally slated for an April release date (they ended up pushing it back to June 5). In our conversation, she discussed digging beyond romantic relationships in their music, the “sisterhood” of the band and weaving their native tongue into their songwriting for the first time.

SPIN: What was the process of making The Prettiest Curse?
Ana Perrote: It was, first of all, very different and very nice, because, especially for the first time, we had time to think about it. Pretty much, the last couple of years, well, five years, we have spent just touring nonstop. And, the last two records were done pretty much in a rush, like [in] one month or whatever time we had before we were going back on tour again. So, it was very refreshing to get out of our comfort zone, travel and just try different things.

You guys became well-known for your lo-fi, garage rock aesthetic. What interested you in developing your pop side?
It was definitely something we wanted to do because the albums we did in the past were very well-taken pictures of where the band was at the moment. The first one was a very DIY, fun, punky, baby album because that’s who we were at that moment. We just had started the music, just started with our instruments and writing and stuff. Then, the second one came after years of touring and seeing a lot of bands. So we wanted to make a statement of, “Hey, we’re a rock band. This is what we do. Rock, rock, rock.”

We kind of did it, and after those two records, we’re like, “Cool. We’ve done that. We’ve proved that point, but then what’s next?” We knew we wanted another step, but we knew we wanted to sound a little bit easier. We sometimes joke about how it is hard to listen to Hinds, depending on what record you [listen to], but it’s just very specific and sometimes very lo-fi. So we knew we wanted something more accessible to everyone. [We were like], ‘Maybe we’ll have funky type chords on it,’ or ‘maybe we’ll sound more classical.’ We had no idea. We basically tried everything, and we ended up shaping the sound.

What does the title The Prettiest Curse mean for you?
It’s a concept we have been using for quite a while in joke mode. We used to say, between us, that we were cursed because when you’re a musician, you kind of feel like you are trapped in a world going twice as fast as the speed of a normal life. Your life is starting backward, and you’re far away from everyone, and you’re constantly stressed out by people, but then you’re also alone all the time. If you’re an artist, most of the time you cannot help it in a sense, that’s what makes you happy. That’s what you need to survive. So it’s like “I’m cursed,” and then obviously the prettiest curse is what makes us the happiest, and it’s our passion, and it’s a luxury that we can do what we do.

How did that “curse” idea inform the sound and visual aspects of the record?
So a couple of weeks before going to the studio, CC [Carlotta] was like, “Guys, we should have a concept that ties all together” because obviously after a year of writing we thought [about] a lot of different angles. We decided that we wanted to [display] a magical perspective. So that curse, there’s weird sounds in the album that are voices but then that sound like guitars, now guitars sound like drums. And we had a lot of fun in the studio, just playing with it. Obviously, with the visuals, we wanted to have a cover that wasn’t simply a picture of us like the first two albums. We wanted to create a whole imaginary Prettiest Curse and imaginary Hinds, which is a little bit of a venue, a little bit of a house, and a little bit of a hotel.

Which are the most meaningful songs for you on the album?
I really like “Burn” and “Just Like Kids” because we talk about for the first time the subject, “So, how does it feel to be a girl in a band?” ‘Cause usually, in the last few records, we talked about love and the feeling that comes after love, but it was mainly through relationships. For the first time in this album, we talk about other kinds of relationships like that one, and I think “Just Like Kids” really sums up what it means to be in a band and all the bullshit you have to go through and listen to. I also really like the lyrics of “The Play” because it’s very introspective. It’s not about a relationship; it’s about the relationship you have with yourself and going through a personal crisis and an identity crisis. I think we got to be braver with this album. It’s not always about us. Sometimes, it’s just about me, which it’s very scary to talk about [myself], but I’m happy we did it.

You’ve said that Mac DeMarco was a huge influence for you in the past. Who were you listening to most this time around?
We were all over the place. When we stopped the touring, we were like, “Okay, what are we going to do next? What’s the record going to be like?” Most other bands or people have one record they love or a couple of records. They’re like, “I love the drums from here, the guitars here, and the vibe here.” We had nothing like that. We were super all over the place, which I think in the end, let us create really freely. I think it was an accident, but that accident made a sound that’s very Hinds, I think. We like Tame Impala, Kali Uchis, and the Jesus and Mary Chain. I think somehow we managed to mix all of that together.

Where do you see Hinds going in the next five years?
I don’t know. For now, I’m not thinking about it. I’m mentally giving myself a break. We’re just enjoying the wave. We’ve been one year working on this. We never go where I think we’re going to go, which is great.

Hinds Give a Nutty Visualization of Romance in ‘Warts’ Video

Hinds Get Their Faces Dirty in ‘Easy’ Video

Review: Hinds Beat Your Brains By the Beachside on ‘Leave Me Alone’