After 25 years, Eric Hilton will be releasing his first solo album.

Titled Infinite Everywhere, the Thievery Corporation co-founder has been known as half of the duo behind lounge-friendly beats, but this record will showcase his vast skills as a multi-instrumentalist.

Recorded at The Winter Palace in Washington, DC from September 2019 through March 2020. The album title and concept predate the current global crisis, though the timing for the doom and gloom is eerily prescient. Sonically, the record is a bit more narrow in scope compared to Hilton’s work in Thievery Corporation.

“When you’re making music, you have a responsibility to contribute to music in general — to try to express a unique thought — which is very difficult. I want every record I’m involved with to be beautiful, with empowering vibrations that recognize the spectrum of emotions. I don’t entertain defeatism, and I will always gravitate to positivity and perseverance. Hopefully people get that feeling when they listen to this record.” 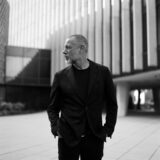 5 Albums I Can’t Live Without: Eric Hilton of Thievery Corporation

“Infinite Everywhere is an introduction. The last 25 years of my creative output have been about Thievery Corporation. I dearly love my brethren, Rob, and although that project isn’t necessarily done, my solo stuff is what the next 25 years are about.”

And on the title track, that vibe can be felt. The vibe is simple, but as puts, “isn’t just a doorway to the album, but a potent rhythmical mantra for willing ears.” It has methodical pacing makes it perfect for a chill afternoon or relaxing at home.

“Infinite Everywhere is so simple but it always gets me into my chakra mode; there’s a realignment that comes when listening to it,” he says. “When I meditate, I become vapor, flowing free around the earth or the atmosphere. I let myself explore in my mind, pop up on a Tokyo Street, then in Prague, or on the Ganges in India. My mind decides on the time and space. ‘Infinite Everywhere’ represents that experience of doing that,” Hilton says of the song.

Infinite Everywhere is out on June 19. You can preorder the album here.