Without Little Richard, there would be no James Brown. No Elvis. No Beatles. [ed. note: deep breath]

No Stevie Wonder. No New York Dolls. No Jayne County. No Replacements. No Ol’ Dirty Bastard. No Laura Jane Grace. No Billy Porter. No Low Cut Connie. No Kanye. Definitely no Prince. In fact, nothing funky at all. As Yasiin Bey, the man formerly known as Mos Def, put it, Little Richard is rock’n’roll. And all of these wildly disparate acts have a spark or three from an icon who always had electricity coursing through him.

When the man born Richard Wayne Penniman was onstage, he was like a catapult launching great balls of fire that kept on generating and inspiring new musicians every decade. There’s a reason he was dubbed the Architect of Rock ‘n’ Roll; he laid an impossibly strong foundation. Because otherwise it would’ve collapsed beneath his thundering performances. Despite the great loss suffered by the music-loving world yesterday, there are 65 years of spotlight-grabbing television appearances wherein Little Richard cannot be referred to as anything but alive, and that’s just how he’ll remain in our hearts. Here are nine of his gargantuan peaks as an entertainer onscreen.

Upstaging the Girl in The Girl Can’t Help It (1956)
The first time America got to experience the wonder that is Little Richard, in full technicolor, was this 1956 Jayne Mansfield star vehicle. The man explodes through a rowdy run of “Ready Teddy” and “She’s Got It” and managed to briefly distract America from this particular leading lady, no easy task. 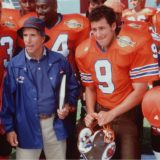 The Best and Worst Football Movies of All-Time

Driving Britain bonkers on It’s Little Richard! (1964)
Little Richard hadn’t even appeared on American Bandstand yet by November 1963, tantamount to a crime. But while on tour in the U.K. with the Rolling Stones in their young, savage prime as openers, he was invited to Granada Studios in Manchester to finally film the true TV special he deserved. Dressed more conservatively than usual at the time, Penniman nevertheless tore it up in front of a studio audience filled with British hipsters. For the duration of an hour-long set, he barreled through classics like “Tutti Frutti,” “Good Golly Miss Molly,” and “Lucille,” as well as covering Jerry Lee Lewis and bringing out the Shirelles to sing backup on the gospel hymn “Joy Joy Joy.”

Naming the joint and slaying it on The Midnight Special (1974)
From Sonny & Cher to Mike Douglas to Wolfman Jack to Donny & Marie, Penniman finally made the rounds on American television all throughout the 1970s, earning the ubiquity he long deserved nearly two decades late. During this period, the absolute peak of his live powers ever may have been his two appearances on the Don Kirshner concert series The Midnight Special — named after one of Little Richard’s own hits, of course.

Sparking a (tutti-)fruitful kinship with David Letterman (1982)
This episode of Late Night With David Letterman, his first of several appearances on the TV host’s two late-night talk series, was where Richard first declared himself “the Architect of Rock ‘n’ Roll,” in an extensive interview with Dave. But it also included a beautiful performance of the Christy Lane Christian Country ballad “One Day at a Time” featuring jazz-guitar great John Tropea on acoustic strumming.

Scorching his old rival with Living Colour on The Arsenio Hall Show (1990)
Richard reintroduced himself to Generation X by guesting on the second Living Colour album Time’s Up, laying down an empathetic rap for the man who stole his crown on “Elvis Is Dead”. The icon would also make his second appearance of 1990 on the Arsenio Hall Show by joining the New York City band for a raucous live run through the cut with Fishbone’s Angelo Moore on saxophone.