Bush frontman Gavin Rossdale has spent a couple of decades rocking his way through festivals and various stadiums around the world, but he admitted he was a little nervous at the start of his stripped-back Instagram live performance as part of Global Citizen’s #TogetherAtHome series last week.

“It just felt very nerve-wracking doing a show on my own. And also, just the fact of the potential for downfall … ‘Oh, you want to go viral? Really screw up!’ I suddenly was like, ‘Why did I tell myself that?'” Rossdale told SPIN when we caught up with the Bush rocker. “But also, there’s a sense of – I’m English, right? So, there’s part of me that’s kind of going, ‘Do people really want to watch this?’ … But … it was a beautiful thing to do. There’s been a great reaction to it.”

During his #TogetherAtHome set, Rossdale played “Love Remains the Same,” from his 2008 solo album WANDERlust, Bush songs “Letting the Cables Sleep,” “Glycerine,” and “Come Down,” and a cover of Cyndi Lauper’s “Time After Time.” Rossdale has performed the Lauper classic before – at a benefit – but said it hasn’t made it into a Bush set list as yet because one member of the band – guitarist Chris Traynor – usually takes a pass on the cut’s inclusion.

“Every time I bring it up, he’s like, ‘Nah … Let’s not do that.’ And so, when I was doing it the other day, I was thinking, [there’s] the freedom of not having to, you know, go before the committee for the setlist. It’s quite fun. That was quite interesting,” he laughed. “But then I was like, ‘Is he right? Should I not do it?'” 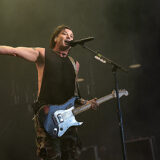 Rossdale can consider that question again when Bush embarks on their next tour – which, as of now, is set to take place this summer with Breaking Benjamin. The trek, described as a “shed tour,” begins in Virginia in July and winds its way across North America before wrapping up in California in early September. Bush will be supporting The Kingdom, the follow up to the band’s 2017 LP – Black and White Rainbows – which is due out on July 17.

In late February, weeks before Americans were asked to practice social distancing, the band debuted their new single, “Flowers on A Grave,” at a show in Las Vegas. Rossdale, though, took a somber and candid tone when asked if it was hard being on the cusp of releasing a record and not being able to currently play live – beyond web-based performances – for fans.

“There’s so much tragedy and so many heroic people working on the frontlines to save people and losing that fight and dying themselves, I haven’t taken one second to reflect on my personal misfortune for not being able to tour or something like that, you know? I know that the last thing that will take us back to where we used to be, that we took for granted for so long … is, I think, large gatherings. It’d be the last thing to be put in place whenever that happens,” he said. “And I think that there’s going to be such a sense of triumph and global triumph. In a most tragic, awful way we’ve never been so united. And it’s just an interesting time where everyone is as fragile as everyone else.”

Rossdale says that Bush’s new record is “heavy,” and “thick and wide and like molasses.” It will feature the song “Bullet Holes,” which soundtracked the John Wick: Chapter 3 – Parabellum end credits and the new single, which was produced by Erik Ron and Rossdale. And the latter cut is a good teaser – sonically speaking – for the upcoming 12-track LP.

“It’s really in that vein. We wanted to make a really consistent record, and I was really just jamming out so much on sort of heavier, cyclical music and good riffs,” he said.

“I don’t actually overthink it when I write. I feel really good about writing and really at the kind of center of my creativity – the wheel of my creativity,” the singer explained. “It took walking across the mountains to get there, but the delivery and the execution was just instant and just really sort of cathartic and sort of fell off me like clothes, you know, these words. So that was really a good sign that the energy was right.”

The frontman was also involved in co-producing duties on The Kingdom (alongside producer Tyler Bates), something he’s done across a host of the band’s records and his solo output.

“It more feels like caretaker – I’m the one from the beginning of the song to the end of it. I’m first one in, last one out on every single song, no matter what I do, or who I do it with. So maybe I should just be like ‘caretaker,'” Rossdale said.

“But I suppose it’s just writing songs as well – you’re always [in] a sense, being [a] producer. But it’s really collaborative. Look, I’ve worked with Clive Langer [1994’s Sixteen Stone, 1999’s The Science of Things], Steve Albini [1996’s Razorblade Suitcase], Bob Rock [2011’s The Sea of Memories], Nick Raskulinecz [2014’s Man on the Run], Dave Sardy [2001’s Golden State] – [a lot] of really, really great people and you just sit in a room and you’re working on stuff. And as a songwriter, I’m never sat there without an idea. They’re just either going to change it or they’re going to improve it or make it less good or agree,” he laughed. “And that’s what we get to. And I think that it’s a really safe place where everyone’s been working together, knows each other, and we’re just really free and we know what we’re doing.”

And Rossdale is looking forward to fans – old and new – being able to hear more of what Bush has come up with on The Kingdom.

“It’s really brewing,” Rossdale said of the record. “And I think that the most beautiful thing that can happen for us is some people who just discover us through ‘Flowers on a Grave,’ go listen to that record [and] don’t even need the catalog, don’t even need the other stuff. … And then conversely, people that love our stuff and have given us everything we have, they just go, ‘Fuck! This is amazing.’ It’s like giving a – it’s a whole continent. A record is a whole continent and it’s really specific and if you were on the other one you’ve just got to get off that boat and go on that one because that’s where it’s jamming right now.”