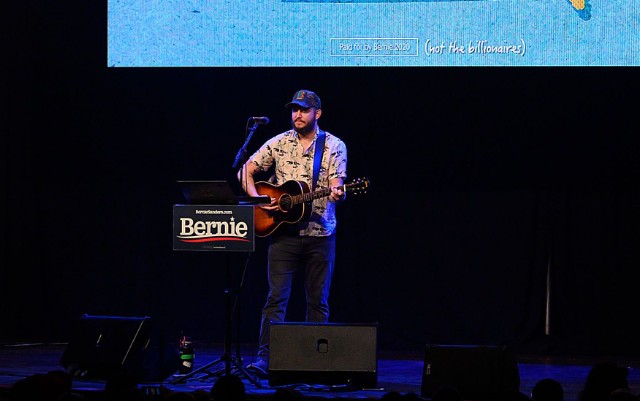 Justin Vernon performed and career-spanning, eight-song set, which included a pair of covers from none other than Bob Dylan. The songwriter opened with a solo acoustic rendition of Dylan’s The Times They Are a Chaingin’ cut “With God on Our Side,” followed by a setlist of originals including “Flume,” “Towers,” “Blood Bank,” and “For Emma.” Elsewhere in his set, he covered Leon Russell’s “A Song for You” before closing out the night with another Dylan classic: “The Times They Are-a-Changin’.”

Bon Iver shared a statement with his original announcement, which included a few words of praise for the Vermont senator. “There are promises in our constitutional language that are being superseded by money and greed in this country,” Vernon shared. “I believe that Senator Sanders is the only one that has the pedigree, the experience, the courage, and the undying spirit to begin to put these obstacles of freedom to rest.”

Watch Vernon’s Iowa performance below starting around the 3:02:00 mark.

Never have I ever been truly honored to be asked take a selfie before. Rashida and co. Killed tonight; so inspiring and so real… doing the real work for the people! https://t.co/KMQCs9ofMu