Diddy at Clive Davis Pre-Grammy Gala: “Hip-Hop Has Never Been Respected by the Grammys” 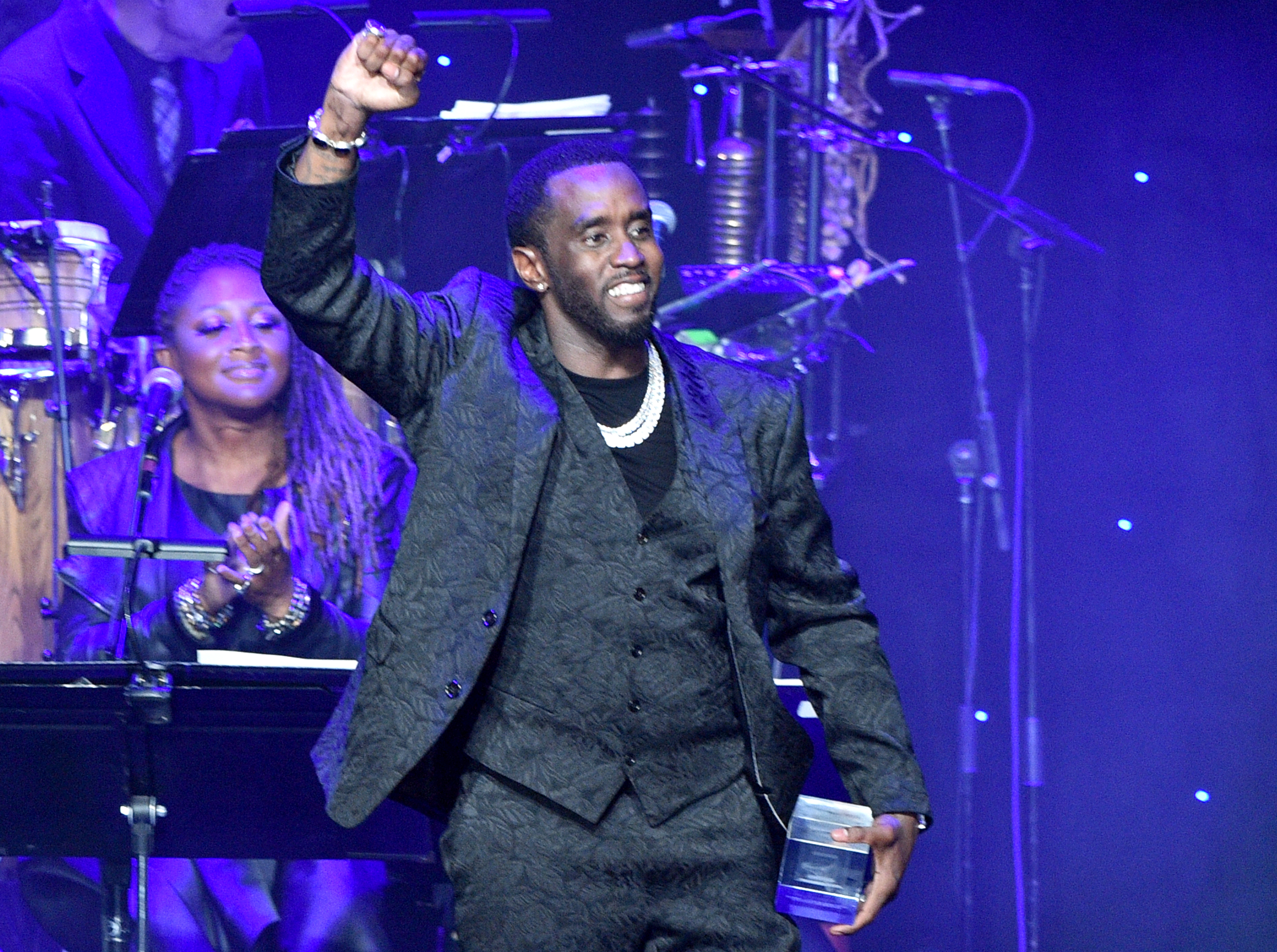 For nearly five hours, performers and speakers at the Recording Academy and Clive Davis Pre-Grammy Gala largely avoided the turmoil that has threatened to overshadow Sunday’s annual awards show this year.

But at the end of his lengthy acceptance speech for the Salute to Industry Icons Award, Sean “Diddy” Combs rewrote the night’s headlines with a stunning six-minute monologue that addressed the “elephant in the room” and put the Recording Academy on notice.

Before a startled crowd at the Beverly Hilton hotel on Saturday (Jan. 26), the Bad Boy Entertainment boss went on to deliver a call-to-action for changes he wants to see implemented prior to the next year’s Grammy Awards.

“We need the artists to take back control, we need transparency, we need diversity,” he said. “This is the room that has the power to make the changes that need to be made. They have to make the changes for us. They’re a non-profit organization that’s supposed to protect the welfare of the musical community. That’s what it says on the mission statement. That’s the truth. They work for us… So sign me up. I’m here to help make a difference and help us have a positive outcome.” 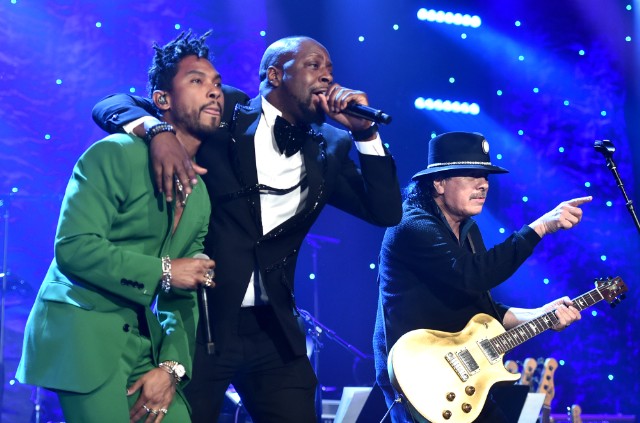 CREDIT:Photo by Alberto E. Rodriguez/Getty Images for The Recording Academy

Combs’ mic-drop moment capped off a typically star-studded night for the annual event, which remains one of Grammy Week’s toughest tickets with surprise sets and marquee guests. Speaker of the House Nancy Pelosi, a frequent attendee over the years, received a standing ovation and a shoutout from Wyclef Jean during his performance with Carlos Santana and Miguel.

Numerous artists and executives turned out in a show of support for Combs, including Jay-Z and Beyoncé, who held court at a front table with performer John Legend, plus Cardi B, Offset, Usher, 21 Savage, Chance the Rapper, and Tyler the Creator. Shortly before Combs’ speech, Faith Evans, Ma$e, Lil’ Kim, and Carl Thomas were joined by King Combs in a medley tribute to the honoree.

Other show highlights included Beck’s cold opener, a fiery duet of “Girls Just Want to Have Fun” from Cindi Lauper and Brandi Carlile, and a soaring performance by Broadway star Adrienne Warren, who plays the lead role in Tina – The Tina Turner Musical.

Branden Chapman, The Recording Academy’s head of production and chief business development officer, hinted at Warren’s well-received debut prior to the event.

“Clive resonates towards powerful vocalists, it’s something that comes through every year,” Chapman said. “He wants to know that multiple times during the show, we’re going to have a voice or a performance like a Whitney, like a Jennifer Hudson. He has a real affinity to these typically female vocalists who can just bring the house down.”

Below is the transcription of Combs’ closing remarks:

Now to my other family, my musical family. During the hardest year of my life [the death of longtime love Kim Porter], all of you were there to check on me and push me up. And I want to tell you I appreciate that. I love that. And I wouldn’t be here if I didn’t get those messages. I want to thank everybody here from the bottom of my heart that really cared about me. And we are a musical family. We have to be there for each other.

And now because we are a family, I have to be honest. The last few days I’ve been conflicted. I’m being honored by the industry that I love, the family that I love. But there’s an elephant in the room, and it’s not just about the Grammys. There’s discrimination and injustice everywhere, at an all-time high. But there’s something I need to say to the Grammys. I changed my middle name to love. So it’s Sean “Love” Combs now. So I say this with love to the Grammys because you really need to know this.

Every year, you all be killing us, man. Man, you talk about the pain. I’m speaking for all the artists here, the producers and the executives. The amount of time that it takes to make these records, to pour your heart out into it … and you just want an even playing field. In the great words of Erykah Badu, we are artists and we are sensitive about our shit. We are passionate. For most of us, this is all we’ve got. This is our only hope.

Truth be told, hip-hop has never been respected by the Grammys. Black music has never been respected by the Grammys to the point that it should be. So right now in this current situation, it’s not a revelation. This thing’s been going on. It’s not just going on in music. It’s going on in film, going on in sports and going on around the world.  And for years we’ve allowed institutions that have never had our best interests at heart to judge us. And that stops right now.

I’m officially starting the clock. You’ve got 365 days to get this shit together. We need the artists to take back control, we need transparency, we need diversity. This is the room that has the power to make the changes that need to be made. They have to make the changes for us. They’re a non-profit organization that’s supposed to protect the welfare of the musical community. That’s what it says on the mission statement. That’s the truth. They work for us.

Now we’re not going to solve this tonight. But it’s going to take all of us to get this done. It’s going to take the artists and executives to recognize their power. And I’m standing here today not to just bash you all because as I said, you’re a non-profit organization. We just need to get it right. And I’m here for the artists.

So sign me up. I’m here to help make a difference and help us have a positive outcome. I believe all of my brothers and sisters out there will  be willing to work on getting this right. Because we just want it right. We just want to be able to go to the Grammys. You’ve got to understand. We’ve seen Quincy Jones and Michael Jackson; Michael Jackson’s holding eight Grammys and he was dropping the Grammys. But you know why he was dropping the Grammys and why he got eight Grammys? Because they never nominated him for Off the Wall. So Thriller was his revenge. It wasn’t his honest work. It was his revenge. He’s like, all right, you all want to fuck with me?  I’m going to take your souls. And then we had Thriller.

My goal used to be about making hit records. Now it’s about ensuring that the culture moves forward. My culture. Our culture. The black culture. And for me to be worthy of receiving an icon award, I have to use my experience to help to make a change.