The Who‘s first album in 13 years, Who, is out next month, and in honor of the occasion, Rolling Stone published a new profile of the band’s surviving members Pete Townshend and Roger Daltrey. The story begins with the historically contentious duo swearing that they’re friends.

“I used to say that I love him, but with my fingers crossed,” Townshend said of his bandmate. “Now, I like him too. I like all his eccentricities, his foibles, his self-obsession, and his singer thing. Everything about him.” Daltrey, in a separate interview, said, “I hope he realizes I care about him.”

The following quotes appear later in the article.

Townshend on Daltrey’s stage presence: “If you watch Roger onstage, he goes through a lot of visual phases. Sometimes, he can’t stop himself looking over at me. It’s irritation. It’s irritation that I’m even there.” 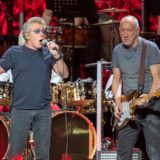 The Who Detail 2022 North American Tour

Townshend on Daltrey’s singing skills: “He becomes an actor. It’s almost like he’s a late-Fifties, early-Sixties Method actor, who when you say, ‘Here’s the script,’ he goes, ‘Oh, uh…’ and the directors go, ‘For fuck’s sake, just say the words.'”

Daltrey on whether he deserved more writing credits throughout the band’s history: “I should have, but I can’t be bothered to make a fuss about it now. It’s fucking bollocks. If [Townshend] needs the money…”

Daltrey on Townshend getting mad at venue security guards: “Usually, I’m the one Pete is mad at.”

On the new album: “Daltrey and Townshend recorded it earlier this year in London and Los Angeles without ever being in the same room.”

On the duo’s accommodations in Dallas: “Roger Daltrey, for reasons unknown, has checked out of the Ritz-Carlton and moved to another five-star place 100 yards away.”

These old men can’t stand each other.