In 1999, four guys from Long Island formed a band called Taking Back Sunday, and they had dreams of making it big. Or if not big, at least to play their songs to rooms full of people who actually wanted to be there.

Not long after, the band signed to Victory Records and recorded a debut full-length album. And by the end of 2002, Taking Back Sunday was a headlining act thanks to their LP, Tell All Your Friends, which had been released months earlier in March.

The record was full of high-energy pop-punk and post-hardcore tracks with smart, biting lyrics about love, drugs and self-deprecation in a post-millennial world. It was catchy and angst-ridden, exciting and chaotic. Tracks “Cute Without the ‘E’ (Cut From the Team)” and “You’re So Last Summer” became emotionally fraught anthems for drama kids with swoopy haircuts and precocious reading lists. The album helped define what is now referred to as the early-aughts emo movement.

In the band’s early days, Taking Back Sunday was singer Adam Lazzara, guitarist John Nolan, bassist Shaun Cooper, guitarist Eddie Reyes, and drummer Mark O’Connell, but the magic didn’t last long. Taking Back Sunday’s rapid success was overwhelming, especially for Nolan and Cooper, who dropped out in 2003 before recording the sophomore album, Where You Want to Be. While Nolan and Cooper went on to form a new band called Straylight Run, Lazzara, Reyes, and O’Connell continued with Taking Back Sunday, and in 2006, TBS saw mainstream commercial success with “MakeDamnSure” from third album Louder Now.

Then in 2010, O’Connell had the idea to get the old lineup back together. Enough time had gone by to make the old band of brothers nostalgic for what had been, and after a series of heartfelt phone calls, the crew was back. The foursome recorded a self-titled album in celebration, and earlier this year, commemorated two decades together with a 21-track career-spanning compilation album called Twenty.

The group further celebrated the milestone with a yearlong world tour during which they’ve performed Tell All Your Friends every night in its entirety. Fans from Australia to Europe to Asia and beyond have gathered to scream the lyrics and relive the album’s magic. It all wraps up with a hometown blowout at New York City’s Terminal 5 November 15 and 16.

“It’s amazing to think about the place that Adam and I were at with those lyrics, how much anger and frustration and sadness were in there,” Nolan tells SPIN of their debut album. “And then it ends up making people really happy and bringing them together somehow. It’s an amazing thing.”

The following interview has been condensed for length and clarity.

Are you feeling positively steeped in the past by now?

It’s been a good run, doing this whole thing with playing the albums every night. It’s been fun, but we’re definitely ready to go back to choosing whatever songs we want in our setlist. … I think next time we tour, we might just change it up every night just because we can.

What’s it like to perform something that you wrote when you were so young?

Well, in a lot of ways, you don’t feel the same. The emotions and the circumstances that led to these songs, obviously, they’re not as up front and present anymore. You’ve got to find a way to connect with the songs, and I think for us, it really helps that the response we get from the crowd, there’s a level of excitement and seeing people sing it back to us. There’s a mutual thing happening with the crowd where we’re feeding off of their energy and they’re feeding off our energy. … You get caught up in the excitement of the response to the songs.

I’d love to go back in time a little bit and hear what you remember from the recording process of this album.

Even though we weren’t anticipating making something that anyone would care about it in 20 years, it was our first time working with a real record label in, like, a real studio. So, it was extremely exciting. Just the idea of knowing this thing we’re recording, you’re going to be able to walk into a record store and see that and buy it—that was really amazing. We were extremely excited about the whole process.

We didn’t anticipate anything more than just being able to have a record in stores and then be able to go on tour and hopefully people would know the songs. It’s kind of funny looking back now because all of us were still working regular jobs.

What was your job?

At that time I was repairing upholstery in cars. Luckily, it was flexible, which is kind of why I got the job. I was very serious about trying to make it with the band, so they were flexible enough to give me days off when I needed them. We were commuting to Jersey City from Long Island every day to record, and then all working on days when we weren’t in the studio. It was a crazy time. Now, how lucky we are that this has been our only job for a very long time.

What do you remember about that tour for the album when it first came out?

We got a van for the first time. Before that, we’d been touring in our guitar player Eddie’s minivan, and usually packing our stuff in there or renting a trailer that he could tow behind it. So we really were able to get an actual, new Ford 16-passenger van. That was huge at the time. We had a booking agent at that point, and we had Victory Records, so we were starting to get real tours.
Before that, we’d been doing everything ourselves, and we’d been doing short tours in the Northeast and going around from Long Island.

We did a Victory Records tour where I think there was like, five other Victory bands on it or something and we were, like, first of six or something crazy like that. But it was extremely exciting because it was a real tour with bands that were bigger than us and we were going around the whole country. People would be there, y’know? It was a really exciting time for us.

What’s one thing about the early days that you miss, and what’s something that has changed for the better?

One thing that I miss, if I think about that time is just, like, not knowing anything about the venues you’re going to the cities you’re going to see. There was a level of excitement, an unknown to the whole thing, that you can’t really keep. After a certain amount of time, even though you’re still traveling and going to places, you get a level of familiarity with the whole thing. You can’t recapture that level of enthusiasm for the unknown and what’s going to happen.

I would also say on the other end, there’s something really nice about now being older and going to a city and knowing where you are; being familiar with a city that’s 3,000 miles from where you live. You feel comfortable on the road and familiar with what’s going to happen in a way that was not there in the early days. It’s a good and a bad thing on both sides.

RELATED: In the Studio With Taking Back Sunday

There was a time you weren’t with the band. What in 2010 made you come back, and what was it like stepping back into this role?

Yeah, it is hard to believe I’ve been back with the band longer than I was away from it. … I got a call from Mark, our drummer, out of nowhere proposing the idea [of my return]. I think it was the first time that I was even open to it remotely. I think a year before that, I would have just shut it down immediately. But at that point, I started to miss my connection with the guys. I think that was the first time since I left that I felt some sort of nostalgia for my experience with them, any desire to reconnect with it.
I was still really skeptical when he called. We talked a lot for a couple of days. He was the one who really sold everybody on it, even the other guys who were still in the band. He had a vision for this thing and what it could be like, and he was able to convince us. 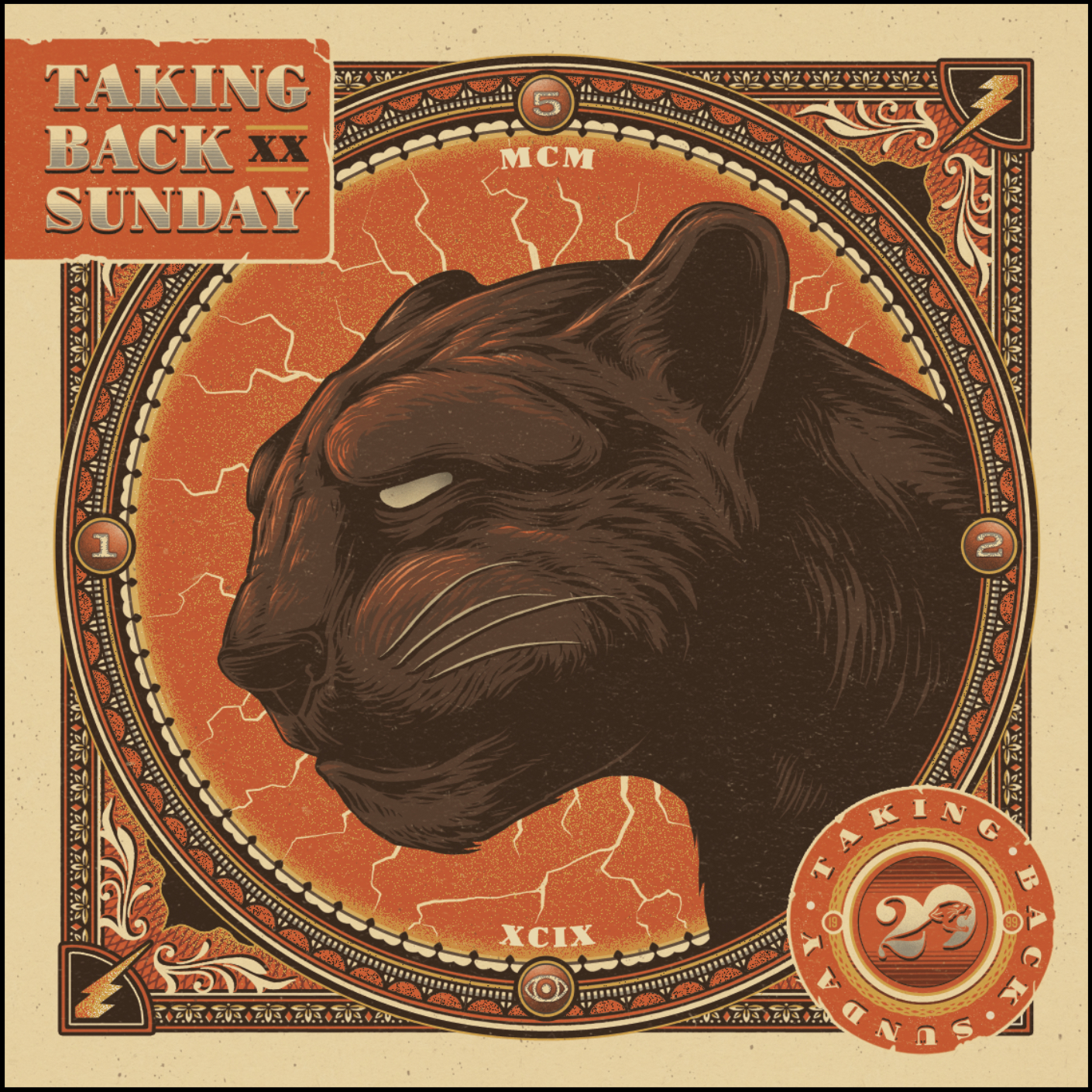 With Twenty, it’s a cool experience to have a band’s two decade career blended out where you can see how things evolved and yet keep a spirit among it. The new songs have a ballad feel compared to the rest. Is that a space you guys are feeling out?

We generally don’t come up with a plan for songwriting and the direction we’re going to take it in. Everybody comes up with ideas, and we get together to just see what ideas everyone has and what we all are excited about, and take it in a direction that makes sense to us that is fun. We don’t really know until we’re doing it what things are going to sound like.

Those two songs, that’s just that’s the way they went at it. It probably will have something to do with where we go in the future, but I don’t necessarily know that it’s going to be similar to those two songs. We really don’t know, I guess.

Are you feeling inspired?

We definitely need to take a moment and recollect and just be normal people at home for a little while. The first leg of this tour started in January. We’ve had breaks here and there, but we’ve gone pretty steadily traveled all around the world. We’ll probably take a couple of months at least to just relax, but after that, we’re going to get right back to writing, start the recording process.

Any final words for the audience at your final shows of this tour?

We can’t wait. New York City is always some of the best shows that we ever get to play, best crowds. To be wrapping up this whole year with two shows in New York City, that’s about the best way this could have been wrapped up.

What do you hope is the Taking Back Sunday legacy 20 years from now?

One thing I’ve seen so far that makes me really happy is there’s a lot of fans that we’ve talked to that have made lifelong friends because of our band, people that met their spouse because of our band and then bring their kids to the show. There’s something about the band and it’s music that has brought people together, and we’re really proud of that. I hope that continues, and I hope in the future that is a big part of what the band is remembered for; those connections that we helped create between people.