A version of this story was originally published on October 9, 2014.

In case you haven’t heard, SPIN was featured prominently in a 2014 episode of South Park exactly five years ago. Normally, we’d be honored to appear in South Park — in a way, we still kinda are — but we probably would’ve rather it happened under different circumstances.

We wrote a post about the episode before, “Gluten Free Ebola,” which featured a gag of Stan’s dad, Randy Marsh, dressing and performing as New Zealand singer/songwriter Lorde, that got a whole bunch of South Park fans riled up, saying that we were overly sensitive and missed the joke entirely. Truth be told, they may have had a point — we were probably a little (unnecessarily) defensive about a joke that wasn’t really as much at Lorde’s expense as we originally thought.

Anyway, in startling turnaround time, South Park responded to the minor controversy with a whole subplot in the episode titled “The Cissy,” in which intrepid SPIN reporter “Brandon Carlile” (chortle) investigates the aforementioned “Lorde” concert.

In the new episode, Lorde turns out to actually be Stan’s dad, living a double life as a female geologist (so he can use the superior ladies’ bathroom at work) and teenage pop star, glossing up his vocals with drums and Auto-Tune so that he ends up sounding like the “Royals” singer. Spoiler alert: “Brandon Carlile” uncovers the story but deletes his exposé, presumably panged by his conscience.

Can’t say we saw this coming, but that’s what makes South Park the show that it is: It has never taken slights lying down, and if we criticize it, we ought to be prepared to be fired back upon. Fair enough.

All told, it was actually a pretty funny episode. Anytime Trey Parker and Matt Stone want to release a full-length version of not-Lorde’s “Feeling Good on a Wednesday,” we’d be happy to premiere it on our site. 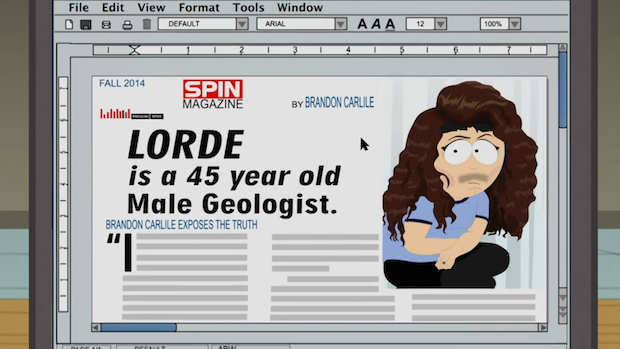