This column originally appeared in the July 1985 issue of SPIN.

A beam of light sweeps across the darkened stage, picking out a stack of overlapping triangles. Or maybe they’re squares. There’s something strange going on, the shapes seem to be moving. Music comes up, a funky bass-and-drum riff with synthesizers layered on top. The shapes are definitely moving now. The light beamed on them is changing color and pattern; as the music progresses, the shapes on the stage begin to swirl around. It’s like a three-dimensional kaleidoscope.

The audience is completely baffled. Just what the hell are they looking at? One shape moves in a way that’s almost familiar. A murmur from the crowd—some people are catching on. The music swells—then ends; the lights come up. On stage, Michel Lemieux nods to the applauding audience. He can’t bow because on his arms, chest and legs he’s wearing huge triangles.

From the hypnotic geometry of the show’s opening to its rock-opera vocal closing, Lemieux’s Solide Salad is full of surprises. The multi-media program has sold out halls across his native Canada, and was brought to the United States for the first time last spring. Backstage at the Joyce Theater in New York City, Lemieux (pronounced Luh-myuh) reflects on his career at the ripe old age of 25. 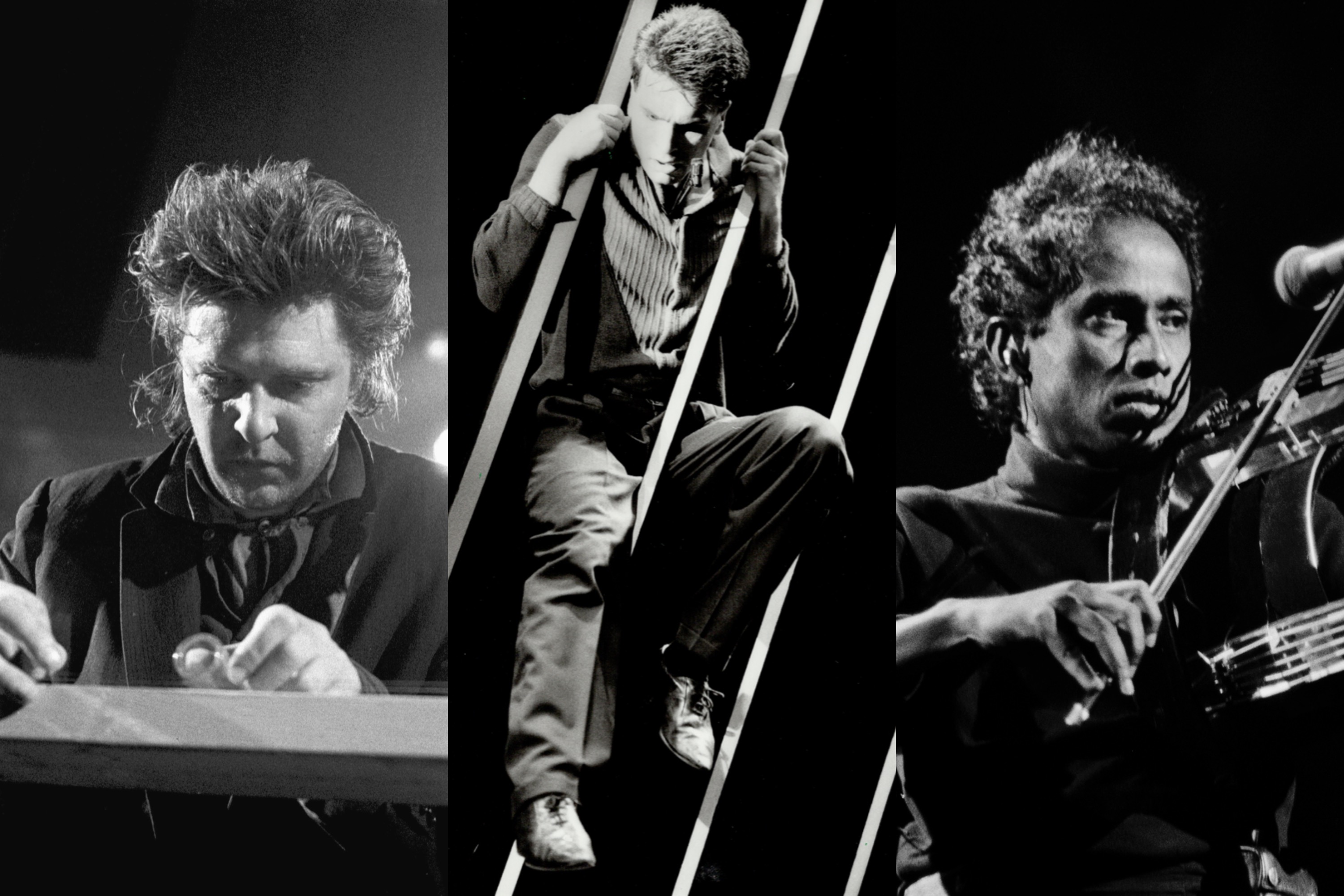 “When I was 10 years old, I was doing puppet shows in my room for my parents, just like everybody else. What I’m doing now isn’t really any different—it’s like playing in my room. But at the same time, there’s sexuality, and ambiguity. And humor.”

Lemieux is in fact a very physical performer: During his 90-minute show he climbs up, jumps over or hides behind the various props on stage. He sings in English and French, clowns, and occasionally plays a small keyboard to accompany taped music. If there’s any “meaning’. to it all, only Lemieux knows—and he ain’t telling. “I like to offer choices; I have an idea behind everything in the show, but there’s more than one interpretation of it. And my interpretation isn’t necessarily better than anyone else’s.”

What a rotten label that is, but overlooking the fact that “performance art” tells you nothing about the music, Lemieux doesn’t worry about such comparison. “In Canada, everyone identified me with Laurie Anderson. So when I saw her for the first time last summer, I was expecting a kind of guru, you know? But it was so different.” Lemieux’s performances have prompted other bizarre parallels. One New York paper described Solide Salad as “hi-tech vaudeville.”

“An old German guy once told me that my show reminded him of the German cabaret before the war,” Lemieux says. “That’s a good image for me, because there’s a lot of humor in what I do, and I’m not afraid of doing entertainment. Cabaret and vaudeville are a bit like that.”

Technology certainly plays an important role in Solide Salad, from mixing the music to coordinating the visual effects. “Technology is all around us,” Lemieux says. “Everyone has home computers or videocassettes now, so we just have to live with it.” But whereas Laurie Anderson takes an ironic stance by using the latest studio gadgetry and electronic equipment and at the same time stepping back and saying, wait a minute, all this high-tech stuff isn’t as great as it seems, Lemieux enjoys using what’s available. That includes Oscar, a small robot that joins Lemieux on stage at one point. “Technology isn’t like a big monster that’ll eat us if we don’t watch it. The little robot is really a symbol of that; it’s just a little pet that appears and you can have fun with.”

Lemieux still lives in Montreal, where he created Solide Salad last year. His performances there are so well-received that he played Montreal’s Spectrum for nearly a month. “It was the first time anyone did a long-term gig there,” he says. “For me, it’s great to be in Montreal. It’s small, but it’s big enough to have everything. If I want a costume, there are 50 people who can make it. Of course, here in New York, you could have 1,000 people, but you could never know them all. In Montreal, I know each of them.”

Lemieux is currently on the road in France (he’s played frequently in Europe), and will then go to Quebec to record his first album (TransCanada). The video for his song “Romantic Complications” receives regular airplay on Canada’s music video channel, and MTV is interested in his work.

But can Lemieux build a following in the U.S.? His success in Canada, where, God bless ’em, the national pastime is drinking beer and the national religion is hockey, proves that he can attract very different groups of people. In the French-speaking areas of eastern Canada, Lemieux explains, you find the “Latin blood; they’re really like Italians—they applaud, they shout.” But in western Canada, he claims, the people are more Anglo-Saxon. “They’re very straight, like the British. More so than here in the U.S., because you seem to have lost that. But the Western Canadians haven’t. So they’re supposed to be cold and reserved, and everybody was saying, you’re going to have trouble. But we had no trouble; the people were really warm.” In a conservative city like Calgary—”it’s like our version of Dallas,” Lemieux quips, “you know, real cowboy stuff”—Solide Salad was enthusiastically received.

About the music itself, Lemieux says, “It varies, but when there’s a beat, it’s usually funk. It’s important for me to mix the funky beat with the more European-style melodies, because my voice is a bit operatic.”

Lemieux’s music is mostly a blend of New York-style funk, Motown-brand R&B, and new wave. His press people claim there are also classical influences and even a bit of “minimalism” a la Philip Glass or Steve Reich, but quite frankly I don’t hear it. The comparisons with Laurie Anderson don’t hold up too well, either. Anderson’s music is finely wrought, incorporating many styles—from new wave to Korean court music—and the subtle irony of her performances makes them multi-dimensional: There’s often a real contrast between what’s going on at the surface and what’s being implied by Anderson’s frequent stories or visual effects.

Lemieux’s music is generally pleasant, though uneven in quality. And his performance lacks the depth of Laurie Anderson’s. But then, Lemieux’s Solide Salad doesn’t set out to be anything more than it is—a witty, clever mix of aural and visual art, and a lot of fun. Solide Salad has enough going on in it to appeal to many tastes, and that, says Lemieux, is why it’s so popular in Canada. “It’s a varied audience; they all like the show, but they don’t like the same things in it. They make their own message … they make their own show somehow. It’s just a proposition, and they interpret it however they like. And sometimes someone will come up to me with a really wild interpretation, and the next couple of nights, I’ll think about that during the show, and it may change my own approach to it.”

Stage right stands Michel Lemieux. This time, his costume actually consists of recognizable articles of clothing. From his left emerges a gleaming, dog-shaped robot. It rolls across the stage; Lemieux’s face registers surprise, then naive delight. As he rocks through the next song, to the sounds of a drum machine and the obligatory female chorus, his electronic pet follows him around the stage. Lemieux is singing into a wireless mike that circles his neck like a collar, and curves up toward his mouth like an inverted elephant’s trunk. He looks almost as alien as the gizmo rolling after him. A high-tech boy and his dog.