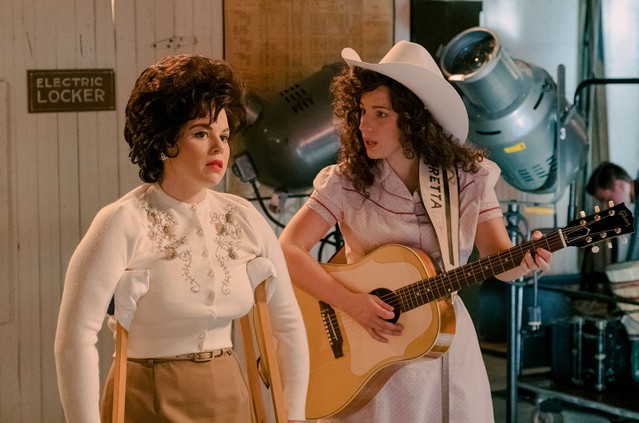 The touching story behind the real-life friendship of country icons Patsy Cline and Loretta Lynn is revealed in the first trailer for the upcoming Lifetime biopic Patsy & Loretta (Oct. 19). The two-minute teaser opens with Megan Hilty (The Good Wife) dressed in a red and white cowgirl outfit belting out “Come On In” at a packed honky tonk as she tells her husband with steely determination, “There are two things I want in this world: babies and hit records. Now you got a problem with either I just assume you let me be.”

The scene then shifts to Jessie Mueller (Waitress) as Lynn playing to a half-empty bar as she watches her possessive boyfriend flirt with another woman, even as he tells a group of record executives that their plans to add some “sparkle… and a little makeup” to jazz up her look are a no-go. The dramatized story of the pair’s relationship from Emmy-winner Neil Meron (Hairspray Live!) and Oscar-winning director and Nashville creator Callie Khourie zeros in on the first time the women meet, after Cline’s near-fatal 1961 car accident.

It follows as they support each other through personal and professional highs and lows, with established star Cline helping the less-confident Lynn find her sea legs on stage and culminating in the devastating plane crash that took Cline’s life in 1963, cued to the singer’s iconic hit “Crazy.”