Fleabag Season 2 Gives a Fresh and Honest Perspective on Grief 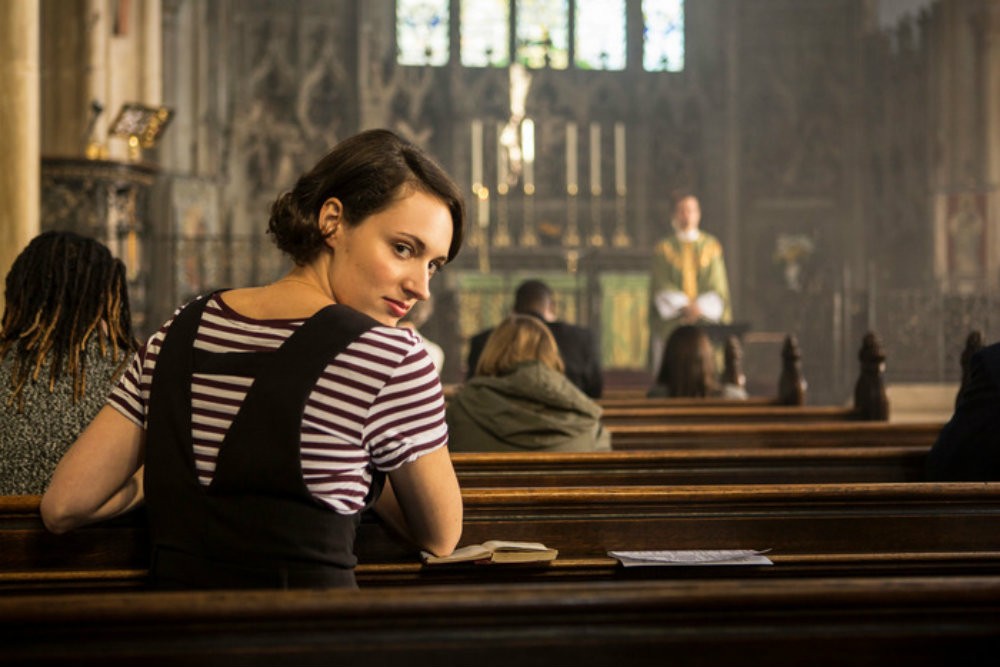 Season 2 of Phoebe Waller-Bridge’s acclaimed dark comedy Fleabag is charming and emotionally devastating, possibly more so than its first season. The British series follows a complicated and damaged woman as she deals with an emotionally distant father, a successful but miserable sister in an unhappy marriage, a pointless on-and-off relationship with a spineless beta male, and various empty flings, all while saddled with the failing guinea-pig themed cafe she opened with her deceased best friend. But perhaps the most powerful aspect of the acclaimed Amazon Prime series is its depiction of unprocessed grief and the ways in which it can manifest itself in all aspects of one’s life, often times fucking it up substantially.

Repressed trauma can present itself in a number of ways. Some people compartmentalize their lives, and keep friends and lovers at an emotional distance. Others drink or use drugs in an attempt to dull uncomfortable emotions, or find ways to re-live their pain repeatedly through other destructive behaviors. Phoebe Waller-Bridge’s titular protagonist Fleabag is an expert in this kind of self-sabotage; after all, she’s been repressing the pain of her mother’s death for years, along with the more recent passing of her best friend and co-cafe owner Boo (Jenny Rainsford). She acts out by stealing sculptures from her dad’s girlfriend, who is also her godmother (the wonderful Olivia Colman) and periodically breaking up with her live-in boyfriend Harry (Hugh Skinner) so she can sleep with other guys.

By the beginning of the show’s second season, Fleabag has proven herself to be capable of both consistently finding ways to make her own life worse, but also of ruining the lives of the people who care about her the most. The most shocking reveal of the first season comes when Boo accidentally kills herself while distraught over her boyfriend sleeping with someone else. That someone, of course, was Fleabag, but Boo never lived long enough to discover the betrayal, leaving Fleabag behind to fester in her own shame.

Heading into Season 2, Fleabag’s guilt over Boo is still there, but less intrusive, with fewer flashbacks of the two of them together compared to Season 1. In what is likely the show’s final run of episodes, Waller-Bridge sets Fleabag up to deal with her root problem: the unresolved grief over the death of her mother and her subsequent hatred of her soon to be stepmother. Of course, she’s still chasing doomed relationships, and in this season, she pursues the gold standard in unavailable partners — a man who is already married to God.

On one hand, it’s nice to see Fleabag open up to a potential romantic partner. Unfortunately, the object of her attentions is the alcoholic priest (Andrew Scott) that’s going to officiate the marriage of her widowed father (Bill Paterson) and her passive-aggressive godmother, who swooped in before Fleabag’s mom’s coffin was even lowered into the ground.

It’s easy to see why Fleabag is attracted to Scott’s character. In addition to being an easy man to look at, the priest has a playful and slightly dangerous way about him that is not normally associated with men of the cloth. For starters, he uses the word “fuck” like a verbal comma, and he’s never met a “G & T” (gin and tonic) he didn’t like. He’s funny and kind, and as part of his job, he’s obligated to listen to and counsel people saddled with trauma, but like Fleabag, there’s a nebulous darkness boiling under the surface. As such, he’s clever and quick-witted, acting as a formidable verbal sparring partner while the two dive into a wine bottle and debate things like whether God exists. He is, in some ways, Fleabag’s perfect man—despite the fact that she’s an atheist, and he took a vow of celibacy upon becoming a priest. In Fleabag’s mind, the priest is attractive because he’s unattainable; therefore, she (wrongly) assumes that he could never break her heart.

With the hot priest, we see Fleabag experience real intimacy with a prospective suitor for the first time. Waller-Bridge demonstrates this by making him the only person in the entire series who can actually see Fleabag breaking the fourth wall to address the audience directly, a device the show has used from the beginning. Her ability to briefly remove herself from situations and deflect the unpleasantness or awkwardness of any given scenario with humor was one of the main weapons in her self-protective arsenal, and the priest neutralizes it. When Fleabag looks away towards the camera, he is startled and wants to know where she went. “It’s like you disappear,” he observes. We know that Fleabag is finally becoming more at ease with intimacy when she bats the camera away while having sex with the priest. It’s one of the rare and fleeting moments in the series where Fleabag commits to being entirely present in her own life.

During the heart-wrenching series finale, Fleabag and the priest are forced to deal with the consequences of their hookup. For Fleabag, that means confessing her forbidden love to the clergyman during a tearful scene at a rainy bus stop. He, in turn, recommits to the priesthood despite having fallen in love with her. It’s not the outcome Fleabag had hoped for, but it forces her to experience the pain of offering the most honest, complete version of herself and ultimately being rejected. It’s the kind of hurt she has shielded herself from experiencing since the death of her mother, preemptively rejecting people by keeping them at arm’s reach. Throughout the show, her grief has manifested itself in toxic behavior that threatened to destroy relationships throughout her life. By finally allowing herself to be vulnerable and experience rejection, Fleabag leaves behind the crutch of her self-destructive habits–and, in an emotional final shot, the audience’s window into her psyche–and walks off into the rest of her life, ready to live it as a more fully realized, complete person.