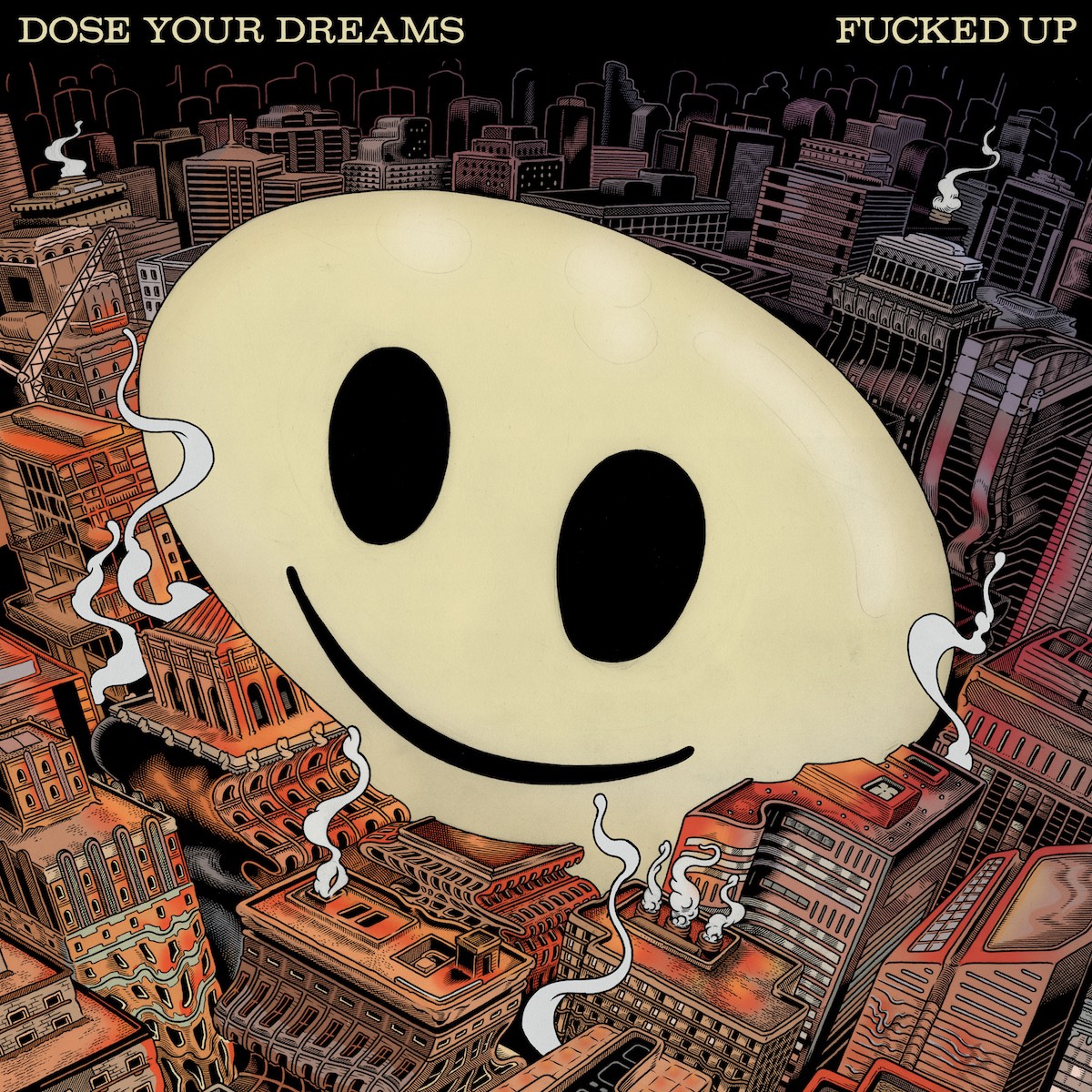 In their modern era, the mark of a dynamic Fucked Up record could be its ability to evoke confusion: What is going on? But mostly, how did they do that? A penchant for melodicism (2008’s The Chemistry of Common Life) combined with an insatiable curiosity for storytelling (2011’s David Comes to Life) and a consistency driven by frontman Damian Abraham’s distinctive bellow (in everything, but particularly necessary on their most accessible album, 2014’s Glass Boys) has made the Toronto band unmistakable.

Dose Your Dreams, Fucked Up’s ambitious fifth full-length album and first in four years, is a true maximalist’s utopia, confounding as much as it delights. The double LP, which runs nearly one and a half hours, confirms that Fucked Up are bigger than the confines of punk purism, yet driven by the spirit. (Nebular experimenters, or prog rockers, has a more honest ring to it.) And though this particular record is at times overwhelming, the listener’s instruction is right there in the title: consider the concept, ponder the potential, dive the fuck in, it’s a long ride.

Longtime fans will be unsurprised to find that Dose Your Dreams is a concept album following David, the protagonist of David Comes to Life. Depressed by the mundanity of a 9-to-5 office gig, he encounters a mystic named Joyce Tops and embarks on a personal odyssey, one that’s complicated when David learns of Joyce’s lover, Lloyd, who became lost on his own spiritual excursion. Without access to lyrics the nuance of the journey is impenetrable, but the opera is there—a hodge-podge of psych-y rock songs, eclectic electronic interludes and puissant punk that celebrates mysticism without deviating from the transparent, traditional hardcore message of rejecting what oppresses you. (On “I Don’t Wanna Live in This World Anymore,” Abraham opens with, “I don’t wanna live in this fucking world for one minute more.”)

Some veteran punk groups transform their sound to exit the pit as they become further removed from the physically demanding, youth-centric genre. Fucked Up, however, is both resilient and shape-shifting. Dose Your Dreams is an exercise in excess, intentionally impossible to replicate, beginning with the laundry list of collaborators: saxophonist Jane Fair, Final Fantasy’s Owen Pallett, Dinosaur Jr.’s J Mascis, violinist Yoobin Ahn, singer-songwriter Miya Folick, and many others. The layering of voices is nothing new in their repertoire—who could forget the Fucked Up x Nelly Furtado x James Murphy x Davey Havok Christmas single of 2007—but here, surplus is the name of the game. Dose attempts to go everywhere and do everything.

Opener “None of Your Business Man” is classic Abraham ascendancy (and the perfect anthem to quit your job to). “Torch to Light” introduces the double LP’s first moment of psychedelia, a new-ish venture for the band that’s sprinkled throughout. Mascis’s contribution on “Came Down Wrong” is, unsurprisingly, fuzzy, lackadaisical indie rock. “Dose Your Dreams” is disco. “Two I’s Closed” is a Beatles ballad. “The One I Want Will Come for Me” recalls shoegaze-y Cure. The spastic “Mechanical Bull” borders on industrial (Ryan Tong of the fantastic Toronto hardcore band S.H.I.T. sings), bleeding into “Accelerate,” the hardest moment on the album—deliciously familiar Fucked Up indignation that still challenges expectation with Nine Inch Nails-esque percussion and metallic psych riffs.

The most immediate change is Abraham’s withdrawn vocality, a byproduct of guitarist Mike Haliechuk and drummer Jonah Falco’s dominance in the recording process. He’s not all over the record, defining the band’s sound has he has in the past. There may well be a reason: Abraham has said publicly that his role is not what it once was, all but foreshadowing a departure. If that’s an indication that Dose Your Dreams could be Fucked Up’s final album, or one nearish the end, at least they’re concluding with something colossal.