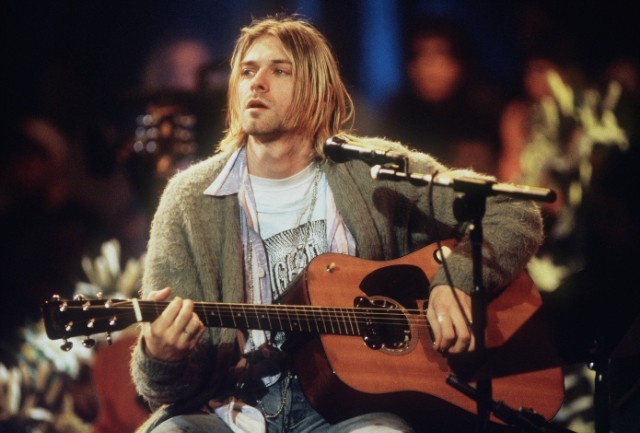 Perhaps you’ve seen it in your social media feeds this week. A quote, attributed to Kurt Cobain, that eerily predicts and approves of the prospect of a Donald Trump presidency. Versions of the quote have been circulating online since at least 2016, but it reached new critical mass with a tweet from a pro-Trump account this week:

In the end I believe my generation will surprise everyone. We already know that both political parties are playing both sides from the middle and we’ll elect a true outsider when we fully mature. I wouldn’t be surprised if it’s a business tycoon who can’t be bought and who does what’s right for the people. Someone like Donald Trump as crazy as that sounds.

This quote is obviously fake. How obvious? It sometimes appears as an image macro, with the text overlaid on an image of the late Nirvana playing an acoustic guitar. In that form, it is attributed to “Curt Cobain.” No one who shares the quote on social media ever seems to have a source for it—the most specific it gets is that Kurt supposedly said it sometime in 1993. Finally, one of Cobain’s most widely known political beliefs was his opposition to things like business tycoons. Famously, when he appeared on the cover of Rolling Stone, he wore a t-shirt that read “Corporate Magazines Still Suck.”

According to Snopes, which debunked the fake Cobain quote earlier this year, it first appeared in the “Curt Cobain” image macro form on a Facebook page called Trump Train on July 30, 2016. Trump Train, as you might guess, is not exactly a reliable source of news. Recent posts from the same page also include an article claiming CNN White House correspondent Jim Acosta is planning on going commando to the next press briefing because he’s afraid Sarah Huckabee Sanders is going to give him a wedgie.

If you Google the Cobain quote and limit your search to pages published before Trump announced his presidential candidacy, you get no results, strongly suggesting it is fabricated. It’s unclear exactly how it was popularized after the appearance on the Trump Train page, but we can assume it went the usual way: shared across social media pages and in chain emails, without anything resembling context or attribution, until it reached a saturation point. The fact that the seemingly original specimen contains an obvious misspelling of Cobain’s first name suggests one possible origin story: Maybe it was somebody’s idea of a joke, not intended to be taken seriously even by the person who made it. Whoops!