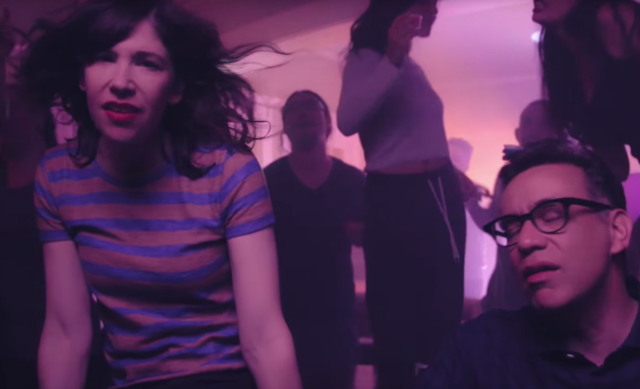 Carrie Brownstein and Fred Armisen’s sketch show Portlandia has almost reached its conclusion. With the show first airing back in 2011, the duo have spent the ensuing seven years cranking out oddball humor that often skewered “hipster culture,” interacted with the indie luminaries of the day, and generally did a good job of capturing the absurdities of contemporary life. The series finale airs next week, and ahead of tomorrow’s penultimate episode, they’ve shared a new song from the show. It’s called “Let’s Give Up!” and it is very much of a piece with Portlandia’s traditional tone.

The track is a sardonic paean to embracing apathy, sung by Brownstein over chintzy, sugary pop music. The video opens on a disconcerted Brownstein making her way through the morning’s onslaught of awful headlines as the radio offers “The Top 25 Reasons To Be Outraged This Week,” when a chipper Armisen enters and encourages her to explore the weightless and blissful experience of letting go and deciding not to care about the state of the world. That is, of course, a feeling that’s pretty relatable these days! The song flips through a series of major topics like global warming and trying to tune out the news, before taking on the numbing convenience of social media and binge-watching TV and then giving way to a mock-dramatic spoken word passage from Armisen.

In prime Portlandia fashion, “Let’s Give Up!” seems to aim its barbs inwards as much as outwards, undercutting a few things at once. The message, however, is naturally tongue-in-cheek. Ironically enough, it arrives on a day where that impulse to look at everything going on in this country and just say “Fuck it, we’re doomed” is juxtaposed against the inspiring image of a nationwide protest held by kids walking out from school, a fitting counterpoint to the song’s performative despondence. Check out the video below.