Review: Mount Eerie’s Heartrending Now Only Is a Beautiful Reflection on Grief

Almost a year since its release, A Crow Looked at Me remains a singular crucible. Bluntly diaristic and relatively artless, Phil Elverum’s requiem for the late Geneviève Castrée–an illustrator, fellow musician, and his partner, who died of cancer in 2016–sought to strip away any supposedly valiant romance one might want to affix to the ineffable act of mourning. The rest was numbness, stunned desolation, some light magical thinking and the detritus of a life suddenly cut short.

Less deadpan and more florid than its predecessor, Now Only is heartrending in new, different ways. Sonically, the record doesn’t stray far from Mount Eerie’s elemental standard operating procedures, where meandering, nylon-strung acoustic strum or heavy metal thunder underlie Elverum’s streams of consciousness. On Crow, this backdrop was skeletal; on this record, it’s cannier, more self-conscious. Now Only’s opening verse and direct invocation of the subject Crow never named directly–“I sing to you, I sing to you, Geneviève/I sing to you, you don’t exist”–conveys an growing distance, a weary reach. Elverum’s grieving here is philosophical, self-aware, and achingly specific; despair yielding to an excruciating uncertainty.

Stung by power-chord plunges and soothed by keyboard balms that mirror some of these extremes, “Earth” trembles mightily; his tendency to “talk about you all the time, including the last day that you were alive” clashing with the reality that she won’t get to see their daughter grow up, and is really, truly gone. “Compost and memories/And nothing else,” he murmurs, resignedly. The flickering “Distortion” feels confessional, a searching, self-mythological hybrid between late-night bursts of clarity and those hungry confidences young people exchange in bonhomie. On the gently rambling “Tintin in Tibet,” Elverum time-travels back to the day he and Castrée met, recalling their courtship in vivid, cinematic detail before fast-forwarding 13 years to her deathbed, where her final thoughts are of those early days too. Echoes of Castrée are all around, in “this dancing child,” in the art and photographs crowding Now Only’s cover, even as she herself is nowhere.

As with “Soria Moira” from Crow, Elverum finds solace in and is sustained by “Two Paintings by Nicolai Astrup.” His recordings as Mount Eerie, and before as the Microphones, have celebrated nature’s violence, immensity, and beauty; that nature might offer meditation and perspective seems fitting, even as viewed through the prisms of art. 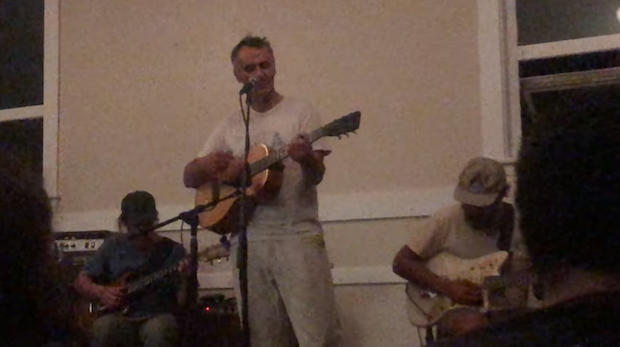 Yet commerce colors Now Only’s harshest blow. If the title track’s folk-rock chorus sounds earnestly callous, the hypertext-embedded verses remind us that this suffering is, for better or worse, a product. “And the next thing I knew,” Elverum gushes, “I was standing in the dirt/Under the desert sky at night outside Phoenix/At a music festival that had paid to fly me in/To play death songs to a bunch of young people on drugs.” He knows well what he’s doing; he’s implicating himself and, by association, everyone who might buy a ticket to hear him sing this very song, or to sing it back to him.