Review: Liam Gallagher Is More Bark Than Bite on As You Were

Home » New Music » Reviews » Review: Liam Gallagher Is More Bark Than Bite on As You Were

Intentional or not, it was a little suggestive for Liam Gallagher to release his first ever solo album in the same week Oasis’ landmark album (What’s the Story) Morning Glory celebrated its 22nd birthday. Even the most dedicated fans of Britrock’s preeminent feuding brothers acknowledged long ago that they won’t again touch their all-time anthemic heights. And yet lately Liam, 45, feels more ubiquitous than ever. In the past year, he became more famous for withering madcap insults (potato!) than for singing rock songs, attention that drove him to remind us he was still a rock singer. By his own admission, the purpose of making As You Were was to keep him occupied, “rather than sitting at home doing nothing, spouting off on Twitter.”

The final result is an agreeable enough listen, if not as proper fuckin’ mega as its creator would probably like you to think. Having finally decided to own up to his limited songwriting abilities, Gallagher enlisted help, most significantly from pop writer/producer Greg Kurstin and Andrew Wyatt of Miike Snow. (Had Noel been the one to hire Adele’s producer you can bet Liam would’ve never let him live it down, though in a year when Kurstin worked with Foo Fighters and Mark Ronson with Queens of the Stone Age, it hardly seems anomalous.) Whether because of the level or the quantity of professionalism, the sound comes through so clean it begins to feel a little stale.

Contrary to popular belief, Gallagher can write a whole song. “Greedy Soul” is the best of the five tracks registered in his name alone, but unsurprisingly he’s better off with help. “Wall of Glass,” a team effort, is the only song to successfully reverse-engineering both halves of Oasis’ magic: brash melodic staying power and brilliantly inane lyrical essence. “And the stone you throw / Will turn back in its path” doesn’t defy gravity and momentum quite the same way as, “Slowly walking down the hall / Faster than a cannonball,” but the suggestion is there. The pros came up with “Chinatown,” a song that manages to be genuinely cryptic without breaking character, and “Paper Crown,” the sort of faithful midtempo Beatles homage that was the bread, butter, and cheese of old Oasis albums. Of course, the greatest favor Gallagher’s co-writers did him was to accommodate his current vocal range—though he dutifully plays the hits when performing live, they sound a lot more ragged than they used to.

As You Were runs into trouble where it begins to resemble the give-me-one-of-everything pastiche that beset Beady Eye, the group Liam formed with his remaining bandmates after a 2009 falling-out with Noel torpedoed Oasis. The repetitive, top-heavy “I Get By”—a song that rhymes “helter skelter” with “gimme shelter”—is all bark and no bite. Without an equally ego-driven guitarist to offset him, Liam’s vocals take constant precedence. “When I’m in Need” turns to an extended instrumental only when it can’t possibly sustain another chorus. 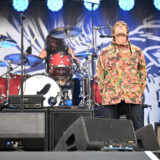 The standard album runs 12 songs, but unless you’re listening on vinyl, you’re more likely to encounter the 15-track deluxe edition. It’s apparent why the final songs were cut: “Doesn’t Have to Be That Way” feels like a rough Tame Impala demo, while on “I Never Wanna Be Like You,” Gallager croons, “God squad, peace thought / Supermoons / Fanboys, make noise / Boogaloo,” a string of nonsense presumably harvested from a spam email. At least it doesn’t get worse than a gripe about selfie-takers on “All My People / All Mankind,” a weak ditty whose grandiose title and orchestral arrangement render it kind of pathetic.

It’s tempting to imagine how this album might have been improved, either with a keener eye to rock radio or even just some heavier distortion to blur the boring parts. But isn’t that beside the point? As You Were is a vehicle with which to perpetuate capital-LG Liam Gallagher as he ages, John Lydon-like, into his legacy. Imagine if he’d tried to drop the rock star posture and revive himself as a serious, “adult” singer-songwriter type—unbearable. This is the Liam Gallagher you remember, still willfully pilfering lines and chord progressions, still publicly taking shots at his brother, still closing sets with “Wonderwall.” The only real shock is that, in 2017, I’m not convinced Noel can do better.