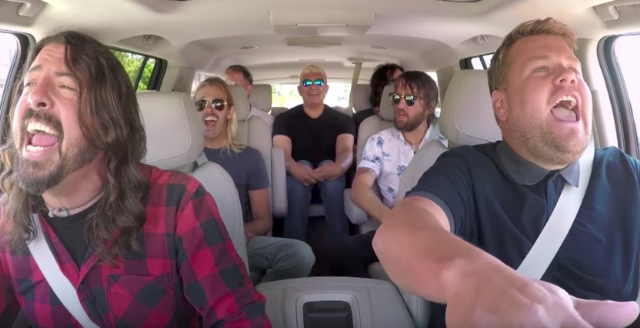 All six current Foo Fighters recently appeared on an episode of Carpool Karaoke, the claustrophobic celebrity viral content generator James Corden pretends to drive to work. The final cut was only 13 minutes long, but the video shoot sounds like it was considerably more arduous. Foo Fighters’ Pat Smear talked to NME about it, and you get the sense he was putting it gently: “By hour three in dude’s car it got less fun. It kinda went on. When we stopped at Guitar Center, that felt like we were done, but it was like ‘this is halfway.'”

Dave Grohl apparently said the experience was “a little uncomfortable,” and that he’d wished the show had used footage of the band karaoke-ing Rick Astley and the Ramones, instead of just their own songs. According to Grohl, Corden is “definitely is [a music lover],” which is a strange thing to say about the guy who brought us Foo Fighters covering “Never Gonna Give You Up” at a Guitar Center. Revisit this valuable cultural artifact below.