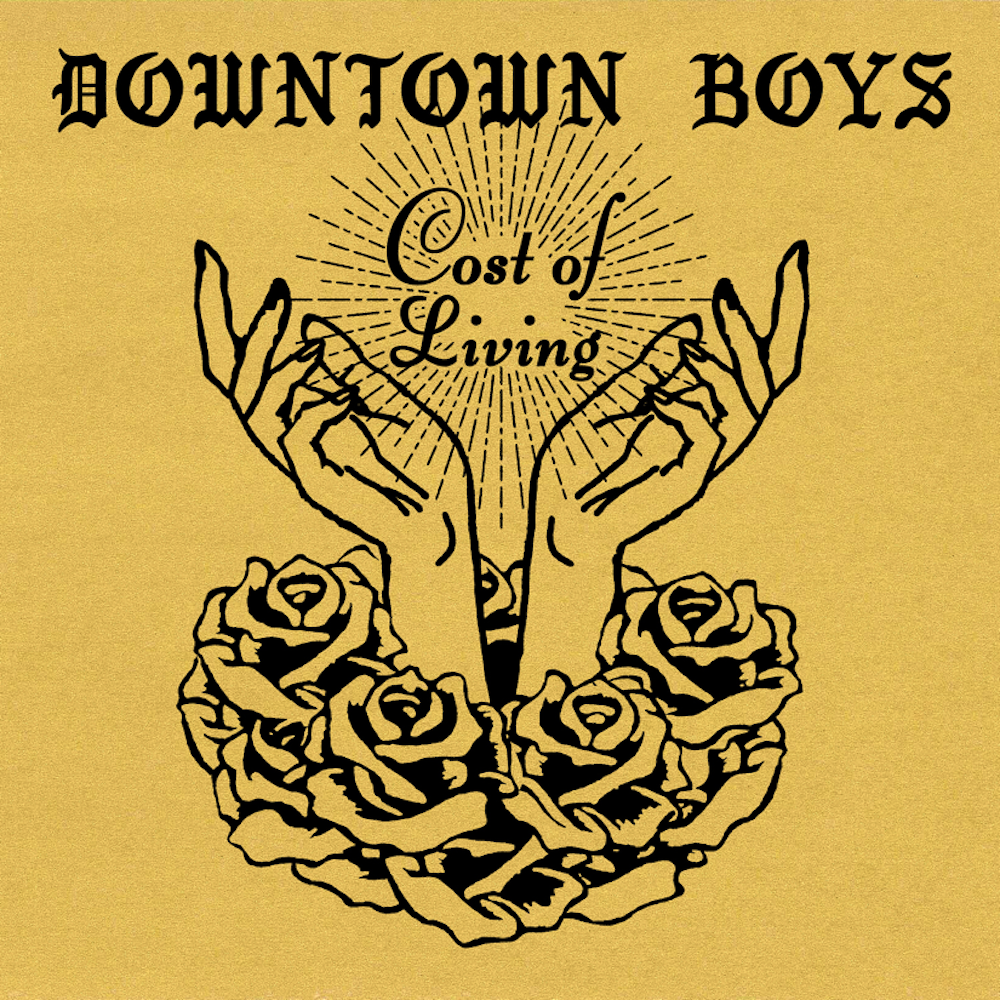 Downtown Boys’ second album, which propelled them from the DIY spaces of their Providence hometown into the consciousness of punkish and politically-minded music fans across the country, was called Full Communism. With a name like that, it was hard to view the music within as anything but a delivery system for ideas. And though that record was full of fiery moments–“Santa,” with its New Orleans funeral horn intro and breakneck Bad Brains thrash, is a minor classic–the ensuing popular narrative about the band was dominated by its identity as an ensemble of people of color, fronted by a bilingual woman, in a landscape of white men, and its proud advocacy for socialist and progressive politics at a time when many young people were beginning to look to the left for leadership and inspiration.

Cost of Living, the follow-up, is a great leap forward–please excuse the shitty communism pun–in nearly every respect. “A Wall,” the album opener, is easily the best song in Downtown Boys’ catalog, and one of the most electrifying rock’n’roll tracks in recent memory by any band. It opens with a snare crack like the first gunshot of a war, then a chugging one-note bassline that you can feel in your chest, then the pleasant surprise of a lilting saxophone arrangement. “How much is enough?” lead shouter Victoria Ruiz demands, a forceful first line for a record that’s largely concerned with the labor of oppressed people, imposed on them by the ruling class and willfully ignored by the petit bourgeoisie. There’s an edge to her voice that hints at the other side of the album’s coin: at some point, enough is enough, and the oppressed will fight back.

Early this year, Current Affairs published an essay entitled “For a Luxury Leftism,” which argued, with tongue half in cheek, that any good revolution should be both proletarian in its principles and rip-roaring fun in its aesthetic pursuits. “A Wall” achieves transcendence on similar grounds: for all its righteous fury, it’s more singalong than sermon, more party than Party. Like all great political art, its message is both pointed and mutable. The wall of the title ostensibly refers to Donald Trump’s plan for a barrier on the border between the U.S. and Mexico, but as I’ve noted previously, the subtly effective choice of the indefinite article to introduce the subject in the title and lyrics lends “A Wall” the feeling of universal struggle. Trump’s wall is just a wall: one of many, literal and figurative, that have existed since long before he came around and will go on existing after he’s gone.

Cost of Living will likely be remembered as a document of its time. (The exhortation to “stay beyond woke” in the spoken word outro, among other things, will make sure of that.) However, Downtown Boys have done an admirable job of placing the specifics of their messages within the context of history, and infusing the record with a rich new musicality. They enlisted the help of producer Guy Picciotto, an ideal choice to shepherd this sort of record to completion. As a member of Fugazi, he contributed to some of the most inventive records ever to be tagged as punk rock, without ever straying from the band’s fiercely compassionate ideological roots. Downtown Boys’ songwriting approach is much more straightforward than Fugazi’s, favoring galloping power chords over heady polyrhythm, but they nonetheless have packed their taut and impassioned new album with rewarding details.

Cost of Living’s first half contains one sneakily sophisticated barnburner after another. Following “A Wall,” there’s “I Am Enough (I Want More),” which burnishes its wiry guitar leads with mournful piano and barrels into a cascading coda recalling that of the Replacements’ classic “Bastards of Young.” Shortly after that, there’s “Promissory Note,” featuring some of the album’s most bitterly resonant lyrics set against its most poppy and approachable chord progression. “I won’t light myself on fire to keep you warm,” Ruiz sings, perhaps indicting surface-level progressivism that doesn’t participate in real resistance, but takes comfort knowing that other less privileged people do. “I won’t carry you up that hill,” she continues as Joe DeGeorge’s saxophone and Mary Regalado’s bass merrily windmill behind her. “I don’t care if you cry.” Several of the album’s most stirring moments, including this one, arise from vocal interplay between Ruiz and guitarist Joey La Neve DeFrancesco, who provides an appealing staccato foil to her authoritative snarl.

Ruiz essentially relies on a single style of vocalizing, though she employs an impressive variety of tics and cadences within it. She delivers every line like it’s a matter of life or death, and while this approach fits the urgency of the material, it also tends to make the songs wear together by the end of the album. Cost of Living outpaces its predecessor in large because of Downtown Boys’ newfound mastery of dynamics in their performances: DeFrancesco’s shimmering layers of guitar in the interlude “Heroes;” Regalado’s calm and assured walking bassline on the otherwise bombastic “Clara.” It would be a treat to hear them explore this understated side of their songwriting even more.

The latter track, the album’s final proper song, is one of its heaviest and most thrilling, grabbing you by the shoulders and shaking you out of whatever state of partial attention into you may have lapsed into over the preceding minutes. Ruiz is fully in control of the clamor, fervently spouting aphorisms in both English and Spanish, with fireworks and heavy artillery exploding on all sides. When Downtown Boys play like this, they are undeniable. It helps orient the ear when they dial back the volume occasionally, but you can’t really blame them for wanting to max it out.