By this time next month, one thousand publications will have run one thousand more articles reiterating what a chill, happy, generally gnarly dude Mac DeMarco is. Over the last few years, DeMarco’s success has been abetted by his loosey-goosey character and appetite for activity, strengths in an era where artists show less personality than ever, and where websites are always in need of material to fuel traffic. So Mac will cover Limp Bizkit in concert, eat hot wings on camera, get interviewed by his mom, troll his bandmates with a billboard–all of these experiences fun, engaging, and above all, consumable.

Perhaps this omnipresence seems excessive. But the irony of this innately viral persona is the innately thoughtful quality of his music, which largely rejects the infuriating cliche of a happy, chill (and white, and straight) guy just having a good time without you being a bummer about it. DeMarco is not Magic!, insisting on a path of least resistance—along with your unquestioning consumption of the music, of course—in a complicated world. This Old Dog, his latest, is primarily concerned with aging and real-deal maturity, not necessarily the expected subject material from a man once filmed putting a drumstick up his asshole. But it’s always been that way: A song like “Rock and Roll Night Club” was a nice gag, but his calling cards were heart-on-sleeve, starry night ballads like “Ode to Viceroy” and “Still Together.”

The content comes with a slight change in sound: Gone is the rinky-dink, pealing electric guitar tone that colored his early records, replaced with an acoustic instrument, recorded as if he’s in the room with you. There’s also prolific use of a CR-78 drum machine set to cruise, the steady motorik rhythms pushing him toward a more reflective space. He sounds comfortable, lived-in. The turned-down mood is a natural extension of his theoretically “chill” ethos; if those earlier records were music for summer barbecues, this one is for the post-sunset denouement, when the party has withered away to the last few people, content to sit around the dying fire and talk about the serious things, probably while very drunk.

You get a feel for this vibe at the start of “This Old Dog,” which begins at an already languid tempo before immediately slowing down, his voice going resin-thick as he sings about appreciating the life he’s lived. If a 26-year-old referring to himself as an “old dog” seems precious, remember Neil Young was just 24—and so much more—when he dropped the heartbreaking “Old Man,” a song about imagining your whole life going by while feeling unsatisfied, a mood Mac is eager to avoid. He’s playing more with synthesizers, too, and dusky textures fog up songs like “On the Level” and the heartsick “For the First Time.” On the latter, he sings about reuniting with his girlfriend after a long absence, an optimistic flutter in his voice: “I’m not trying to forget her / Just understand how I’ll be feeling / On that day / It’s just like seeing her for the first time again.” 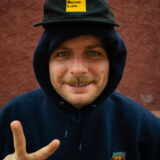 With maturity comes more room for self-doubt, as Mac sings about living for the moment, and thinking about what’s already gone wrong. His voice wavers throughout the album, usually when expressing a particularly fragile sentiment, as on “Dreams From Yesterday” when he softly tells himself there’s no one else to blame for his failed hopes. A pair of songs serve as bittersweet codas for previous songs: “One Another” flips “Another One,” in which he obsessed about whether a woman was involved with another man, into a jaunty little number about realizing something good might come from a breakup. Likewise “Still Beating” follows “Still Together,” one of the more romantic songs in his collection, which typically closes his sets. The sequel is sung from the perspective of Mac the star, as he realizes his art and behavior might have pushed his girlfriend away. “I never meant to sing my tune for anybody else out there but you,” he sings, before reassuring her his feelings are still strong. As he admits to crying over it, his voice cracks.

If it seems weird to give away a personal love letter to an audience of thousands, remember that accessibility is always a tricky thing for artists to manage. Mac famously invited fans to come visit him at his house in Rockaway, expecting nobody to show up; when dozens eventually did, he later remarked “I don’t know what I was thinking.” (He now lives in California, and his address is concealed.) But if his music has always felt mature and relaxed, despite his joker antics—a Real Estate sound inside a Father John Misty brain—the recognition that he’s famous in his way, which comes with a different set of expectations and pressures, invites a new set of concerns in his music. As the Byrds might’ve put it: So, you want to be an indie rock n’ roll star?

Mac has spoken openly about his nearly non-existent relationship with his father, who became gravely ill during the recording of This Old Dog. The album’s closer, “Watching Him Fade Away,” explicitly grapples with the strange feeling of not knowing how to tell someone they mean a lot, even though they really don’t. “The thought of him not being around / Well, sure it would be sad, but not really different,” Mac sings over an unadorned piano arrangement. Mac’s father has since recovered, turning the song into a time capsule of his complicated feelings. “I didn’t think he was going to hear these songs, regardless of everyone else hearing it,” he told Noisey. A reconciliation seems possible.

The closing sentiment ends up sharpening “My Old Man,” which introduces the album with a sparse drum pattern and a gentle, hypnotic acoustic guitar. Mac sings about the worry that he’s becoming more like his father, a man who he never really knew. The idea that everyone turns into their mother or father is well-worn, but it’s particularly confusing when that parent is absent or dead, and the qualities you’re recognizing aren’t so positive. “Look how old and cold and tired and lonely he’s become,” he sings, while looking at himself in a mirror.

To point out your bad qualities without doing anything about them is a classic sign that someone isn’t really taking responsibility, as adults do. But to ascribe your failures to someone as noticeably absent as a father—especially one whose own lack of adulthood has largely shaped your character, for better and worse—is heavy stuff, and makes for some of the most affecting writing of Mac’s career. This Old Dog is going to make for a weird addition to his festival set, but it’s some of his best music yet—a reminder that casual people are capable of moving forward, instead of sticking in the same place. And if he sticks another drumstick up his ass—well, that’s part of life too.