Perfume Genius has released a second song from his forthcoming album No Shape called “Go Ahead.” The artist premiered the song during a Twitter Q+A. Listen to it below.

No Shape is out May 12th. Perfume Genius has also added performances in Europe to a previously announced tour this summer. Check out the extended dates below, as well. 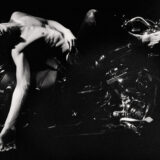