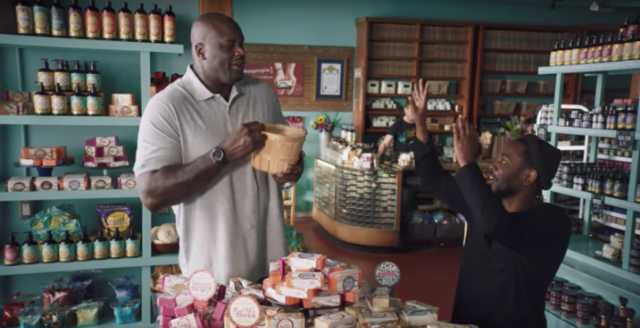 There are many albums a music fan might turn to for solace in the wake of the results of the American presidential election; a logical contemporary choice might be Kendrick Lamar’s sprawling sociopolitically-charged screed To Pimp a Butterfly from 2014. LeBron James, most notably, responded to the news of Trump’s victory with an Instagram post featuring Kendrick’s “Alright.”

Kendrick himself has never embraced the role of social media spokesperson, and is decidedly inactive on his accounts. He has not yet spoken out in the wake of the election in a live format either, as did his label mate Schoolboy Q.

But American Express decided to do it for him: Today, they unveiled the rapper’s new set of commercials for the credit card company, co-starring Shaquille O’Neal. The concept for all of them: Shaq and Kendrick…sniff bars of scented soap together and quip ephemerally while a sitar ironically drones in the background. Kendrick tries to make a basket by throwing bars at a basket Shaq is holding. Thank you, AmEx.

Musicians, increasingly, need to take money where they can get it these days. But boy–if you’re an American who feels like nothing matters right now these bizarre YouTube vids will not help repair your thinking.

Could they have once been charming? Unclear. It’s a brave new world now.