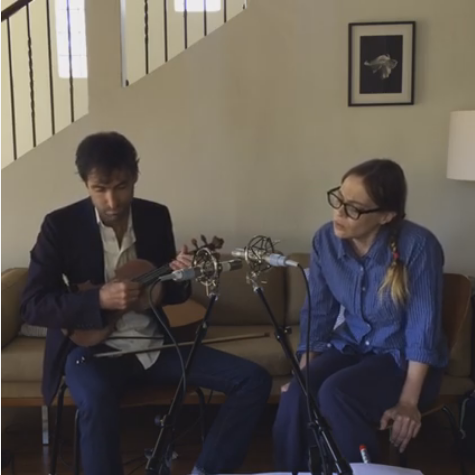 Singer-songwriter and violin aficionado Andrew Bird occasionally hosts a series of short web shows called Live From The Great Room, where he brings various artists into a living room to play a few songs and chit-chat. Previous guests have been Jim James and Blake Mills, and his latest episode features his recent “Left-Handed Kisses” collaborator Fiona Apple.

During yesterday’s show, the two played Apple’s “Werewolf,” Bird’s “Why?” and a song called “Railroad Sam and Slingshot Sue” that he co-wrote with a five-year-old boy named Sam. They also cover the popular folk song “(I’d Like to Get You on a) Slow Boat to China” and Bob Dylan’s “Oh Sister.”

The two of them have a pretty funny dynamic given that they seem like polar opposites. Watch the duo below.