Review: Open Mike Eagle and Paul White Get Up Close and Well, You Know, on ‘Hella Personal Film Festival’ 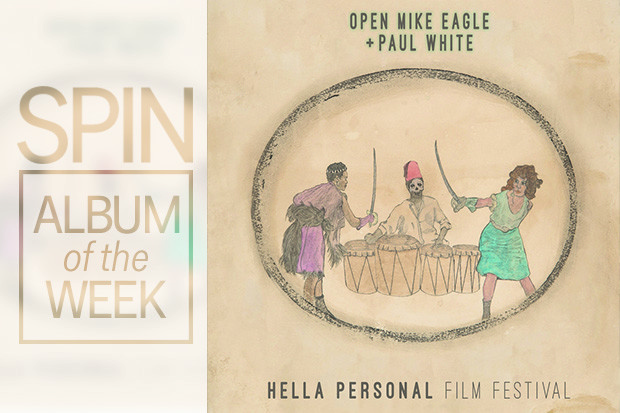 If the late, lamented revolutionary poet Gil Scott-Heron was a college-bound poet today, he might be writing raps in the vein of Open Mike Eagle. The comparison isn’t so far-fetched; Eagle cuts through pop-culture tropes with a cutting wit and snarky, self-deprecating humor. He pairs satirical broadsides like last year’s self-explanatory “Celebrity Reduction Prayer” with painfully intimate revelations, just as Scott-Heron once shifted from ’60s pop send-ups like “The Revolution Will Not Be Televised” to anguished ballads like “The Prisoner.” His 2014 indie-rap breakthrough, Dark Comedy, certified him as a leader in hip-hop’s rising nerd class alongside Comedy Central star Hannibal Buress and fellow Chicago rapper Serengeti — the latter with whom he paired as Cavanaugh last year on the convoluted but interesting Time & Materials.

Open Mike Eagle’s momentum has raised anticipation for his fifth collaborative full-length (and ninth album altogether), Hella Personal Film Festival, this time made with British producer and vocalist Paul White. But he doesn’t quite scale up his political and personal concerns. Instead, he gives us more modest delights and continues to — as he puts it on “I Went Outside Today” — “go ‘head with my Dwayne Wayne lookin’ ass” as he spins stories about everyday neuroses. One track, optimistically titled “Insecurity,” finds Eagle trying to comfort himself while talking to a mirror, while White loops an analog synthesizer groove that bounces like a rubber ball. On the ominously titled “A Short About a Guy That Dies Every Night,” he imagines himself “being gunned down when it’s sundown” over White’s melancholy guitar licks.

For much of his career, Paul White has charted a trajectory similar to Koushik, Bibio, and other post-Boards of Canada producers that unfurl hazy vocals over faded-sunshine electronica. He has recently thrown some curveballs: “Never Die,” a symphonic soul highlight from his Golden Rules project with Florida rapper Eric Biddines, was one of last year’s best and most underrated singles. His work on Hella Personal Film Festival brings familiar beats like “Admitting the Endorphin Addiction,” which features a pleasant, breezy hook from Shawn Lee; and surprising detours like the percussive hand drums of “Protectors on the Heat,” which sounds like a homage to Los Angeles indie pioneer Freestyle Fellowship’s vintage choral chants. There’s also an appearance from veteran word-enjambment expert Aesop Rock on “I Went Outside Today,” and Hemlock Ernst (née Samuel T. Herring of Future Islands), who cracks wise on “Leave People Alone” about local TV news inanity: “Is someone masturbating in your sandwich at the local diner? You might not think so, but this horror-movie graphic might change your mind!”

Hella Personal Film Festival may find Open Mike Eagle and White delighting us modestly with their twee blues. But what of the sociopolitical edge that brought Dark Comedy into sharp focus? On the astounding centerpiece “Smiling (Quirky Race Doc),” the rapper sadly observes that nobody smiles at him before shows “because I’m a black man.” He’s just a dude that wants to meet and greet, but his audience is scared that staring at him wrong will turn him into the Incredible Angry Black Guy. “It’s all fine and dandy when the show starts / Before then I’m avoided like a ghost fart,” he harmonizes in his shaggy-dog voice as White speeds up a harmonica sample into sadly humorous chipmunk blues. So the next time you see Open Mike Eagle, give him a twinkling grin and a warm hug. Or maybe don’t — that’ll probably just make him nervous.