Though this winter’s been more mild in most parts of the world than any in recent memory, even global warming can’t thaw the crop of frigid metal releases that always surface in the year’s darkest months. From the time the leaves fall from the trees, the genre’s weirdos mobilize, unleashing a steady flow of works with the frostbiting power of liquid nitrogen, and this year’s been no exception. So here’s a rundown of a few of the most endearingly depressing records we’ve seen since the end of list season. You might want to kick on an extra UV lamp or two.

Krallice, Hyperion (Gilead Media)
Though apparently recorded two years prior to Ygg Huur, their 2015 exhibition of blunted blast beats and swift guitar knifework, the New Year’s Day release of Krallice’s Hyperion EP marked another subtle transformation for the Brooklyn quartet. Previously content to craft assemblages of nothing but jagged edges, they sand away the instrumental excess on this three-track, sub-30-minute release, so that even a ten-minute cavalcade of French-braided guitar workouts called “Assuming Memory” feels economical. Hyperion represents a new highpoint in sheer density for guitarists Mick Barr and Colin Marston’s six-stringed entanglement, but it doesn’t happen at the expense of the effusive torrents of energy that make the band so life-affirming in the first place. They’re adding more layers to an already complicated formula, but doing so with a sleight of hand. Other postmodern black-metal acts may push further into the genre’s uncharted realms, but Krallice’s great success is that the boundary-pushing in their forays is largely invisible. 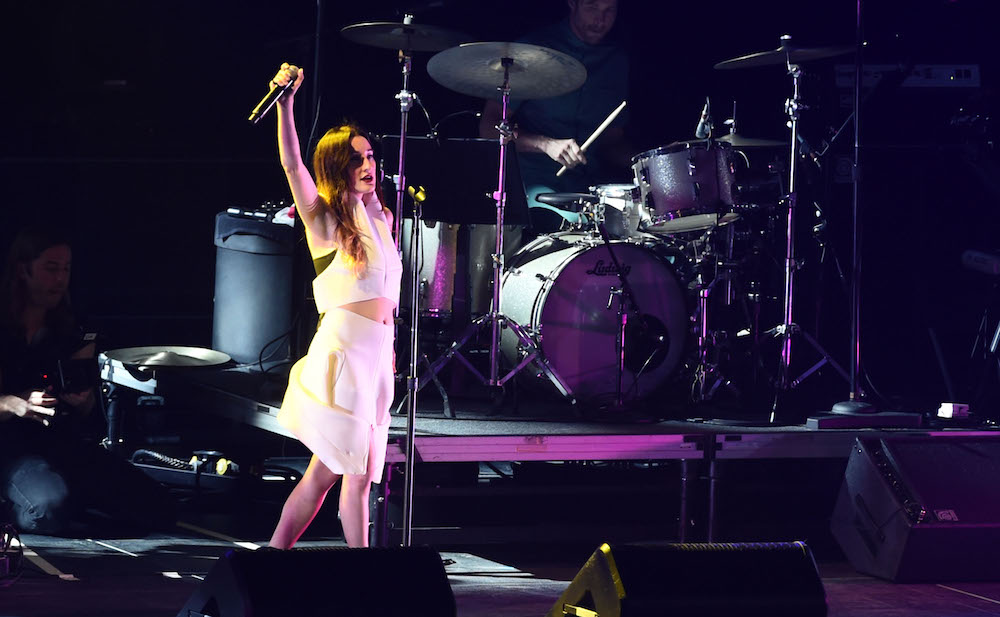 Lycus, Chasms (Relapse)
Oakland quartet Lycus make weighty compositions that are both dense and depressing enough to have them rightly described as a funeral-doom band, but something about that genre’s too graven to fully describe the heights (or depths, maybe) of latest full length Chasms. For 44 minutes — but only four tracks — they’re able to brew a sickly, bass-led series of drones and dissolved growls that coalesce into a relentless grime both more noxious and viscous than amniotic fluid. At marathon lengths, even the deliberate repetition and yogic yawns of the more curdled segments seem structured to aid meditation or contemplation. Dark as it may seem, the effect is centering — a sensory-deprivation soak in raw sewage.

Yellow Eyes, Sick With Bloom (Gilead Media)
Within a genre (black metal) and a city (New York) whose most famous practitioners prize reinvention, Sick With Bloom establishes Yellow Eyes as relative traditionalists. The record’s cover features ornate stained glass suggesting cathedral-like grandeur, the band’s members rarely do press, and the group have taken to appearing in photos only in silhouette. The music, heavy on blast beats and acid-stained vocals, should please purists, but Yellow Eyes still have an understanding of space and tension that feels innovative. They don’t telegraph grand ideals, but the contortions they display on “What Filters Through the Copper Stain” feel time-stopping anyway. It’s an album-length exposition of the powers of piety.

Abbath, Abbath (Season of Mist)
After two-and-a-half decades making bone-chilling black metal as the frontman for Norway’s iconic Immortal, the man born Olve Eikemo — known professionally as Abbath Doom Occulta, or, you know, just Abbath — decided it was time to have a little fun. So he launched a band under his own adopted mononym and started injecting a little bit of a thrashing groove into his instrumentals, an approach that culminated with a rendition of Judas Priest’s “Riding on the Wind” that’s as flailing and fun as the original, but slightly malformed. That cover reappears as a bonus cut on the band’s January debut, but fear not: The rest of the release takes a similar tact, folding classic thrash, horn stabs, and high kicks into Eikemo’s trademark black-metal mutations. Finally, there’s a bit of glee among the rage — warmth in Abbath’s lifelong winter.

Black Tusk, Pillars of Ash (Relapse)
If Black Tusk’s fifth full-length, Pillars of Ash, had never seen the light of day, everyone would have understood. During the making of the record back in 2014, bassist/singer Jonathan Athon died tragically from injuries he sustained during a motorcycle accident, leaving the Savannah sludge-slinging trio unbalanced, a stool whose third leg was suddenly lopped off. But because Athon’s parts were finished, the band’s other members, guitarist Andrew Fidler and drummer Jamie May, put the finishing touches on the album, an act of generosity and strength that’s mirrored in the record’s 11 tracks. As their friends in Baroness hewed closer and closer to radio-rock structures, these guys remained shrouded in a grinning darkness, and their final crushing recordings with Athon reflect a resoluteness even after tragedy. The sound isn’t funereal, but exultant, the slashing and stoned pinnacle of everything the trio had built to over the course of their decade of existence.

Wildernessking, Mystical Future (Sick Man Getting Sick)
The bands melding grandiose post-rock and brutalist black metal in the wake of “Dream House” are legion, but South Africa’s Wildernessking stand out because they aren’t afraid to get a little weird. Interspersed with passages of tremolo-picked bliss are proggy, circus-freak guitar lines that even Deafheaven‘s genre-agnostic New Bermuda wouldn’t have attempted. The more rhythmically muddled segments of “With Arms Like Wands” feel particularly inventive, a studio rat’s addled rejection of black-metal dogma in favor of propulsion and elevation. Part of the record was made at what vocalist Keenan Nathan Oakes describes as a “scenic, seaside” studio and you can hear that in parts. But the rest sounds as if it were recorded somewhere dimmer and more perplexing — a post-rock pretzel logic from the more labyrinthine parts of their own psyches.