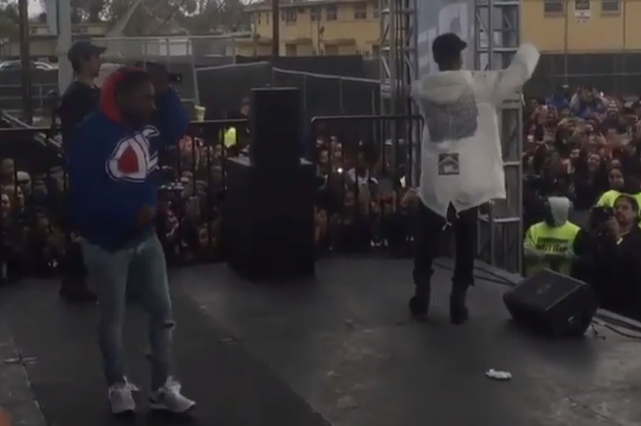 At the show, Kendrick Lamar and other TDE members performed, along with guest spots from Big Sean and Ty Dolla $ign. Lamar performed To Pimp a Butterfly track “Alright,” Black Hippy performed “Vice City” from Jay Rock’s 90059, Big Sean played “Blessings” from Dark Sky Paradise, and Ty Dolla $ign leapt into the audience during a performance of “Blasé.”

Check out some fan-shot footage below via Complex:

Also in Kendrick news, the rapper published an essay yesterday in XXL reflecting on how his life has changed since the release of his first record, good kid, m.A.A.d. city, and this year’s To Pimp a Butterfly, which SPIN recently listed as its top album of the year. Here’s an excerpt below:

It’s funny because I ask other artists about their experience with success. I wanna know what happened to them. Did you feel how I feel? When did everything change for you? When did you start noticing the ways you were acting differently? Or when the people around you changed how they treated you? Or just, how did your world change? For me, the whole complete world changed within six months of good kid, m.A.A.d. city coming out. It wasn’t about the money change, although that did happen, but it was like I started seeing who I really was during that first run and learned more on the second. Either you notice who you are or what you ain’t pretty fast when you get fame.