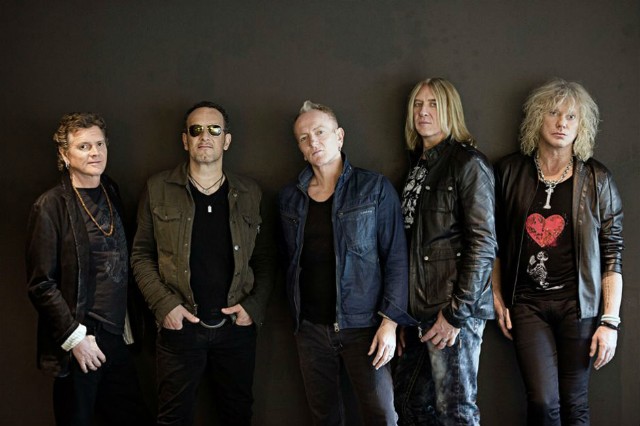 For 38 years now, Joe Elliott and his bandmates in Def Leppard have, to enormous success, been unabashedly comfortable in embracing their anomalous genre identity: too metal for pop fans and too pop for metal fans. That conundrum has never really dampened their success, anyway, with the band’s two diamond-certified albums, 1983’s Pyromania and 1987’s Hysteria, putting them on a very short list with just four other artists who’ve been able to achieve such a milestone. Record-setting sales aside, Def Leppard’s influence on other artists over the years has proven just as atypical as the band itself, with their distinctive sound finding its way more into the pop world of artists like Lady Gaga, Carly Rae Jepsen, and Miley Cyrus than with anything resembling metal.

Given how the ire of metal fans is so often provoked by the level of actual appeal a band manages to have, Def Leppard’s crossover nature has — to their benefit — put them at odds with their more straightforward be-pentagrammed contemporaries. But Def Leppard have been and always will be a pop band, a fact driven home on with the band’s roundly affirmative and hook-stuffed self-titled LP, released on October 30 via Mailboat Records. SPIN talked with Elliott about the band’s influence on today’s Top 40 artists, as well as what made the band’s self-titled effort their most honest work to date.

It’s been seven years since Songs from the Sparkle Lounge, making this the longest Def Leppard has gone between albums. Was that wait a deliberate decision?

Not really. The length of time was just what it was because we weren’t really planning on making a record at all. It could have gone on a lot longer had things not been the way they were. When we finished and released Songs from the Sparkle Lounge, it was the last album that we were contractually obligated to deliver to Universal Records. We were well aware of that when we were making it, so it was kind of like an end of an era… It’s a good album, I think. It has some good songs on it, but we just did it because we had to, and it’s what you do. You tour, you make an album, you tour, you make an album. We were in that hamster wheel, if you like.

When it came to doing this album, we didn’t have a record deal. We were watching, reading, hearing the world tell us that the album [format] is dead. We weren’t happy with what we were hearing. We didn’t necessarily agree with it, but we were listening because that’s what you do in the digital age, and we were thinking: Well, okay, some of these bands we’re aware of have been releasing maybe one or two songs on the Internet instead of doing albums, maybe we’ll try that and see if it works. We did three new songs on the end of the live album back in 2011… so we thought we can still do this. Let’s just do these three songs and see what we get.

We all got together in my studio in February of last year and started playing things and recording it on our phones. All of a sudden we had 12 songs up for ideas…. then the thing just evolved. It was like, well, why do we have to pick three? Why can’t we just put them all out? All of a sudden, then we had an album… It’s the most natural, artistic thing that we’ve ever done, because we weren’t tied down to some label or an executive from said label hovering over your shoulder looking for the hit, looking for the delivery date, keeping it on budget, and all that nonsense that comes with what is essentially a juvenile line of work. We did a bit of work for the new record in hotel rooms and dressing rooms during the tour last summer, because these days you can do that. You don’t need to be in Abbey Road to make Abbey Road. We chiseled away at it in our own good time.

It’s definitely a combination of Def Leppard’s various stages and influences sort of filtered through this more relaxed sound.

Which is why we decided to call it Def Leppard. There were a lot of little influences, and we had friends asking us, “C’mon, man. Tell us what the album sounds like,” and we all found ourselves not knowing. Each of us was just saying, well, it kind of just sounds like Def Leppard. [Laughs.] Then one day when we made reference to the fact that we’d all been saying that to various people, Phil said, “Well, let’s just call it Def Leppard then.” That was it. We’ve been jokingly saying ever since that Peter Gabriel’s got four albums out called Peter Gabriel, so we’ve got three more runs of this if we want.

One of the most distinctive things about Def Leppard has always been the band’s ability to appeal just as much to pop fans as you do hard rock and even metal fans. It’s even more noticeable now, with many of today’s hugely successful pop stars either explicitly citing you guys as an influence, or doing so implicitly with their music. Is that something you’ve seen more recently as well?

I notice when it’s pointed out to me, because I honestly don’t listen to much pop radio. But when I am made aware of it or just happen to be listening to whatever radio station my friend is tuned to in their car, it’s like, “Whoa, that sounds a bit like we could’ve done it.” I started becoming aware of our influence in pop music about 15 years ago when Pink did a radio show with us, and she was standing on the side of the stage singing every word. I was like, well okay, she’s a fan. [Laughs.] We have people like Jewel or John Mayer or the guys in Maroon 5, all of whom are huge fans. It wasn’t just Ratt and Poison we were a part of…. [now] all of a sudden you’ve got Lady Gaga coming out and saying, “I f**king love Def Leppard,” and we had Taylor Swift wanting to work with us six or seven years ago when she was first kicking off.

You are aware of it, and it’s flattering, but I think it’s down to the fact that we’ve always been more pop than metal, much to the annoyance of the metal press and metal fans. We were never Dio or Anthrax or Judas Priest… We’ve always been about [blending] that kind of quirkiness that Queen had with the power of AC/DC. It’s something we’ve always felt was kind of our blueprint. So I absolutely hear it in pop because that’s essentially who we were. Def Leppard became popular not through being a rock band like Zeppelin or Sabbath. We became popular because our singles were on American Bandstand between Kool & the Gang and Michael Jackson. We were the white rock band from the U.K. that people were like, “What? How did they infiltrate the top ten?” And it was because we had these infectious melodies. We weren’t afraid of singing about relationships or love, which is something that metal would never do. We were never Dungeons & Dragons. We never will be.

Which would naturally explain why the band has been so successful, because it’s difficult to compartmentalize you guys into any one genre or sound, even with the early associations with the New Wave of British Heavy Metal, for example. It’s risky, but it’s obviously proven to be well worth it for Def Leppard.

We didn’t ask to be included in the New Wave of British Heavy Metal. We were just told we were in it by a journalist. We were happy to take the press, but the fact that it kept coming with this NWOBHM typecast, it became more of a “What the hell is this?” thing. We just kept having to say, “Well, it’s because of all these bands like Iron Maiden and Saxon and whoever else are coming out of England at the same time.” So it was really more of a time-zone reference. Well, you might as well throw in Duran Duran and U2, because they came out at the same time as well, because I think musically we’ve got more in common with those two bands than we do with Iron Maiden. I’m not criticizing Iron Maiden, either, and I never have when I’ve used that comparison. It’s not a criticism where we think we’re better than them. We just think we’re different… We’re a hardcore, hard pop band. They’re not.

Over the years people seem to think that I’m annoyed by it, or that I get angry at the association like some kind of irritated Bob Dylan-type, but it’s not that at all. It’s just that it keeps getting mentioned the same way that we keep getting mentioned in America as one of the hair-metal bands. Are you kidding me? I mean, really. If metal is based on the length of your hair, then what are Led Zeppelin? Are they a hair-metal band? Is Iggy Pop metal because his hair’s down to his arse? It’s the dumbest, most idiotic, lazy journalistic reference ever thought of, and it’s just rubbish. I mean, you obviously sound like you’re invested in this, but sometimes a journalist is assigned to me by an editor, and you know they’re thinking: “Really? I want to talk to Dave Grohl, not him.” So consequently you get the s**t end of the stick, and you’re always gonna get that, but at the end of the day it’s all fun and games. I don’t get annoyed by it. I just keep knowing, as I will for the rest of my life, that they’re wrong. [Laughs.]

The album was Every Picture Tells a Story by Rod Stewart. It was the first album I ever bought, and it was the first album I ever wanted to save all my pocket money for to buy. The first artist that I got into was Marc Bolan from T. Rex. Everything he did, the whole catalog, I wanted to be Marc Bolan. David Bowie when he did “Starman” on Top of the Pops as the first single from the Ziggy Stardust album, that blew me and everybody away. That song is the reference spot to so many different diverse artists — Boy George, Morrissey, Gary Kemp from Spandau Ballet — all have said in the press that when they saw Bowie do that and threw his arm around Mick Ronson, that that just made them want to go out and buy a guitar or be a singer.

But the song that I’ve always said is my favorite song of all time and the one song that I’ve tried to write myself a million times and failed miserably is “All the Young Dudes” by Mott the Hoople, who are my favorite ever band in the world, as weird as that might sound. But “Young Dudes,” written by Bowie and recorded by Mott the Hoople, is the best song of all time. I tried to rewrite it on “We Belong.” Didn’t get there, but you can tell it’s a reference to it. Elton John once said to me, “If you’re in doubt, write a hymn,” and I tried to make that very biblical in its size and swagger, which I’ve always found “All the Young Dudes” to be. It’s never aged. It never will. It will sound as good in a hundred years’ time as it did in 1972.