The way creator Mel Brooks tells it, Max Bialystock (Zero Mostel) and Leo Bloom’s (Gene Wilder) falsified salute to the Third Reich was initially a ploy to produce a flop so terrible that it closes on opening night and the duo pocket investors’ shares. But it backfires — badly. What’s meant to be an offensive “love letter to Hitler” ends up being taken for a satire. With jaw-droppingly distasteful lines like “Springtime for Hitler and Germany / Winter for Poland and France,” and “Don’t be stupid, be a smarty, come and join the Nazi party!,” this gleefully subversive show tune is genuinely clever and disturbing enough to be perceived as such. It’s just a shame the play’s showrunners are themselves too dopey and money-hungry to see it. — R.B.

We’ll see what happens with Opera Noir, but it’s entirely possible that Empire marks Timbaland’s last great pop impact. That’s no knock on Timbo: He and frequent collaborator Jim Beanz are responsible for the show’s chart credibility, making Jamal’s auteurist compositions and Hakeem’s careerist pop-rap believable. The latter’s “Drip Drop” is the focus of the John Singleton-helmed episode “Dangerous Bonds.” Hakeem (Bryshere “Yazz” Gray) has a vision for the “Drip Drop” video while his oldest brother, Andre (Trai Byers), tries to frame him for masterminding the attempted robbery of Jamal (Jussie Smollett). The plot’s as convoluted as the song — Luda’s “Splash Waterfalls” with a sick-making synth-bass — is simple. Jamal’s “You’re So Beautiful” was a plot fulcrum, but Yazz — and Timbaland — got “drip drippity drop” lodged in America’s brain for weeks. — B.S.

If the makers of How I Met Your Mother were as good at every aspect of TV creation as they were at writing fictional songs, the show would be more fondly remembered than Friends and Seinfeld. Canuck teen idol Robin Sparkles rose from the ashes of the late-’80s mall-pop explosion — by Robin’s own explanation, Canada didn’t get the ’80s until the mid-’90s — with a handful of pitch-perfect period singles, the best of which was the effervescent “Let’s Go to the Mall.” Recycling the era’s clichés (robot vocoders, skater ‘tudes, and brat-rap breakdowns among them) was a necessary start, but “Mall” took things to the Upper Plaza level with its inspired integration of north-of-the-border icons (Wayne Gretzky, Canada Day, Prime Minister Brian Mulroney), and a chorus that was indeed as brain-burrowing (and persuasive!) as any that Tiffany or Debbie Gibson ever inflicted upon the public. See you at the food court, Robin. — A.U. 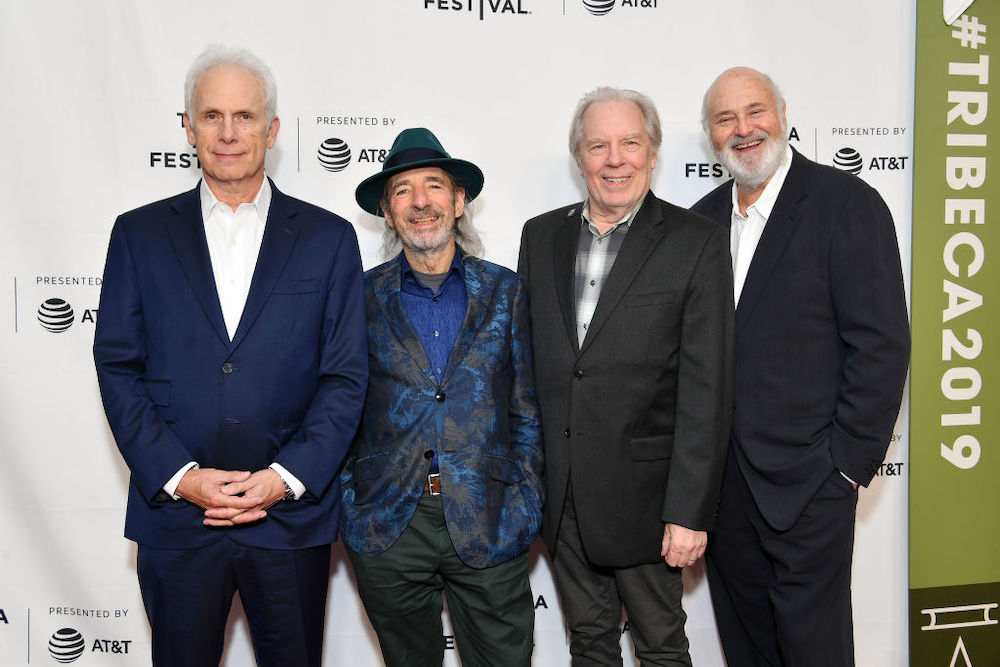 “Rock’n’roll, mate!” snarls Charlie Hieronymous Pace, otherwise known as once-and-future hobbit Dominic Monaghan, at the beginning of “You All Everybody,” a song that’s essentially the equivalent of a stock photo for Britpop. Somewhere between Spinal Tap and Oasis, Drive Shaft is a blessed reminder that groupies and sleeveless cutoff tees — not to mention those pint-slinging, fun-chasing riffs — exist even in a parallel universe that never entirely makes sense. But rock’n’roll will never die, even as Charlie snuffs out his heroin addiction and flashes sideways to a better place where Drive Shaft avoided the $2 bargain bins. Regardless of whatever mythos LOST became bogged down in, “You All Everybody” remains an irrationally catchy cliché. — H.B.

How to rib the Beatles in the 1970s? The Rutles poked lightly at the phenomenon for the benefit of everyone in between the punks and the baby boomers and made jokes a bunch of pre-teens would find hysterical. The Faux Four’s repertoire was music’s most spectacular feat of pastiche, a high-wire act (choreographed by Neil Innes of ’60s psych-comedy outfit the Bonzo Dog Doo-Dah Band) whose oddball music-hall recordings were a favorite of the Beatles themselves. “I Must Be in Love” — originally appearing in a sketch on the BBC’s Rutland Weekend Television program, but revamped for the feature-length TV biopic All You Need Is Cash — was the “hit” from A Hard Day’s Rut, a chiming blob of 12-stringed taffy whose woos and first-draft lyrics were both dead-on. No wonder George Harrison felt obligated to take part. — B.S.

Long before “Anaconda” or “My Humps” or even “Baby Got Back,” the world’s greatest fictional hard-rock band was delighting in gluteal double entendres we didn’t even know how much we needed: “The looser the waistband / The deeper the quicksand / Or so I have read,” sings David St. Hubbins. The later rhyming of “Monday” with “My lucky BUN-day” alone is worth the price of admission, until it ups its own ante with “weekday” and “velvety cheek day.” The arena histrionics, noodling art-rock synth, and obvious homage to Queen’s “Fat Bottomed Girls” ensure the masterfully funny lyrics hit their target like a tranquilizer dart into butt flesh. How could we leave this behind? — D.W.

Music and Lyrics is an enjoyable trifle, a slightly above-average rom-com with a generally winning cast. But it’s clear the movie’s songwriters had more fun than anyone else involved: Writing up the musical backstory to Hugh Grant’s ex-new wave star inspired a handful of early-MTV pastiches that were even better than the real thing. “Pop! Goes My Heart” in particular was imminently Just Can’t Get Enough-worthy, with vocal inflections passed down directly from Martin Fry of ABC, synth twinkles and drum claps that could’ve come straight from Shep Pettibone, and a chorus that more than earns PoP! their Choose Life stripes. Scribes Andrew Wyatt and Alanna Vicente understood both the big hooks and the little quirks that made ’80s pop unforgettable, and the Proustian rush that comes with one “pop” sound effect is greater than all of Hot Tub Time Machine. — A.U.

Ignore this song’s connections to the King of Pop. (MJ famously voiced “himself” in this early Simpsons classic but couldn’t do any singing due to contract issues.) While it’s amazing in a peak-‘90s pop-culture sort of way, “Happy Birthday, Lisa” doesn’t bloom and endure as a song just because of a deft impersonation — it’s a simple, beautiful expression of sibling love. And while the subtle piano keys and garbage can-turned-bongos play well with Not-MJ’s angelic vocals, it’s Nancy Cartwright’s perfectly imperfect performance as Bart that rings so true. We knew him as a little brat, and this earnest sentimentality — prompted by a bricklayer from New Joisey who found that pretending to be Michael Jackson made everybody happier — showed there was more to America’s new Dennis the Menace than his quickly dated catchphrases. “Happy Birthday, Lisa” celebrates the warmth of a purely good deed, even if there are a couple of layers of deception behind it. — J.G.

“Sugar Sugar” has been so sublimated into the culture’s subconscious that many might not even have known that this rot-your-teeth standby was originally done by a cartoon pack of high-school kids. But such a knowledge gap should give you an accurate portrayal of just how pervasive this classic ditty has been since its inception in 1969 — it’s been covered countless times, by artists as diverse as Wilson Pickett, Alex Chilton, Bob Marley, and Gladys Knight. With three studio musicians (Ron Dante, Toni Wine, and Andy Kim) voicing Archie Andrews, Reggie Mantle, and Jughead Jones, the Archie Comedy Hour plopped the preternaturally infectious cotton-candy jam into households worldwide, a song so unapologetically fundamental in its hookiness that it would feel satirical if its sweetness wasn’t so un-saccharine. “Sugar Sugar” proves that even at its least intellectual, pop is still never ephemeral; when both Def Leppard and Gorillaz can trace their lineage to you in some way, you’re as important to modern musical history as anyone. — R.B.

Writing a fictional Beatles song is impossible; no imaginary song could ever approximate the excitement of an iconic, precedent-setting classic like “I Want to Hold Your Hand” or “A Hard Day’s Night.” Writing a mock Gerry and the Peacemakers song is a lot more achievable, and no less noble — the fabric of pop music is stitched together just as much by its followers as its leaders, and while there’s no improving on the Beatles, you’re never out of the running for writing the greatest Fab Four knock-off ever. If it’s good enough to reach the top ten — the song peaked at No. 7 in the movie, and fell just short of the actual Top 40 in ’96 — without ever threatening to top the charts, even better. The Wonders didn’t need to hit No. 1, just like they didn’t need to record a second single; to endure as a half-as-long, twice-as-bright memory was the ideal fate for the song, in both film and real life.

“That Thing You Do” does top this chart, however, mostly because it turns a good movie into a great one, all on its own. The rise-and-fall tale of the made-up ’60s one-hitters has given cable TV one of its evergreens for nearly 20 years now, with a smart script, a dynamite cast, and a Gen X-spun, Reality Bites-like central love triangle that keeps it from drowning in nostalgia. But without that song — a song good enough that it could plausibly change the lives of four schmoes from Erie, Pennsylvania; a song that sounds like the senior dissertation from one of the most precocious students of pop history in recent memory; a song whose ringing guitars, three-part vocal harmonies, and confoundedly bittersweet lyrics could’ve killed in any mid-’60s Liverpool jukebox — then the movie is a footnote, an answer to a trivia question. “That Thing You Do” ensures that whenever its parent movie is on, you have to watch it until you hear its title track at least once. And that’s the only thing you can really ask a fictional song to do. — A.U.