What we gonna do with all that junk? 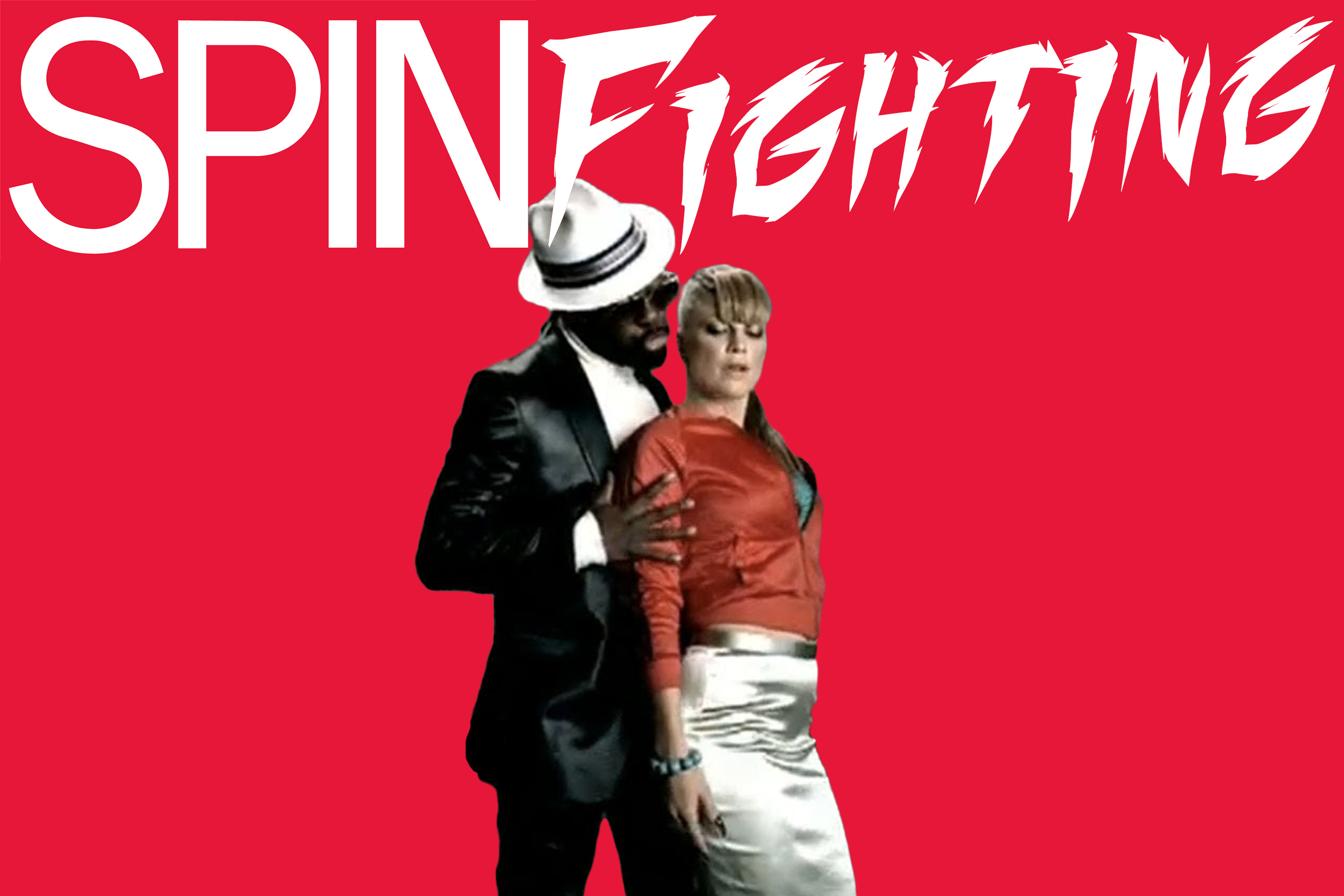 As the roundtable format has grown into an effectively direct way for a publication to think out loud for its readers’ perusal, we present SPINfighting, a new column where the SPIN staff will debate about a new wrinkle in the musical landscape every week. In this edition, we discussed one of the most polarizing songs in recent memory, the Black Eyed Peas’ “My Humps,” which celebrates its 10th anniversary as a single this week. Is it one of the worst songs of all time or has it improved with age?

Dan Weiss: What was your first memory of “My Humps?”

Harley Brown: I honestly do not remember, it’s all a blur of awkward high school dances. Maybe on the field hockey bus?

Andrew Unterberger: Like Wikipedia or Spotify, my brain can’t really process what my life was like before it.

James Grebey: I can’t remember a time before “My Humps.”

Harley Brown: I ?do? remember the first time I wanted a pair of Fergie’s jeans in the video, which I believe are boutique Target.

Andrew Unterberger: I do remember thinking it seemed unlikely that it wasn’t a joke.

Dan Weiss: My story is that I loved “Don’t Phunk With My Heart,” and was actually preparing to enjoy a Black Eyed Peas album, so I downloaded and put it on, and “My Humps” was early in the track list, and I burst out laughing and remember the urge to instantly show at least one friend the song. It wasn’t a single yet and it wasn’t planned to be; it was almost proto-viral in the way plans were quickly changed to rush out a video for it. Then everyone else I knew caught wind of it and I quickly became aware of how hated it was.

Brennan Carley: I can remember it. I was in the car on the way to a rehearsal for Honor Band (I played clarinet, Miley what’s good) and in the car it came on Z100, and my friend and I freaked out.

Andrew Unterberger: In a good way?

Brennan Carley: Yeah, I think we liked it.

Dan Weiss: It’s one of the most hated songs of my lifetime; I feel like I didn’t actually have time to process my own opinion of “My Humps” before everyone else’s hatred made me feel protective of it.

Harley Brown: I do remember thinking that humps were a bad thing, like, lumpy as opposed to curvaceous.

Andrew Unterberger: Yeah, the phrasing was off-putting, it sounded more tumorous than sexual.

Harley Brown: I was thinking of a sock.

James Grebey: Also, at one point she refers to it as a hump, singular.

Harley Brown: Well I think she is referring to her butt, but then will.i.am talks about breasts inside the shirt, so wouldn’t that be three lumps?

James Grebey: Is a butt one lump or two? To be honest, I still don’t understand what a hump is. I was unclear on the specifics when I was 13, and still unclear at 25.

Harley Brown: I think the Black Eyed Peas take themselves very seriously, or more seriously than they should.

Andrew Unterberger: I do remember being specifically terrified that I would end up liking the song someday.

Dan Weiss: I find it hard to believe that the Peas themselves didn’t think the song was every bit as ridiculous as everyone else did.

Andrew Unterberger: I would bet that at some point in the recording process someone looked at will.i.am and was like, “Really?” And he was like, “Trust me.”

Brennan Carley: Taboo. I bet Taboo was the Judas.

Dan Weiss: Is it that weird for pop to bank on a silly catchphrase? Or a string of them? What made this one so appalling?

James Grebey: It’s a weirdly morose song, like, will.i.am is the only levity in the entire thing. Fergie sounds like somebody died in the chorus, maybe her inside.

Andrew Unterberger: It was mostly the phrasing I think, it was a combination of outdated and gross in a very PG-13 sort of way.

Dan Weiss: Am I the only person here who likes the song then? To this day it stuns me how despised it is and was, even for a dumb song about T&A.

Andrew Unterberger: No, I would say that I’ve come around to it, the Black Eyed Peas were bolder than we ever gave them credit for.

Dan Weiss: I do think all the worst parts of the song are easily will.i.am, his verse sounds like a Miley/Flaming Lips song: “The Milky Milky Cocoa Puff.”

Harley Brown: There are worse things he could have said, though.

Dan Weiss: I also like how this is the song where the Black Eyed Peas basically admitted they really just did not need the other two guys. Will.i.am and Fergie were the Captain and Tennille of the Good Ship Ass.

Andrew Unterberger: I think it’s the confidence that draws me to it in retrospect, the lack of checking themselves in the name of good sense or even lyrical logic. To just bet that a bunch of ambiguous catchphrases over an electro-funk beat would be able to elbow its way onto Top 40 playlists and such. And you forget, nothing else in 2005 pop sounded like this.

James Grebey: “Hollaback Girl” was 2004? I’d say that was similar, a booming yet minimalist song with a confusing core concept.

Andrew Unterberger: Yeah, “Hollaback Girl” used the same kind of structural math, but nobody was throwing back to ’80s electro like will.i.am.

Dan Weiss: I think the song’s first-person POV made it a “Feeling Myself” before its time; if Nicki did this song — and with “Anaconda” she kind of did — it would’ve been celebrated. I would say that Fergie didn’t quite have enough likable personality to swing this in the people’s favor like Nicki would’ve.

Harley Brown: Wellllll, times changed a lot between then and now. I think the junk-in-the-trunk cultural conversation has come a ?long? way since “My Humps,” which is great.

Brennan Carley: Should we talk about how much of the song’s success hinged on Will’s production and how much was Fergie’s singing? For me, Fergie always ?made? BEP songs; she was the reason I came to them. And you could say this is the warmup for Fergie’s solo career. Will is a cornball and his production always jumps right over the line between actual good pop and like, derivative nonsense.

Andrew Unterberger: Will.i.am realizing his place his as sideman, just spelling out “Fergalicious” for her.

Andrew Unterberger: Maybe, but she’s representative of the group’s ethos of force-of-will over conventional wisdom; like, an ex-member of Kids, Inc. and Wild Orchid should not be able to key a booty jam like this.

Harley Brown: To be fair, “Anaconda” was ?much? better than “My Humps,” like, incomparable.

Dan Weiss: I don’t agree with that, I think they’re pretty comparable.

Dan Weiss: Yes, and “Baby Got Back” was not hated like this song.

Harley Brown: But “Baby Got Back” is much more entertaining and interesting. It’s more of a skit, really, and the lyrics are more creative.

Dan Weiss: But we don’t think the institutional bias against the sex object herself having agency factors into why we prefer “Baby Got Back?”

Dan Weiss: But she takes the fall for it. Pitchfork at the time referred to her pissing her pants onstage as karmic.

James Grebey: And her agency is in response to will.i.am’s questions; her humps exist, in the world of the song, to make a man scream.

Dan Weiss: Will.i.am is in thrall to her though, she’s got him spendin’.

Andrew Unterberger: I think “Baby Got Back” was just more clever. Like, that song’s witty. There’s nothing witty about “My Humps.”

Dan Weiss: I prefer how “My Humps” doesn’t explicitly specify sizes like “little in the middle” or “36-24-36,” it’s the rare one-size-fits-all body-posi anthem. The lumps don’t need to be big or small, they’re just happy to be there.

Andrew Unterberger: “Baby” was a legit response to supermodel culture, and its emphasis on beautiful and skinny women maintaining an impossible figure.

Dan Weiss: But isn’t it just about maintaining a different kind of impossible figure? I’m not convinced that Fergie celebrating her curves is for will.i.am’s consumption, he’s just there, pulled in.

Andrew Unterberger: The song is dumb, but it’s catchy in a singular way and the beat knocks. I wouldn’t listen on my own, but I am at the point where I’d be glad to hear it on the radio.

Brennan Carley: I think my last listen intentionally was at a “Trash of the ‘00s”-themed party I threw in college, and that was an ironic listen. Like, BEP played the Super Bowl, good for them, they did the thing, but they’ve done nothing of ?real? cultural importance I don’t think?

Brennan Carley: Well I suppose they dumbed it down just enough to allow the masses in.

Dan Weiss: I think it’s got a lot of subtlety musically, amazing as that sounds. The big distracting hook overshadows lots of tiny ones: “Make you scream, make you scream,” The little “Ooo-oo-ooo” that follows “She’s got me spendin.”

Andrew Unterberger: Also worth remembering: without this song, there’s no this scene, and without that scene, there’s no “Niggas in Paris.”

Harley Brown: I’d like to end this with a quote from Sir Mix-a-Lot: “A lot of simps won’t like this song / ‘Cause them punks like to hit it and quit it.”