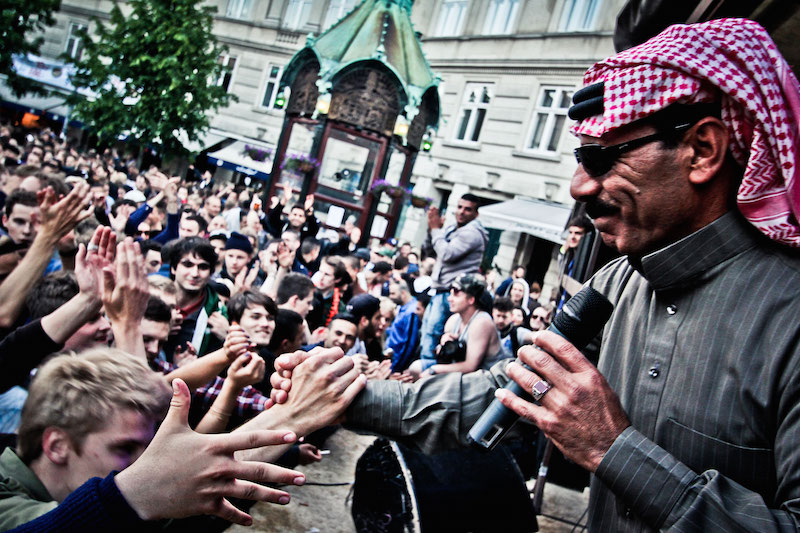 Expressionless and inscrutable behind his sunglasses and underneath a red keffiyeh, Omar Souleyman betrays little — lighting a cigarette and gesturing slightly with his hands is about as emotional as the Syrian electronic dabke singer gets. Even onstage, as the crowd gyrates ecstatically to a breakneck BPM of shimmering oud, skipping handclaps, and a hypnotic succession of beats, he stands nearly stock-still, perhaps occasionally gliding from foot to foot. But in the video for “Badheni Nami,” the title track off his second studio album — many of the voluminous recordings cut straight to tape from his wedding performances have been assembled and released by Seattle label Sublime Frequencies — he lets down his guard very, very slightly: in one clip he lays back (somewhat awkwardly, as if unused to yielding his composure) against a broad couch while singing mellifluously romantic lyrics in Arabic like, “The kiss from your lips melted mine.”

That’s because, he tells SPIN over the phone through a translator, he’s a little more relaxed this time around. Rather than record his new album in Brooklyn, as he did with Wenu Wenu, his Four Tet-produced introduction to the Western world, Souleyman — who carries on a tradition he learned in his impressionable youth from dabke singer Sahdel Al Harbawi Mawal — spent about eight months working with local, traditional instrumentalists at Babajim Studios in Istanbul. “[I] was trying to exchange the place of recording this time,” his translator says. “For the next album, maybe [I’ll] record it in the U.S., or Europe, or another country.”

Despite the currently dire political situation in that area of the world, Souleyman “found an easy permit to record in Istanbul.” After a long, muted silence on the other end of the line, he declines to comment further on the civil turmoil he and his music have often been unavoidably associated with. Bahdeni Nami’s press release elaborates, “Despite world’s insistence to associate him with his home country’s unending war, Omar gives back nothing but Love.”

Such overseas and inter-country collaborations will likely much easier now that, in addition to Kieran Hebden behind the decks, Souleyman also enlisted genre-hybridizing U.K. producer Gilles Peterson and Berlin-based DJ duo Modeselektor for production on a few Bahdeni Nami tracks. “We’ve known Omar Souleyman for years now already, especially from running into him backstage at many festivals, like our MeltSelektor stage at Melt! Festival,” says the latter’s Gernot Bronsert and Sebastian Szary over email.

After asking him to contribute a track to their compilation series Modeselektion Vol. 3 — the fierce “Edamat,” pulsing with deep, clipped drum poomps and Souleyman’s distantly radio-fuzzed verses, the Syrian singer asked them for the same on his album. The results were “Leil el Bareh,” galloping through transfixing oud warbles and finger-splitting licks from Azerbaijani instrument the saz; and the more dramatically electronic “Enssa El Aatab,” which deviates from the album’s penchant for more traditional instrumentation. Recording those tracks went so well, Modeselektor tell SPIN, that they signed Souleyman to their Monkeytown record label.

“We leave all our artists complete artistic freedom, so [we] don’t really interfere with the artist’s choices out of respect for all of them,” write Bronsert and Szary, who add that they communicated musical ideas with their soon-to-be new signee via email and through a translator over the phone. “And Omar is an icon and a pioneer — you can’t dictate him anything, and there is no reason to do that anyway!”

Despite his desire to record Bahdeni Nami closer to home because it was simply more convenient, and easier for him to access his session musicians, Souleyman continues to test-drive any new material in front of the most unforgiving critics: his audiences around the world, especially those that may have been slightly let down by the reduced speed and more serious subject matter of Bahdeni Nami. “Next time he makes a good song, he learns from it by seeing how the people receive it, how the audience receives it, and kind of works hard to find a new way to produce the new song,” his interlocutor translates. This time, it was more electronic producers and — somewhat counter-intuitively more traditional arrangements, like use of the saz and keyboards, than what was used on Wenu Wenu; the next time, “he’ll try to use different instruments.”

Review: Omar Souleyman Slows the Party to a Crawl on ‘Bahdeni Nami’