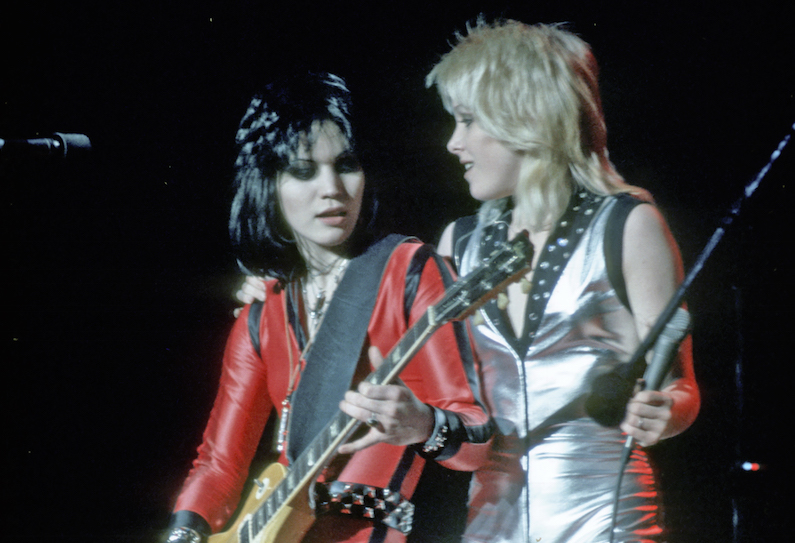 Update: Jackie Fuchs has posted a long statement to her Facebook page thanking her supporters, writing that their response took her completely by “surprise.” Read it below.

I have been so incredibly moved over the last few days by the outpouring of love and support that has followed the story of my rape on New Year’s Eve 1975.

When I contacted the Huffington Post at the beginning of the year, I never imagined my story would touch such a nerve. I wondered whether anyone would even read it, or if they did, whether they would care. The response took me completely by surprise.

This was not an easy story for me to tell. I had to go over the details of the worst night of my life, not once but repeatedly. The writer of the piece, Jason Cherkis, and the Huffington Post’s fact checker handled the questioning with great sensitivity; but in the wake of the Rolling Stone rape-reporting fiasco and the well-known past disagreements among members of the Runaways, they were leaving nothing to chance. They asked for my SAT scores, my school transcripts, contact info for the lawyer I spoke to last year. My family and I opened our homes and our files, without reservation. We gave Jason a glimpse into some of our most private moments, as well as some of our deepest – though thoroughly underserved — shame.

Jason spoke to people I hadn’t thought about in years — people who didn’t like me, as well as those who did. He spoke to every known living person who was there the night of my rape, save one. Jason contacted friends I’d lost touch with after I was raped, friends I’ve missed terribly. I had serious second thoughts about going public several months in. How would disclosure affect my family? How would it change how my friends saw me? Would I be known forever after as “that girl from that band, who got raped”?

I thought I had prepared myself for the haters — I was wrong. I was shocked by some of the vitriol; more so by the fact that nearly all of it came from other women. *But their voices were drowned by a chorus of support from women I respect and admire – women like Kathy Valentine, Maureen Herman and Jane Wiedlin. And then there are the private messages. The sheer number of people who have written to tell me their own stories of rape and abuse has been heartbreaking. Many have said they’ve never told anyone about their rape or abuse, or that the people they told didn’t believe them.
But they’ve also said that my story has given them hope that the dialogue about rape is changing. Some have reevaluated their own trauma in light of learning about the Bystander Effect. One person wrote that I had given her a gift: “the ability to see that the people in the room were victims too. Their behavior didn’t mean I deserved [the abuse]. It just meant they were afraid and didn’t know what to do.”

I know some people watching the online drama unfold have been discouraged by the lack of support I’ve received from my former bandmates. To which I can only say that I hope you never have to walk in their shoes. My rape was traumatic for everyone, not just me, and everyone deals with trauma in their own way and time. It took exceptional courage for many of the witnesses to talk frankly about how they felt. Most have apologized to me for their inaction that night — apologies that have been unnecessary, though welcome.

My rape also left scars on Victory and the other people who only experienced indirectly what happened that night. It can’t have been easy to listen to the way the band treated me after I left (treatment I was mercifully unaware of at the time). All I can say about what was said and done is that my bandmates were children who’d witnessed something criminal and tragic. I’ve no doubt they were dealing with it as best they were able. They had no responsible adults to guide them – only a rapist and his apologists.

If I am disappointed in one thing, it is that the story has become about who knew what when and who did or didn’t do what. That isn’t the story at all. It would be nice if everyone who was there the night I was raped could talk about how it has affected them over the years. But if they don’t want to talk it about, I respect that. It’s taken me years to talk about it without shame. I can only imagine what it must have been like to have watched it happen.

I only wish that if my bandmates can’t remember what happened that night – or if they just remember it differently –they would stick simply to saying that. By asserting that if they’d witnessed my rape, they’d have done something about it, they perpetuate the very myth I was trying to dispel when I decided to tell my story. Being a passive bystander is not a “crime.” All of us have been passive bystanders at some point in our lives.

If we have any hope at all of putting an end to incidents like these, we need to stop doubting the accusers and start holding rapists, abusers and bullies accountable. What we don’t need to do is point fingers at those who weren’t to blame for their actions.

Joan Jett and Cherie Currie have issued statements following The Huffington Post’s extensive cover story on ’70s teen-girl band the Runaways earlier this week, in which bassist Jackie Fuchs alleged that now-deceased manager Kim Fowley had raped her on New Year’s Eve 1976. According to Fuchs, who went by “Jackie Fox” at the time, band members Jett and Currie were present while Fowley was having nonconsensual sex with Fuchs. “I remember opening my eyes, Kim Fowley was raping me, and there were people watching me,” Fuchs told HuffPo, adding that her bandmates were among those people.

On Friday (July 10), Jett issued a statement via Yahoo! Music, which read:

“Anyone who truly knows me understands that if I was aware of a friend or bandmate being violated, I would not stand by while it happened. For a group of young teenagers thrust into ’70s rock stardom there were relationships that were bizarre, but I was not aware of this incident. Obviously Jackie’s story is extremely upsetting and although we haven’t spoken in decades, I wish her peace and healing.”

Now, Currie has followed suit and responded to Fuchs’ allegations on her Facebook page. On Saturday (July 11), she wrote:

“I have been accused of a crime. Of looking into the dead yet pleading eyes of a girl, unable to move while she was brutally raped and doing nothing. I have never been one to deny my mistakes in life and I wouldn’t start now. If I were guilty, I would admit it. There are so many excuses I could make being only one month into my sixteenth year at the time that people would understand but I am innocent. When I return from Sweden I will seek a qualified polygraph examiner to put to rest any and all allegations. I will make public the questions, answers and results of that test. I am a proud person but for this, I may need to open a Fund Me account since I do not know how much this will cost. I am not a rich person but a carver. I wouldn’t ask for funding for my new album because I am proud. I will prove I am telling the truth. I will not allow anyone to throw me under the bus and accuse me of such a foul act. I will fight for myself. It is the only thing I can do.”